Annual market grows by 44%, passes 50 GW for the first time

After a slowdown in 2013, the wind industry set a new record for annual installations in 2014. Globally, 51,477 MW of new wind generating capacity was added in 2014 according to the global wind market statistics released today by the Global Wind Energy Council (GWEC). The record-setting figure represents a 44% increase in the annual market, and is a solid sign of the recovery of the industry after a rough patch in the past few years. Total cumulative installations stand at 369,553 MW at the end of 2014.

“Wind power is the most competitive way of adding new power generation capacity to the grid in a rapidly increasing number of markets around the world, even when competing against heavily subsidized incumbents,” said Steve Sawyer, GWEC Secretary General. “Wind is a rapidly maturing technology, with proven reliability and competitiveness. Not only the low prices but also the cost-stability of wind power makes it a very attractive option for utilities, independent power producers and companies who are looking for a hedge against the wildly fluctuating prices of fossil fuels.”

China continues to drive global growth, setting a new record in 2014 with 23,351 MW of new wind power, representing 45% of the global market, and dominating the world-leading Asian market’s total installations of 26,161 MW. India’s 2,315 MW was a distant second, although the stage is now set for a new round of market growth in that country.

Africa’s largest wind farm came on line with the commissioning of the 300 MW Tarfaya plant in Morocco, and South Africa’s market made a strong start with 560 MW, pushing African totals to 934 MW.

“The wind power industry is a key solution to climate change, air pollution, energy security, price stability and a driver of new industries and employment,” said Sawyer. “Let’s hope the climate negotiators get that message and come up with something useful in Paris in December.”

For full report and graphs 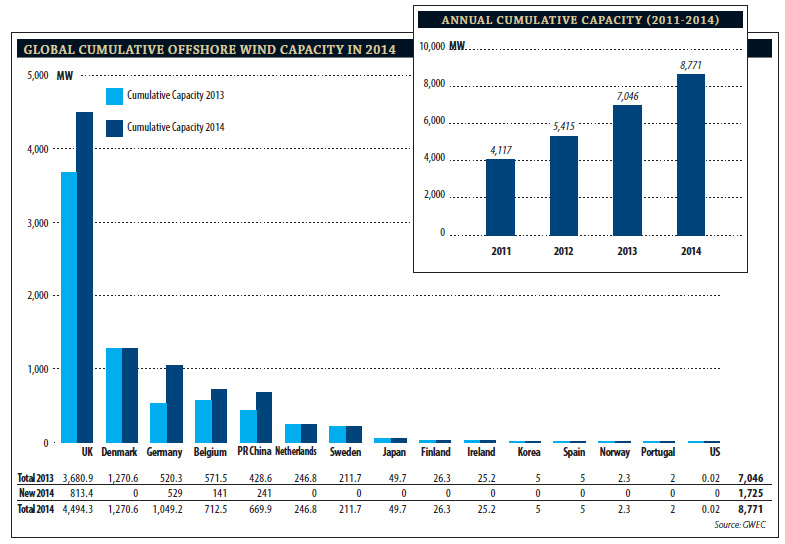