A new study conducted by the European Patent Office (EPO) and the United Nations Environment Programme (UNEP) shows that inventions in climate change mitigation technologies have seen a fivefold increase worldwide between 1995 and 2011. It also finds that Europe is a leading region for low-carbon inventions.

“Climate change is one of today’s truly global challenges, affecting all aspects of socio-economic development in every region of the world,” said Achim Steiner, Under Secretary General of the United Nations and Executive Director of UNEP. “This report provides a clear and comprehensive picture of the contribution of Europe to CCMT development and dissemination. It is hoped that this wealth of data can provide useful input for a constructive policy debate on technology.”

“New technologies are urgently needed to tackle the global challenge of climate change,” said EPO President Benoît Battistelli. “The report shows that in combination with clear legislation and policies to promote climate-change mitigation technologies, the patent system can support research, development and innovation in this field, as well as boosting trade and investment flows, and the transfer of these new technologies to other regions.”

A boom in green tech inventions

Presented at the Sustainable Innovation Forum 2015 organised alongside the UNFCC COP 21 in Paris, the report finds that the number of inventions in climate change mitigation technologies (CCMTs) worldwide has risen steadily since the signing of the Kyoto Protocol in 1997. This suggests that the implementation of climate change policies has helped stimulate innovation in CCMTs. The growth in low-carbon inventions has been much faster than in other technologies; today they represent nearly 6% of all of the world’s inventions, up from 2% in 1995. Public policies put in place after the Kyoto Protocol signing appear to have been particularly successful in encouraging the development of CCMTs in Europe. As a result, the carbon intensity of Europe’s GDP has fallen by 30% in the past decades, and has been the lowest in the developed world since 2000.

The study shows that Europe is among the leaders in technical advances towards a low-carbon economy. The region produces nearly one fifth of all low-carbon inventions in the world. Looking at “high-value” inventions (those with higher economic potential, for which patent protection is sought in more than one country), Europeans account for nearly two fifths.

Europe’s contribution to global inventive efforts is very significant across all CCMT areas. Most CCMT inventions in Europe (and also worldwide) are made in the clean energy and transport sectors, followed by buildings. When comparing CCMT inventions with inventions in all areas of technology, Europe has become increasingly specialised since 1995, and is now among the most advanced regions in the world in low-carbon technologies.

Six countries account for more 80% of all European inventions in sustainable technologies; Germany leads, with almost half of Europe’s CCMT inventions, followed by France, the UK, Italy, Sweden and Spain. Allowing for economic size, Germany is still ahead, followed by Sweden, France, Finland, Austria and Denmark. Meanwhile other countries, including Greece and Portugal, also show high degrees of technological specialisation in CCMTs.

Europe is also strong in trade of low-carbon goods; it is the biggest importer and second-largest exporter of CCMT products during the analysed period. At the same time, the region acts as a major source of Foreign Direct Investment in CCMTs, with investment spanning all continents. The study shows that cross-border patent filings go hand in hand with trade and foreign investment in CCMTs, which encourages international technology transfer of CCMTs through these channels.

A comprehensive source of information on green tech

Patent trends and statistics can give powerful and important early indications of technological and economic developments. In response to demand from organisations active in climate-change issues, the EPO has developed a dedicated tagging scheme for patent documents relating to climate change mitigation technologies. This greatly increases transparency and enables users – whether companies, engineers, scientists, institutions or policy-makers – to better access and use the wealth of information available in the EPO’s free patent databases. The new scheme, also in combination with patent statistics tools (such as the EPO’s PATSTAT), makes it possible to map sustainable technologies, identify trends and derive facts and evidence on which to base policy and business decisions. The EPO has just completed this patent classification scheme, which now covers all CCMTs, including energy, carbon capture, and low-carbon inventions in buildings, transport, production, waste and smart grids. To date, the databases contain some 2.8 million documents related to sustainable technologies – the biggest single repository of low carbon technologies in the world.

EPO-UNEP: shedding light on the debate 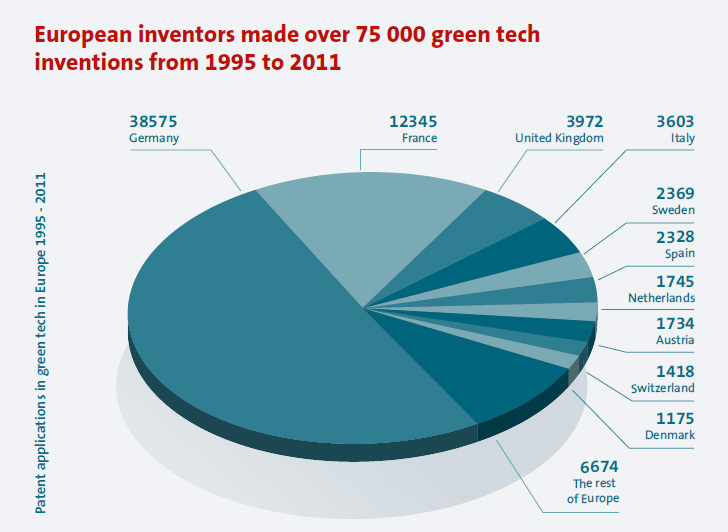