At this point most people know about neonicotinoids and the serious risk they pose to honey bees. Bees are a link in a chain of biodiversity and pollination of incredible value to our food production.

Up to 75% of our crops directly or indirectly depend on pollination. We need to start protecting our pollinators against the threat pesticides like neonicotinoids pose. In 2013 scientific findings in Europe lead to a partial ban of four of the worst bee-harming pesticides (clothianidin, imidacloprid, thiamethoxam and fipronil) – at least when they are used on crops which are attractive to honey bees.

Since 2013 research on the impacts of neonicotinoid pesticides has continued. Greenpeace France asked one of the leading institutes in this field, the Sussex University, to review all new science. Two independent scientists analysed hundreds of studies and pulled together a new report. The report paints an even more worrying picture. It reveals that neonicotinoids are not only a serious threat to honey bees, but also for a broad range of other animals, including bumble bees, butterflies, birds and even water insects.

Industrial agriculture: a threat to wildlife and environment

Some wild bumble bees are already in decline and becoming extinct. Neonicotinoids can be found in the plants of neighboring agricultural fields and in a wide range of different waterways, including ditches, puddles, ponds, mountain streams, rivers, temporary wetlands, snowmelt, groundwater and in the outflow from water processing plants. The data available for other species paint a similarly worrisome picture. Many farmland butterflies, beetles and insect-eating birds, such as house sparrows and partridges, come in contact with pesticides either directly or through the food chain. Water insects can get exposed to neonicotinoids through its leaching from agricultural soils, from sowing and spraying machines and from water systems in greenhouses. These toxic substances are in our environment, not just in agricultural fields.

The decline of our pollinators is a symptom of a failing industrial agriculture system which drives biodiversity loss, destroys foraging habitats and relies on toxic chemicals. Pollinators are routinely exposed to insecticides, herbicides and fungicide. If we’re going to take the protection of our pollinators seriously, we must fully ban bee-harming pesticides, starting with the three neonicotinoids.

To break our dependency on synthetic chemical pesticides we also have to move towards ecological alternatives.

Ecological farming maintains biodiversity without any chemical pesticides or synthetic fertilisers. It also increases the overall resilience of our ecosystems. Many European farmers are willing to change their agricultural practices, but are dependent on pesticides and fertilisers and stuck in this system.

Politicians must help farmers switch to ecological methods. They must eliminate the most environmentally harmful subsidies and shift public spending to research and solid rural development projects which include ecological farming. We have a long way to go, but it’s the only way to protect our birds, butterflies, bees and other pollinators.

The einvironmental risks of neonicotinoid pesticides: a review of the evidence post-2013 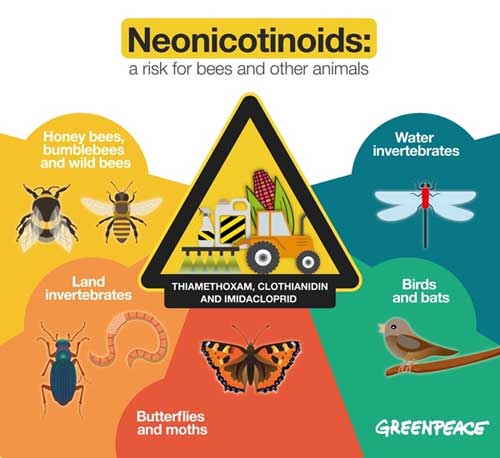