Autumn migration has begun ++ Overhead powerlines cause the death of millions of migratory birds worldwide.

Every year, several million birds are killed worldwide by powerlines which are not bird safe. A study carried out by NABU has shown that, in Germany alone, 1 to 1.8 million breeding birds and 500 000 to a million migratory birds die in this way every year. They collide with the massive electric cables and die from electrocution or from breaking their neck or other bones. The real number of mortalities remains hidden and is significantly higher. The fatal collisions are spread over large areas, and the many of the victims are rapidly consumed by carrion feeders. Moreover, the collision is not necessarily instantly fatal, and many of these birds will die later from their injuries, often far away from the powerlines.

“Overhead powerlines represent yet another man-made source of danger to add to collisions with cars and buildings, ongoing habitat destruction and illegal hunting. They are a particular risk to large birds with long wings, and especially now at the beginning of the migration season”, said Gabriel Schwaderer, Executive director of the internationally active foundation EuroNatur.

For the Network of European Stork Villages, founded by EuroNatur, electrocution is a hot topic. “Since our partners in some of the stork villages have insulated the electricity pylons, there have been no more fatal incidents. Even after the mitigation measures, it is often necessary carry out additional maintenance. For example, when storks breed on pylons, any protruding branches will increase the risk of electrocution”, said Dr. Stefan Ferger, project leader at EuroNatur.

BirdLife International and various partners, including EuroNatur, are now starting the second phase of the campaign “Flight for Survival”. Whilst its main focus is illegal hunting in the Mediterranean area, the campaign is also highlighting the dangers from electrocution and poisoning. 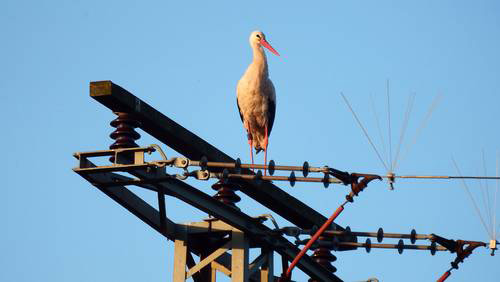