Neonicotinoid pesticides were first introduced in the mid-1990s and since then their use has grown rapidly so that they have become the most widely used class of insecticides in the world, with the majority being used as seed coatings.

Neonicotinoids are water-soluble, and so a small quantity applied to a seed will dissolve when in contact with water in the soil and be taken up by the roots of the developing plant. Once inside the plant it becomes systemic and is found in vascular tissues and foliage, providing protection against herbivorous insects. This prophylactic use of neonicotinoids has become extremely widespread on a wide range of arable crops across much of the developed world.

However, only approximately 5% of the neonicotinoid active ingredient is taken up by crop plants and most instead disperses into the wider environment. Since the mid-2000s numerous studies have raised concerns that neonicotinoids may be having a negative effect on non-target organisms. In particular, neonicotinoids were associated with mass poisoning events of honeybees and were shown to have serious negative effects on honeybee and bumblebee tness when consumed. In response to this growing body of evidence, the European Food Safety Authority (EFSA) was commissioned to produce risk assessments for the use of clothianidin, imidacloprid and thiamethoxam and their impact on bees. These risk assessments, published in January 2013, conclude that the use of these compounds on certain owering crops poses a high risk to bees. On the basis of these ndings, the European Union adopted a partial ban on these substances in May 2013 which came into force on 1st December 2013.

The purpose of this review is to collate and summarise scienti c evidence published since 2013 that investigates the impact of neonicotinoids on non-target organisms and to bring it into one place to aid informed decision making. Due to international concern over the unintended impacts of neonicotinoids on wildlife, this topic has received a great deal of scienti c attention in this three year period. As the restrictions were put in place because of the risk neonicotinoids pose to bees, much of the recent research work has naturally focussed on this group. 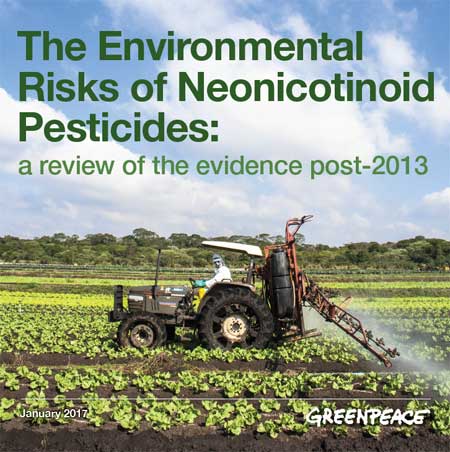