Rainforests saving the climate? Only as long as nutrient stores last!

How much carbon dioxide can tropical rainforests absorb? Investigations by an international team of researchers with significant involvement from the Technical University of Munich (TUM) indicate that the absorption capacity is severely limited by the phosphorus content of the soil.

Trees are seen as saviors in an era of climate change. Via their leaves, they absorb carbon dioxide and transform the greenhouse gas into oxygen and biomass. According to estimates by the International Panel on Climate Change (IPCC), the Amazon rainforests absorb a quarter of the carbon dioxide that is released each year from the combustion of fossil fuels. To date, global climate models have assumed that this absorption capacity will also remain constant in the future.

“But there has been no proof of this to date”, emphasizes Dr. Katrin Fleischer. “It is entirely possible that the absorption capacity will even decrease.” The ecologist from the Professorship for Land Surface-Atmosphere Interactions at the Technical University of Munich worked together with ecologists and ecosystem modelers from 10 countries to investigate the extent to which the nutrient supply in the Amazon region limits the production of biomass.

In doing so, the team did pioneering scientific work: To date, nobody has investigated this connection in depth, says Fleischer: “Most ecosystem models which allow the future development of ecosystems to be simulated were developed for the temperate latitudes, where there is generally sufficient phosphorus. However, in many areas of the Amazon region, it is in short supply – the ecosystem is many million years old, and the soil is leached of nutrients.”

The result: Additional carbon dioxide can be absorbed by the trees and transformed into biomass – but only if sufficient phosphorous is available. If it becomes too scarce, the CO2 fertilization effect once again decreases. The various models, which take into account different factors, predict a decrease in the theoretically possible additional CO2 absorption in the second scenario of 50 percent on average – whereby some even predict a 100 percent decrease in absorption.

“This would mean that the rainforest has already reached its limit and would be unable to absorb any more carbon dioxide emissions caused by human kind”, explains Fleischer. “If this scenario turns out to be true, the Earth’s climate would heat up significantly faster than assumed to date.”

How exactly the ecosystem would react, and whether the trees would succeed in absorbing additional phosphorous from the soil via enzymatic processes or by forming more roots which could bind and absorb the scarce nutrients needs to be researched in greater detail, summarizes the ecologist: “What’s certain is that the tropical rainforests are not infinitely resilient CO2 sinks.”

The findings of the study will now be included in the project AmazonFACE. During this field experiment in the Amazon rainforest, trees will be “fertilized” with CO2 in order to research the reaction of the plants and the entire ecosystem. The aim is to use the data collected to improve the ecosystem models in the future. This research was funded (among others) by the Deutsche Forschungsgemeinschaft (DFG) and the August-Wilhelm Scheer Visiting Professor Program of the TUM. 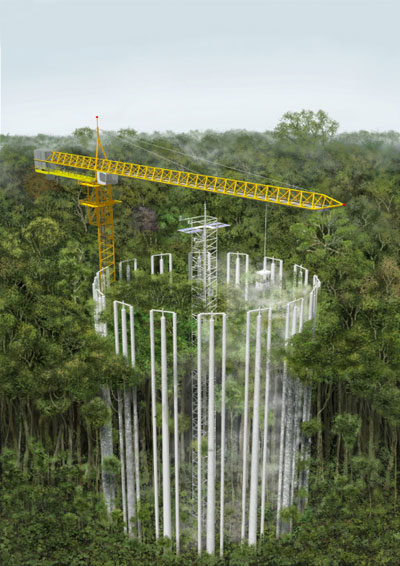