The annual whaling season in the North Atlantic began on April 1. The governments of Iceland and Norway keep ignoring the international ban on commercial whaling and continue to unilaterally authorise the hunting of minke whales and even highly endangered fin whales.

Whales are internationally strictly protected – commercial hunting is prohibited. That is why the international whale protection organisations OceanCare, Pro Wildlife and the Animal Welfare Institute are calling upon the EU to take up a leading role in the fight against commercial whaling, especially in view to the forthcoming whaling conference in autumn 2018.

Norway’s government has increased its annual whaling quota to 1,287 minke whales compared to 999 last year. Paradoxically, in 2017, the number of whales killed has plunged to 432 minke whales, the lowest number in 20 years. Also, there were just eleven whaling boats involved in 2017, a number almost halved from the previous year. “The gap between increasing quotas and falling actual catches, as well as diminishing demand for whale products is a clear indication that the Norwegian whaling industry is only kept alive for political reasons,” says Nicolas Entrup, Ocean Policy Consultant to OceanCare. Norway claims to have been setting national minke whale catch limits based on the calculations by the Scientific Committee of the International Whaling Commission (IWC). Far from it:

“Norway abuses the variables set by the IWC, so that instead of 300 minke whales in the North-East Atlantic, it is pretended that 1,287 whales are to be considered a sustainable catch quota,” Entrup said. “Leading cetacean scientists have not declared Norway’s – and Iceland’s – arbitrary quotas to be sustainable. Commercial whaling is cruel, unnecessary and unsustainable. The global ban must be enforced,” demands Entrup. Norwegian whaling has come under increased criticism since 2016 – also thanks to the Frozen in Time report by OceanCare, Pro Wildlife and the Animal Welfare Institute, which showed how modern Norway is clinging to its whaling past and how it undermines the IWC whaling ban. The report was presented to delegates at the last IWC meeting in 2016.

In 2017, a Norwegian documentary reported on a particularly problematic element of the hunt. Often, a high proportion of pregnant females are being killed, which means an enormous animal welfare and species protection problem. “The documentary at the time spoke of 90 percent of the whales killed to have been females and the majority of those to have been pregnant. To clarify, our current calculations show that almost 70 percent of the whales hunted are females, whereof 42.5 percent of them were pregnant,” says Kate O’ Connell a marine wildlife consultant with the Animal Welfare Institute. “However, even if the proportion of pregnant females is lower than initially assumed, this remains a severe problem. The foetuses experience the stress and pain of their mothers before their own death. The whalers also not only kill the current, but also the next generation.”

Iceland’s whaling at a turning point?

In Iceland, too, there is a gap between quotas and actual catches: fishermen are allowed to kill up to 229 minke whales; in fact, only 46 and 17 animals respectively have been killed in the last two years. “People in Iceland hardly eat whale meat any more. At present, tourists are the main customers. They taste whale meat and ignore the fact that they finance the hunt for minke whales”, says Dr. Sandra Altherr, biologist with Pro Wildlife. In addition, the government in Reykjavik is the only country in the world that unilaterally allows hunting for endangered fin whales: The influential millionaire Kristjan Loftsson could kill up to 154 fin whales in 2018 – but in the past two years he has refrained from hunting because the anticipated exports of fin whale meat to Japan have stalled. The new Icelandic government will soon have to decide whether it will continue to issue quotas in the future: “Especially now, pressure from the European Union would be particularly important to end the hunt for fin whales,” Altherr stresses.

Action needed by the EU

Since the ban on whaling was introduced, approximately 15,000 whales have fallen victim to explosive harpoons in the North Atlantic. It is surprising that in in light of these significant numbers “commercial whaling” is no longer even an item on the agenda of the International Whaling Commission meeting. The last time commercial whaling was criticised by the IWC member states was in 2001. Norway and Iceland use the silence by the IWC as an argument that their whaling activities are accepted.

At least the EU Parliament took action, assumingly also on the basis of the “Frozen in Time” report. In a strong resolution issued in September 2017, it called on Norway to finally stop whaling. The whale protection organisations are now hoping that at the next IWC meeting, the European Union will follow words with deeds.

“The member states of the European Union must no longer tolerate commercial whaling in European waters. We expect concrete political and diplomatic steps towards Iceland and Norway,” Entrup concludes. The next IWC conference will take place in Brazil from September, 10 to 14. 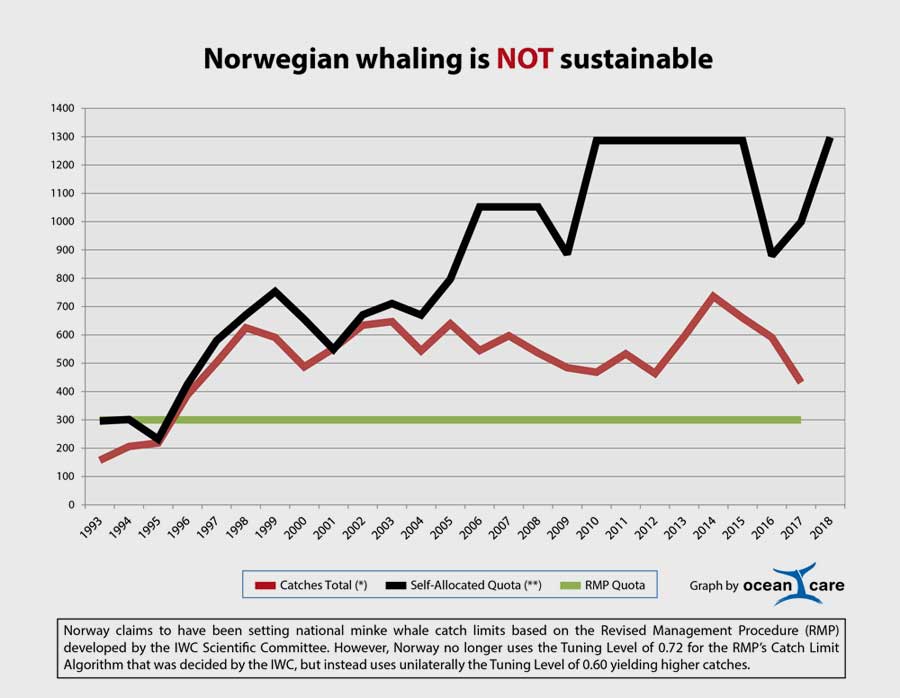