The “UNICEF Photo of the Year” 2019 tells of children’s brave struggle to survive in the face of three of today’s biggest tragedies happening at the same time: Poverty, environmental pollution and child labor. In his winning photo, German photographer Hartmut Schwarzbach portrays 13-year-old Wenie, fishing plastic bottles out of the water in the harbor of Manila (Philippines).

The second and third prize pictures document children’s vulnerability as well, but also their strength against the backdrop of harsh living conditions. Australian photographer Andrew Quilty has created a family portrait reminiscent of old masters that shows seven children in Afghanistan, none of whom have both legs left. Their injuries were caused by the detonation of an unexploded bomb in a remote village. This year’s third prize was awarded to Spanish photographer Antonio Aragón Renuncio for his photo series about child labor in goldmines in Burkina Faso.

“The UNICEF Photo of the Year creates closeness; closeness to children who are hardly noticed by anyone else. It shows their plight – but also their strength to keep going even under the harshest possible conditions”, explained Elke Büdenbender, patroness of UNICEF Germany at the award ceremony in Berlin. “Our message is clear: Children are the most valuable resource we have. We are all responsible for their lives and their future.”

“30 years after the adoption of the UN Convention on the Rights of the Child, the UNICEF Photo of the Year 2019 depicts the many areas where beautiful dreams are yet to become reality. It is an appeal to not dismiss global problems. Millions of children all around the world are hit the hardest by poverty and exploitation, war and flight, hunger and the lack of educational opportunities. The same is true for the effects of climate change that can already be felt”, said Peter-Matthias Gaede, vice chairman of UNICEF Germany.

“In this special year of the 20th anniversary of our photo competition, more than 90 top-quality photo series from all around the world were entered. The photographers’ wide variety of narrative styles in portraying the lives of children and childhood in general in an artistic, journalistic and documentary way, was simply stunning”, explained Jury Chairman, Prof. Klaus Honnef. “Their images tell stories in a way most texts rarely can.”

The winning picture: Garbage, the Children and Death

Photo 1: Wenie lives in the Philippines. Every day, she fishes plastic bottles out of the harbor’s polluted water in Manila’s Tondo district to sell them to garbage recyclers for a dime. Although child labor is officially prohibited, many girls and boys from the slums have no other choice. Children as young as seven paddle across the filthy water of the harbor on bamboo rafts or refrigerator doors. They risk their health and often their lives when searching the contaminated water for anything of value in order to secure their existence.

Photo 2:  The second prize of the international competition captures the horrible consequences of the war in Afghanistan. An entire family fell victim to the detonation of an unexploded bomb in their village. The family portrait shows the dignity of seven children who each lost one or more limbs. They also saw their mother and sister die. Last year alone, more than 1,400 civilians were injured or killed by mines and unexploded bombs in Afghanistan – almost 90% of them children. The photo was taken by Australian photographer Andrew Quilty, who lives in Afghanistan.

Photo 3:  Antonio Aragón Renuncio documented the hardships of Burkina Faso’s gold-seeking children – and followed them even to the cemeteries where so many of them now lie. All around the world, millions of girls and boys are exploited in mines, textile workshops, on farms, in private households and brothels. Renuncio, who already won the competition last year, documented one of the many fates like this. 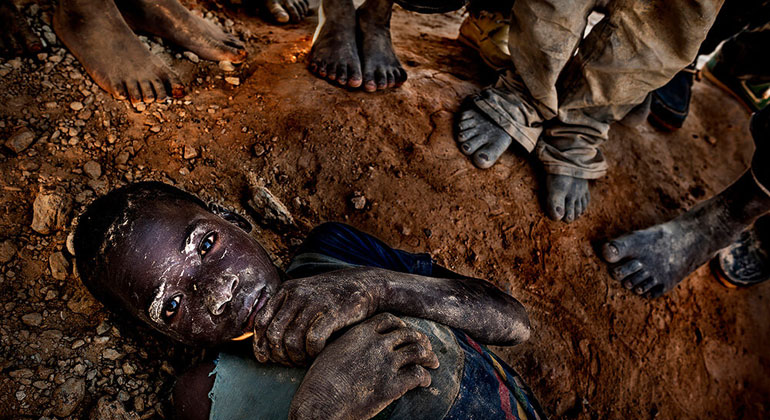