The chances of extreme hot summers across parts of Europe have increased dramatically since the early 2000s, according to a new study by the Met Office.

In 2004, the Met Office published a paper (Stott et al, 2003) which looked at the extreme European heatwave of 2003 and found that it had become more than twice as likely due to human influence on the climate. It was the first formal ‘attribution study’ of such an event.

The latest paper updates that study by looking at how the chances of hot weather in the same region, which covers parts of central and Mediterranean Europe, have changed in the intervening decade.

Since the first paper was published, summers in the affected region have warmed by 0.81 0C.

Dr Nikos Christidis, lead author of the new paper, said: “Extremely warm summers that would occur twice a century in the early 2000s are now expected to happen twice a decade.

“Moreover, the chances of heatwaves as extreme as seen in 2003 have increased from about 1-in-1000 to about 1-in100 years and are projected to occur once every other year by the 2030s-2040s under continuing greenhouse gas emissions.”

Heatwaves are expected to increase in frequency and intensity in a warming climate and the results of this study are consistent with this.

The sharp increase in the likelihood of regional summer heatwaves in the last 10-15 years reveals how temperature increases are quickly changing the chances of such events.

Dr Peter Stott, a co-author on the paper, said: “This paper shows how our vulnerability to heat extremes is rapidly changing and we expect that to continue going forward.

“Updated model projections of future changes suggest that by the end of the century summers as hot as 2003 will be considered unusually cool.”

Both the new and the old studies do not specifically cover the UK. Although the UK was less severely affected by the 2003 heatwave, summer extremes in the region are also expected to become more frequent in a warming climate.

The paper is published in Nature Climate Change.

Here is the text of a news release from Nature Climate Change about this research:

Europe is ten times more likely than it was earlier this century to have an extremely hot summer due to human-induced climate change, reports a paper published online in Nature Climate Change.

A previous study found that human activity had at least doubled the probability of a European summer heatwave, such as the one experienced in 2003. Using updated summer temperature observations and climate model results, Nikolaos Christidis and colleagues investigated how humans are influencing the probability of extreme heatwaves in Europe. The authors compared the decades 1990–1999 and 2003–2012 and found that very hot summers (where temperatures were 1.6 degrees Celsius higher the historical average temperature) are now likely to occur every five years, compared to every 52 years for the earlier period.

The 2003 heat wave was 2.3 degrees Celsius above the 1961–1990 average summer temperature. Christidis and colleagues show that changes in the last decade have increased the chances of a very hot summer with a temperature increase equivalent to the 2003 heatwave from less than one every thousand years to approximately one every 127 years.

As summer temperatures continue to increase, so will the likelihood of extremely hot summers. The 2003 heat wave resulted in a death toll of tens of thousands, therefore the authors advise that society act now to adapt to the predicted higher temperatures.

Abstract
Socio-economic stress from the unequivocal warming of the global climate system1 could be mostly felt by societies through weather and climate extremes2. The vulnerability of European citizens was made evident during the summer heatwave of 2003 (refs 3, 4) when the heat-related death toll ran into tens of thousands5. Human influence at least doubled the chances of the event according to the first formal event attribution study6, which also made the ominous forecast that severe heatwaves could become commonplace by the 2040s. Here we investigate how the likelihood of having another extremely hot summer in one of the worst affected parts of Europe has changed ten years after the original study was published, given an observed summer temperature increase of 0.81 K since then. Our analysis benefits from the availability of new observations and data from several new models. Using a previously employed temperature threshold to define extremely hot summers, we find that events that would occur twice a century in the early 2000s are now expected to occur twice a decade. For the more extreme threshold observed in 2003, the return time reduces from thousands of years in the late twentieth century to about a hundred years in little over a decade.

Citation
Dramatically increasing chance of extremely hot summers since the 2003 European heatwave by Nikolaos Christidis, Gareth S. Jones and Peter A. Stott published in Nature Climate Change (2014) doi:10.1038/nclimate2468
Read the abstract and get the paper here. 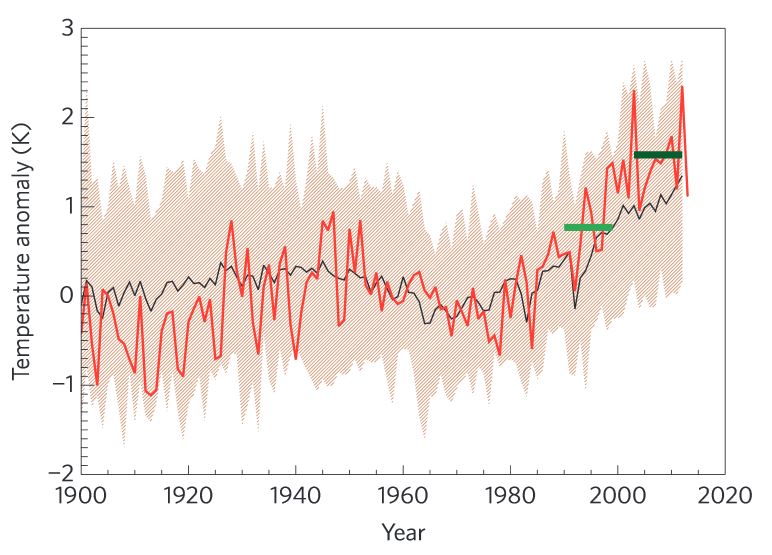 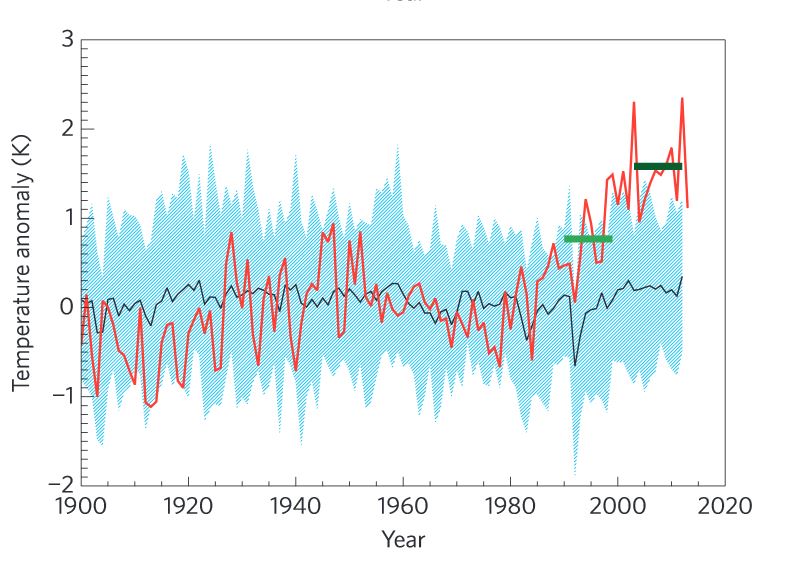