More than 2-3 billion people worldwide will move from the country to the cities within the next few decades, doubling the population of the world’s slums. It will be the biggest migration of our time. The power of this urbanization surge will be the key driver of global change in the 21st century.

This is revealed in the essence of the report ‘Humanity on the move – Unlocking the transformative power of cities’, which was presented today by the German Advisory Council on Global Change (Wissenschaftlicher Beirat der Bundesregierung Globale Umweltveränderungen, WBGU). Cities are responsible for a disproportionately high percentage of greenhouse-gas emissions – more than two thirds globally. At the same time, they are particularly hard hit by the consequences of global warming. Instead of ever greater densification, therefore, urban development should focus its attention more on the surrounding regions. Developing multiple medium-sized centres instead of a few rampantly expanding megacities increases humankind’s resistance to crises and takes the pressure off local resources such as water and land.

Berlin, 25 April 2016. “Urban growth is so immense that it must urgently be channelled in new directions,” said WBGU Co-Chair Dirk Messner, Director of the German Development Institute. If more and more new settlements were to be built with cement and steel in the cities of the developing countries and emerging economies, the energy-intensive production of this building material alone could release such huge quantities of greenhouse gases by 2050 that the world’s emissions budget of the 1.5°C target would already be virtually exhausted. Yet there are alternatives, e.g. building with wood or other natural materials. “Without decisive political action and international cooperation, humanity’s natural life-support systems would be jeopardized by the demand for resources and the CO2 emissions of urban construction,” said Messner.

Striving for sustainability in major cities and slums

The living conditions of city dwellers are also an issue here. There are already more than 850 million people today living in inadequate housing conditions. In sub-Saharan Africa, about two thirds of the urban population live in slums, in Asia around a third. Urbanization pressure is especially strong in Asia and Africa, where 90 percent of the global urban population growth is expected to take place. The current refugee movements show how difficult it is even for prosperous countries to cope with a rapid influx of people into their cities. By 2050, the number of people living in inadequate  housing could increase by 1?to 2 billion. “This is why the living conditions of people living in extreme poverty in particular must take centre stage in urban development,” said Messner. It is this fundamental change of perspective for the new urban agenda that the WBGU aims to initiate at the forthcoming Habitat III conference.

“A city like Hong Kong with its extreme densification is only viable because it sucks in oil, metals and food from the surrounding area and the whole world, digests it, and disposes of residues such as waste, effluent, exhaust gases into the surrounding countryside,” explained Hans Joachim Schellnhuber, WBGU Co-Chair and Director of the Potsdam Institute for Climate Impact Research. “The distributed nature of renewable-energy generation, the circular economy and even the digital economy makes disaggregation possible – and to some extent even requires it. Polycentric integration in regions such as the German Ruhr area, which is currently re-inventing itself, or the San Francisco Bay Area can be models for the urbanity of the future.”

In contrast to the great importance of urbanization for the transformation towards sustainability, the corresponding international institutions are only weakly positioned.

In order to intensify the global debate on urbanization and transformation, the G20 should take up the subject on a permanent basis. Germany’s federal government has a key role to play here, since it will be assuming the G20 Presidency in 2017. It should put the topic on the agenda.

The United Nations Human Settlements Programme (UN-Habitat) should be reformed and strengthened, so that its influence and efficacy are at least on a par with such programmes as UNEP.

Regular scientific progress reports would help promote an awareness of urbanization among the international community and clarify the actions that are needed for the transformation towards sustainability. There could be a committee similar to the Intergovernmental Panel on Climate Change (IPCC) that could conduct an integrated assessment of the scientific status quo on global urbanization dynamics.

Humanity on the move: The transformative power of cities

The momentum of urbanization and its impacts are so massive that we must face up to this trend. In view of the existing cognitive, technical, economic and institutional path dependencies, a policy of business as usual – i.e. an unstructured, quasi-automatic urbanization – would lead to a non-sustainable ‘world cities society’. Only if cities and urban societies are sufficiently empowered can they make use of the opportunities for sustainability and successfully follow the urban transformation pathways. The success or failure of the Great Transformation will be decided in the cities. The WBGU discusses the relevant conditions for the success of this transformation in this report. 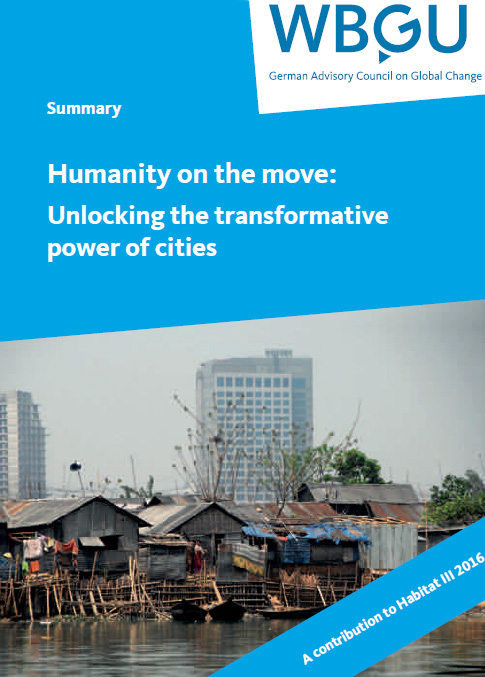