Almost three quarters of habitable land on earth are under human use – resulting in substantial impacts on our climate, a new report of the Intergovernmental Panel on Climate Change (IPCC) shows.

Today, almost a quarter of human-made greenhouse gas emissions arise from agriculture, forestry and other land use. The latest IPCC Special Report investigates the current situation, possible future scenarios and potential solutions on how we can use land to feed ourselves, fuel economic growth and limit climate change risks. Two Potsdam scientists figure as lead authors of the chapter on food security and on the relations between land and climate.

More than 60 scientists from all over the world have gathered in Geneva to finalise the new IPCC Special Report on Climate Change, Desertification, Land Degradation, Sustainable Land Management, Food Security, and Greenhouse gas fluxes in Terrestrial Ecosystems, as the full title reads. Two of them are researchers at the Potsdam Institute for Climate Impact Research: Alexander Popp is a lead author of the chapter on climate land interactions, and Prajal Pradhan as a lead author of the chapter on food security.

Reducing emissions is also an issue of land use. The land sectors makes for 22 per cent of all man made greenhouse gas emissions, with land sector meaning agriculture, forestry, and other land use. Agriculture alone accounts for roughly 50 per cent of global methane emissions, a greenhouse gas that is less plentiful yet per unit more powerful than CO2, with cattle and rice farming as the main sources.

“The report touches on many aspects of human life on land that are fundamentally entangled: What we eat influences what we grow or raise, which in turn influences how we use our land,” Alexander Popp, head of the land use management group at PIK, explains. Land can contribute strongly to climate change mitigation often with beneficial effects for sustainable development. However, the global land system is already today under high pressure. In certain areas, land-demanding mitigation measures such as afforestation or bioenergy might compete with food production. “You don’t want to harm more than you solve. This means that any such measure adopted to tackle climate change on land need to be very well balanced. They must take into account the local situation of both land and livelihoods of the people involved. Now that might sound quite complicated, but in fact, the first rule is very plain: Stop burning fossil fuels. That’s the most straightforward way to protect our lands,” Popp concludes.

Yet there are further significant factors contributing to climate change in the food system, i.e. the entire agricultural production, including its energy needs for processing and transportation of food. Prajal Pradhan, agro-ecologist at PIK: “To get the full picture, we need to look beyond the farm gate and include the food system: Adding up our food’s emissions from plant to plate propels the contribution from the food system to almost one third of global greenhouse gas emissions.” Currently, 25-30 per cent of all food produced is lost to waste. At the same time, diets are changing: Since 1961, global meat consumption has more than doubled. In addition, as overall food supply rose, the number of people overweight has doubled since 1975. Today, more than 800 million people are undernourished, and 2 billion adults worldwide are overweight. “In the report, we argue for three ways to mitigate climate change: Cut emissions, remove CO2 from the atmosphere, e.g. through afforestation or soil carbon sequestration, and, very importantly, change dietary habits and reducing food waste,” Pradhan explains.

Another relevant factor the report points out is the shifting of vegetation zones due to climate change. Agro-Economist Hermann Lotze-Campen, head of the research department on climate resilience at PIK and farmer by training, says, “Shifting temperatures will affect yields. While certain crops will no longer flourish in certain areas, other regions might benefit. This is why it is so important to tailor every measure of adaptation or mitigation very specifically to the respective region. But it also proves another grim truth from the report: The people most vulnerable to climate change on land are those who live in precarious conditions already today.”

Johan Rockström, director of PIK, comments: “The IPCC Report on Land confirms that we are facing a planetary emergency, that the window for taking decisive action is closing fast and that the costs of inaction will be catastrophic. While the report paints a bleak picture of what could come to pass, it also points a way forward, including opportunities for immediate action.” He further stresses, “The action taken over the next decade – which must be led by governments – will determine whether or not we are able to emerge from this emergency by transforming our global economy to better balance our climate response, biodiversity and development.” 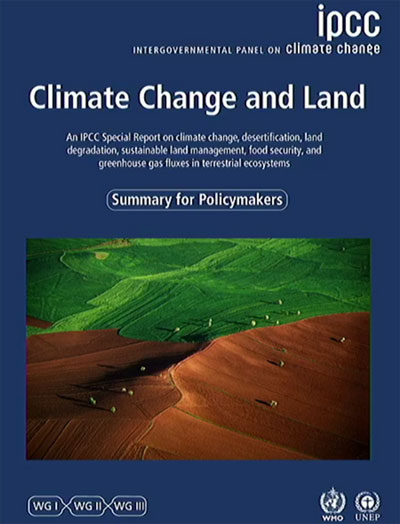