Humanity’s 21st century challenge is to meet the needs of all within the means of the planet.

In other words, to ensure that no one falls short on life’s essentials (from food and housing to healthcare and political voice), while ensuring that collectively we do not overshoot our pressure on Earth’s life-supporting systems, on which we fundamentally depend – such as a stable climate, fertile soils, and a protective ozone layer. The Doughnut of social and planetary boundaries is a playfully serious approach to framing that challenge, and it acts as a compass for human progress this century.

The Doughnut of social and planetary boundaries (2017)

The environmental ceiling consists of nine planetary boundaries, as set out by Rockstrom et al, beyond which lie unacceptable environmental degradation and potential tipping points in Earth systems. The twelve dimensions of the social foundation are derived from internationally agreed minimum social standards, as identified by the world’s governments in the Sustainable Development Goals in 2015. Between social and planetary boundaries lies an environmentally safe and socially just space in which humanity can thrive.

Here’s a one-minute introduction to the Doughnut, by the brilliant animator Jonny Lawrence.

And here’s a commentary published in The Lancet Planetary Health, May 2017.

Since the first iteration of the Doughnut was published as a discussion paper by Oxfam in 2012, it has had traction in very diverse places – from the UN General Assembly and the Global Green Growth Forum, to Occupy London.  Why such interest? I think it is because the doughnut is based on the powerful framework of planetary boundaries but adds to it the demands of social justice – and so brings social and environmental concerns together in one single image and approach. It also sets a vision for an equitable and sustainable future, but is silent on the possible pathways for getting there, and so the doughnut acts as a convening space for debating alternative pathways forward.

Commentaries on the first doughnut of 2012

George Monbiot in The Guardian argues that the doughnut highlights the importance of addressing environmental sustainability and social justice together.

Grist writer David Roberts sees the doughnut as a new way to think about economic growth (and wants the T shirt).

Tony Juniper argues that the doughnut helps to forge a way beyond contemporary capitalism.

Will Steffen and Mark Stafford Smith, two leading Earth scientists, reflect on how the doughnut can help to generate a set of Sustainable Development Goals.

Eduardo Gudynas, a Latin American environmentalist, asks whether the doughnut is too Western.

Wolff Olins, the brand consultants, challenge companies to ask themselves, “Is our brand a doughnut?”

I have the written about and presented the doughnut and its implications to a wide range of audiences, in the context of many different debates. Some of these include:

Nature Climate Change interview on the implications of the doughnut

Guardian podcast on planetary and social boundaries with Johan Rockstrom, Kate Raworth and Gail Whiteman of the World Business Council for Sustainable Development.

My research is focused on exploring what planetary and social boundaries imply for rethinking the concept of economic development. Is it growth or post-growth? How should we measure economic progress? How should we rewrite the economics textbooks so they are fit for tackling 21st century challenges? Join the discussion by subscribing to my blog at www.doughnuteconomics.org. 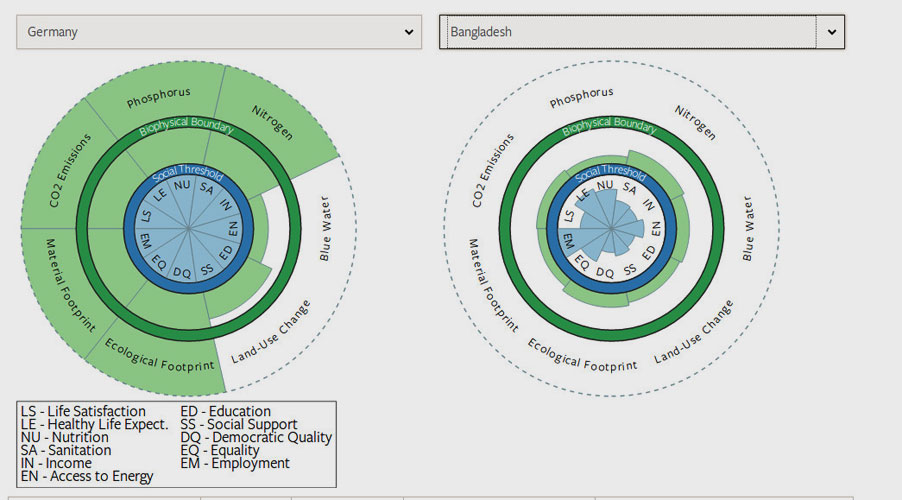