Documents the discrepancy between type-approval and real-world NOx emissions from new diesel passenger cars. On average, on-road NOx emissions from the vehicles tested for this analysis were about seven times higher than the limits set by the Euro 6 standard.

This study, a meta-analysis of PEMS data from EU (Euro 6) and US (Tier 2 Bin 5/ULEV II) diesel passenger cars, documents the wide discrepancy that exists between official certification or type-approval emissions of nitrogen oxides (NOx) from new diesel passenger cars and actual NOX emissions from those vehicles during real-world, everyday operation.

The study comes on the heels of a recent report showing that a similar gap between official and real-world emissions of CO2 from passenger cars in Europe widened to 38% in 2013—i.e., CO2 emissions (and fuel consumption) during everyday operation were on average more than a third higher than the certification values obtained for vehicles via laboratory type-approval test.

Standards regulating NOx and other exhaust emissions from passenger cars in the EU have become more stringent over time: The permissible limit for emissions of nitrogen oxides (NOx) from diesel cars declined from 500 milligrams per kilometer (mg/km) under Euro 3 (effective January 2000) to 80 mg/km under Euro 6 (effective September 2014). New passenger vehicles are certified as meeting the standards on the basis of test results obtained under laboratory conditions. But studies have suggested that on-road performance does not dependably reflect these “type-approval” results.

Emissions were measured over 97 trips, totaling more than 140 hours of operation and 6,400 kilometers driven. The high temporal and spatial resolution of PEMS datasets permitted the analysis to link elevated NOx mass emission rates to the driving conditions that caused them.

Highlights of the results

On average, real-world NOx emissions from the tested vehicles were about seven times higher than the limits set by the Euro 6 standard. If applied to the entire new vehicle fleet, this would correspond to an on-road level of about 560 mg/km of NOx (compared to the regulatory limit under Euro 6 of 80 mg/km). This is compelling evidence of a real-world NOx compliance issue for recent-technology diesel passenger cars, for both the EU and US test vehicles.

In most cases the exceedances found could not be attributed to “extreme” or “untypical” driving. Instead, they were due to transient increases in engine load typical of everyday driving (e.g., going up a slight incline), or to normal regeneration events in the normal diesel exhaust aftertreatment systems.

Performance differences among the vehicles tested indicate that the technologies for real-world clean diesels already exist. Some of the tested vehicles had average emissions below Euro 6 emission limits, suggesting that the technologies to achieve that level of performance are available, but that policies are not yet in place that can force manufacturers use these technologies and calibrate them to effectively control emissions over the majority of in-use operating conditions, not just those covered by the test cycle.

The European Commission’s Real Driving Emissions (RDE) working group is preparing for the introduction of on-road PEMS testing as part of the passenger-car type-approval process in the EU. The results of this study strongly support this approach to improving type-approval testing for new passenger vehicles. 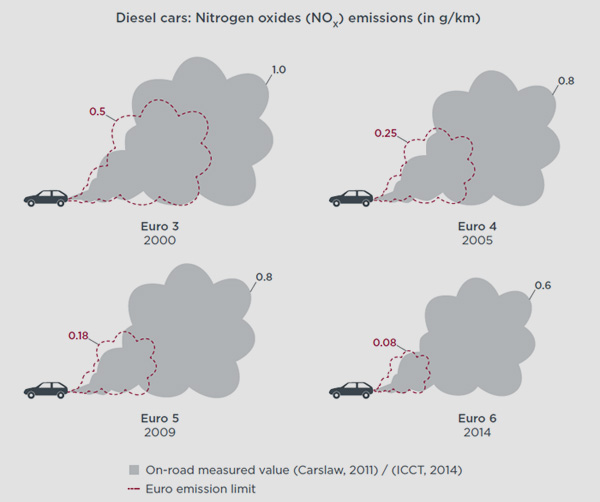