Stanford scientists have developed a way to wirelessly deliver electricity to moving objects, technology that could one day charge electric vehicles and personal devices like medical implants and cell phones.

If electric cars could recharge while driving down a highway, it would virtually eliminate concerns about their range and lower their cost, perhaps making electricity the standard fuel for vehicles.

Now Stanford University scientists have overcome a major hurdle to such a future by wirelessly transmitting electricity to a nearby moving object. Their results are published in the June 15 edition of Nature.

“In addition to advancing the wireless charging of vehicles and personal devices like cellphones, our new technology may untether robotics in manufacturing, which also are on the move,” said Shanhui Fan, a professor of electrical engineering and senior author of the study. “We still need to significantly increase the amount of electricity being transferred to charge electric cars, but we may not need to push the distance too much more.”

The group built on existing technology developed in 2007 at MIT for transmitting electricity wirelessly over a distance of a few feet to a stationary object. In the new work, the team transmitted electricity wirelessly to a moving LED lightbulb. That demonstration only involved a 1-milliwatt charge, whereas electric cars often require tens of kilowatts to operate. The team is now working on greatly increasing the amount of electricity that can be transferred, and tweaking the system to extend the transfer distance and improve efficiency.

Wireless charging would address a major drawback of plug-in electric cars – their limited driving range. Tesla Motors expects its upcoming Model 3 to go more than 200 miles on a single charge and the Chevy Bolt, which is already on the market, has an advertised range of 238 miles. But electric vehicle batteries generally take several hours to fully recharge. A charge-as-you-drive system would overcome these limitations.

“In theory, one could drive for an unlimited amount of time without having to stop to recharge,” Fan explained. “The hope is that you’ll be able to charge your electric car while you’re driving down the highway. A coil in the bottom of the vehicle could receive electricity from a series of coils connected to an electric current embedded in the road.”

Some transportation experts envision an automated highway system where driverless electric vehicles are wirelessly charged by solar power or other renewable energy sources. The goal would be to reduce accidents and dramatically improve the flow of traffic while lowering greenhouse gas emissions.

Wireless technology could also assist GPS navigation of driverless cars. GPS is accurate up to about 35 feet. For safety, autonomous cars need to be in the center of the lane where the transmitter coils would be embedded, providing very precise positioning for GPS satellites.

Mid-range wireless power transfer, as developed at Stanford and other research universities, is based on magnetic resonance coupling. Just as major power plants generate alternating currents by rotating coils of wire between magnets, electricity moving through wires creates an oscillating magnetic field. This field also causes electrons in a nearby coil of wires to oscillate, thereby transferring power wirelessly. The transfer efficiency is further enhanced if both coils are tuned to the same magnetic resonance frequency and are positioned at the correct angle.

However, the continuous flow of electricity can only be maintained if some aspects of the circuits, such as the frequency, are manually tuned as the object moves. So, either the energy transmitting coil and receiver coil must remain nearly stationary, or the device must be tuned automatically and continuously – a significantly complex process.

To address the challenge, the Stanford team eliminated the radio-frequency source in the transmitter and replaced it with a commercially available voltage amplifier and feedback resistor. This system automatically figures out the right frequency for different distances without the need for human interference.

“Adding the amplifier and resistor allows power to be very efficiently transferred across most of the three-foot range and despite the changing orientation of the receiving coil,” said graduate student Sid Assawaworrarit, the study’s lead author. “This eliminates the need for automatic and continuous tuning of any aspect of the circuits.”

Assawaworrarit tested the approach by placing an LED bulb on the receiving coil. In a conventional setup without active tuning, LED brightness would diminish with distance. In the new setup, the brightness remained constant as the receiver moved away from the source by a distance of about three feet. Fan’s team recently filed a patent application for the latest advance.

The group used an off-the-shelf, general-purpose amplifier with a relatively low efficiency of about 10 percent. They say custom-made amplifiers can improve that efficiency to more than 90 percent.

“We can rethink how to deliver electricity not only to our cars, but to smaller devices on or in our bodies,” Fan said. “For anything that could benefit from dynamic, wireless charging, this is potentially very important.”

The study was also co-authored by former Stanford research associate Xiaofang Yu. Part of the work was supported by the TomKat Center for Sustainable Energy at Stanford. 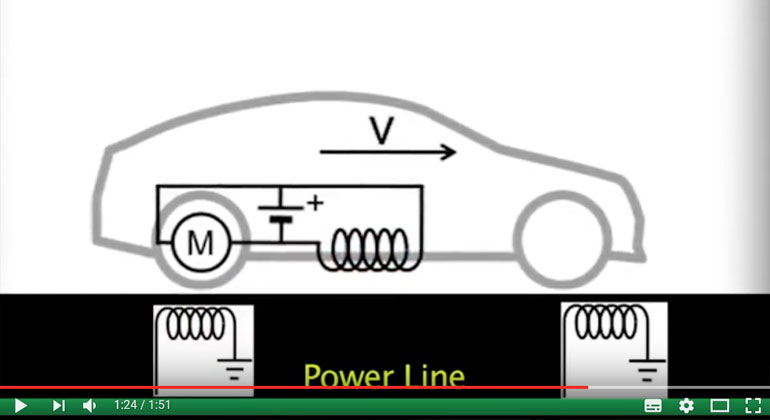