After the Great War, it is nothing but a miracle the way people of Germany build such strong economic structure merely out of the after war ashes. It has always been a fascinating topic for me to understand the success secrets of Germany. By Mohammed Imran Khan

However, my curiosities lead me to study current and historical developments that have occurred over the years in the social, economic and integration of immigrants in Germany. As I said earlier the German economic growth is nothing but a miracle, but this miracle was definitely not possible without people working together, including both: Germans and immigrants. The concept of “Gastarbeiter” can be a good example of it. Now whatever the history has to offer from the past of Germany, the current economic and social contribution puts this land above the other so-called economic superpowers in the world. Accommodating thousands of Syrian refugees can also be mentioned as a great example. Now considering the example of “Gastarbeiter” and current humanitarian contribution of Germany to the victimized people of Syria definitely brings few complex questions to me like: What are the factors that influence communication between Germans and immigrants? And how do these factors affect each other? Here I would like to define immigrants as a whole, especially those who visit Germany on a temporary or permanent basis and this includes students, political asylums, refugees, foreign investors, foreign tourists etc. Now considering the questions in hand, I would like to introduce and explain “The Montage Effect”.

Defining “The Montage Effect”:
I was first introduced with the German word “Montage” in 2015 when I worked with a company in Ingolstadt for my “Ferienjob”. The German word “Montage” can be translated into assembly or installation. In the factory, Montage is a production unit where different parts of a car come together to be assembled and installed to complete a car or parts of a car. However, I observed very closely how it is done and assembled in a mechanical term. On the other hand, I have also observed people from different parts of the world working together in the same production unit at the “Montage” but always stay together with their own groups or countryman. For example, Germans always sit together with Germans, Turkish with Turkish, Kazaks with Kazaks and me with every of these groups at different days. Then one day I asked myself  since we all work under the same roof assembling different parts of a soulless car but detaching our soulful self’s from each other by not sitting together, is it because of colour, race or religion? And why we do not share our small thoughts or small talks? I am not saying that they don’t talk to each other at all, they do, but sometimes some interesting and detaching words come to be heard like “Kartoffel” or “Döner” (sometimes during the lunch time in the production unit I have seen people make fun out of German colleagues asking “Was isst du? Wie als immer Kartoffel oder?” And in response they say “Ich verkaufe kein Döner und ich kann nicht jeden Tag Döner essen.” This thing occurred few times and I have seen it was not so friendly and I believe this makes people go away from each other. They all work and live together in the same land, then why using those words and why the simple friendly atmosphere at work is missing? By sitting together with these two, three or more parallel worlds, I had this curiosity to understand the exact factors behind such miscommunicating behaviour amongst these groups of people.

As a result, I named this effect as “The Montage Effect”, the effect that occurs amongst these groups of people when they are assembled together. Now let’s see how it works.

Factors Analysis:
From Fredmund Malik’s point of view, viability (sustainability) is the ability to maintain the capacity to function over an unlimited period. It means when a resource has been used up, a system must be able to switch to another resource. From my point of view, an economy does not only consist of money, it requires human resources to obtain results and maintain progress for now on and for the future too. In this case, human involvement in every level is inevitable and irreplaceable.

To maintain the current German economic stability, I believe it is very important to establish a friendly and understanding atmosphere in every part of this society and this has to be done from both sides: Germans and immigrants. For a better understanding the following table shows the actors that result in misunderstanding and miscommunication.

The factors mentioned above create some sort of shock and misleading questions. Why is it misleading? Well, the factors mentioned above cannot be denied, because I believe that small misconceptions can bring bigger problems in the future. Like a small cancer cell in the body. Its better the small cancer cell should be removed before it grows big and lead us to die. When older people cannot judge, explain or understand each other with empathy and pass their corrupted understanding to their children’s too, then I am afraid the future holds destruction and imbalanced social condition for this great country. That’s why making aware of the above mentioned factors to everybody is very important before it’s too late and misleads all the people. . For this reason both, Germans and immigrants, face interaction problems and cannot communicate spontaneously with each other. That’s why both create their own groups and stay together with people from their own country. Eventually it turns into a normal habit for them and this leads to even less understanding, as there is almost no communication and exchange between Germans and immigrants.

Purpose of the Analysis:
The objective of the analysis above is to improve the communication efficiency between Germans and foreigners without stereotyping each other. However, it is also to give mutual understanding and empathy when it comes to deal with each other focusing any specific work. I believe it is very significant for a well-organized, civilized and sympathising society like Germany.

Causes and Problems:
The main problem of this miscommunicating behaviour causes less efficiency in terms of obtaining maximum output from any specific task, job or project. I am not saying that it is affecting the German economy so bad that the economy is going down. It’s something like a cancer cell, better to be removed when it is still small.  This miscommunication should be removed before it grows and affect the future when it might be impossible to control it anymore. This can be done by educating and creating events where people share their views with each other apart from work.

Since we are all social beings, it is impossible for us to live in a society hating each other forever due to a lack of transparency about the others culture etc. Though people are already doing this for example, some people I know live in Germany for a long time already, but still cannot speak communicative German. When I asked them about the reason for it, most of them said that they neither care about Germans nor their language and this was a shock to me. I believe my Montage effect will contribute to create transparency and unification between Germans and immigrants by giving mutual understanding and bring more friendliness and improve living together.

Solution:
To find a proper solution, it is very important to understand and comprehend The Montage effect itself. Human beings are the end product of their society, religion, culture and traditions. There are approximately 196 countries in the world; each one is different and unique. I would like to propose this exceptional task to all the people who will read my article and who want to create a sustainable, equal and effective society to come forward and contribute their extraordinary ideas together to find the mutual solution. I strongly believe this will also bring all of us together independent of races, colours and religions. Who is ready to do this? Please send me your valuable views and suggestions for further analysis to my personal email imran_02khan@yahoo.com. 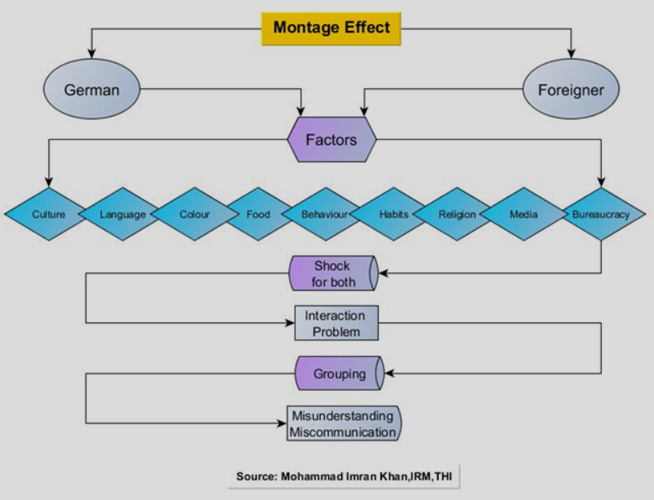