Global energy-related carbon dioxide (CO2) emissions can be reduced by 70% by 2050 and completely phased-out by 2060 with a net positive economic outlook, according to new findings released today by the International Renewable Energy Agency (IRENA). Perspectives for the Energy Transition: Investment Needs for a Low-Carbon Energy Transition, launched on the occasion of the Berlin Energy Transition Dialogue, presents the case that increased deployment of renewable energy and energy efficiency in G20 countries and globally can achieve the emissions reductions needed to keep global temperature rise to no more than two-degrees Celsius, avoiding the most severe impacts of climate change.

“The Paris Agreement reflected an unprecedented international determination to act on climate. The focus must be on the decarbonision of the global energy system as it accounts for almost two-thirds of greenhouse gas emissions,” said IRENA Director-General Adnan Z. Amin. “Critically, the economic case for the energy transition has never been stronger. Today around the world, new renewable power plants are being built that will generate electricity for less cost than fossil-fuel power plants. And through 2050, the decarbonisation can fuel sustainable economic growth and create more new jobs in renewables.

“We are in a good position to transform the global energy system but success will depend on urgent action, as delays will raise the costs of decarbonisation,” added Mr. Amin.

While overall the energy investment needed for decarbonising the energy sector is substantial – an additional USD 29 trillion until 2050 – it amounts to a small share (0.4%) of global GDP. Furthermore, IRENA’s macroeconomic analysis suggests that such investment creates a stimulus that, together with other pro-growth policies, will:

Globally, 32 gigatonnes (Gt) of energy-related CO2 were emitted in 2015. The report states that emissions will need to fall continuously to 9.5 Gt by 2050 to limit warming to no more than two degrees above pre-industrial temperatures. 90% of this energy CO2 emission reduction can be achieved through expanding renewable energy deployment and improving energy efficiency.

The report also describes how the energy sector transition needs to go beyond the power sector into all end-use sectors. Renewables need to account for the majority of power generation in 2050, based on continued rapid growth especially for solar and wind power in combination with enabling grids and new operating practices. But also, the buildings, industry and transport sectors need more bioenergy, solar heating and electricity from renewable sources that substitute conventional energy. Electric vehicles need to become the predominant car type in 2050. Liquid biofuel production must grow ten-fold. High efficiency all-electric buildings should become the norm. Deployment of heat pumps must accelerate and a combined total of 2 billion buildings will need to be new built or renovated.

The report calls for policy efforts to create an enabling framework and re-design of energy markets. Stronger price signals and carbon pricing can help provide a level playing field when complemented by other measures, and the report emphasizes the importance of considering needs of those without energy access. 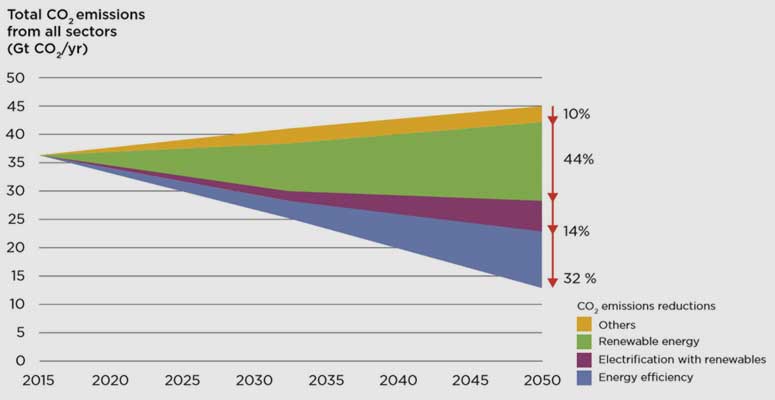