In its new report, IHS analysis details how the petition poses “a severe threat” to the deployment of US solar until 2021. Now-bankrupt firm Suniva petitioned the US government to impose a minimum import price (MIP) of 78 cents, after it blamed its insolvency on overcapacity and increased module competition from Asia.

If the White House were to fully implement the measures outlined in Suniva’s petition, IHS estimates that PV demand in the country would shrink by 60% compared to its current forecast between 2018-2021, as the market would be constrained by the relatively small amount of manufacturing.

Further, the number of economically attractive state markets for utility-scale PV using c-Si modules in 2018 would likely fall from 43 to just 32 markets. “This would effectively take the market back to attractiveness levels seen in 2015 and 2016,” the report states.

The ramifications extend far outside the US domestic market, as a slump in the US could further escalate the oversupply climate. “Further price declines could accelerate demand in other price sensitive PV markets, or potentially open up emerging markets, however this additional demand could only partially offset the reduction of demand in the US projected slump in the US also could impact future PV policy in China, as the government would seek to protect its industry.”

In addition, IHS forecasts that the measures outlined in the petition – which include the floor price would falling to 72 cents in the second year, 69 cents in year three and 68 cents in year four – could “significantly reduce the labour force employed in the development, construction and operations of PV systems”, in exchange for the promise of more domestic manufacturing jobs.

However, IHS says that irrespective of the outcome of Suniva’s trade complaint, the case has the potential to obscure the outlook for domestic module prices; preventing suppliers from providing future price guarantees to clients. This also extends to non-US manufacturers of c-Si cells.

Thin-film specialists like First Solar may benefit from the implementation however, as their technology falls outside the scope of the trade measure. It could cause significant uptake in thin-film technology, and coupled with the lack of competition, such suppliers are posed to capture more margin. 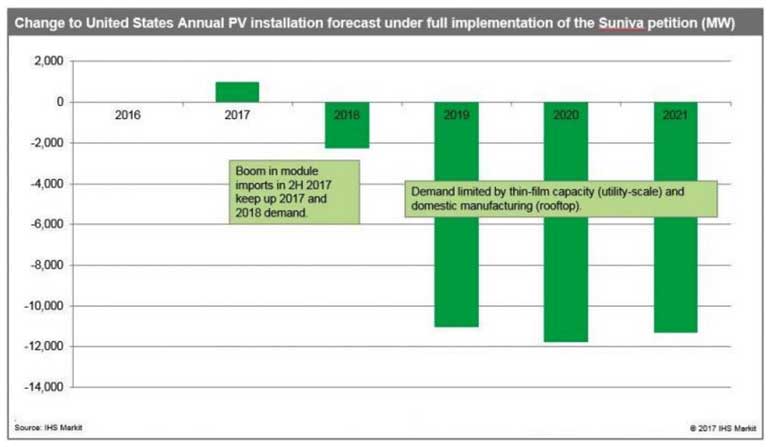