Implementation of UN Agreements for climate protection and sustainability must be core responsibility of G20 – with or without Trump.

A few days before the G20 summit in Hamburg, an international network of foundations calls upon German chancellor Angela Merkel to make climate protection and sustainable development a core responsibility of G20. If necessary, this must be enforced without the agreement of US president Trump.

“The Paris Agreement and the UN Sustainable Development Goals have ushered in a new era of international cooperation and understanding. G20 must take responsibility and set the course towards implementing the UN Agreement for climate protection and sustainable development”, says Michael Dittrich, head of finance and administration at the German Federal Environmental Foundation (DBU) on behalf of the Foundations Platform F20, which represents more than 45 international foundations from 12 countries. “Scientific research has proven that global prosperity is possible while respecting the earth’s resource limitations. It is important, that we seize this opportunity”, Dittrich says.

In their statement, the F20 Platform refers to a brand-new report that has been developed in partnership with the French think tank IDDRI. The report outlines the progress of the worldwide energy transition. The report was first launched today at a press conference in Hamburg.

“The global energy transition is being accelerated by an exciting mix of innovation, climate policy and societal pressure”, says Laurence Tubiana, CEO of the European Climate Foundation (ECF). “Citizens are demanding clean air, business people are recognizing the business potential of climate action and politicians see the transition is feasible thanks to dramatic falls in the costs of renewable energy.”

According to the report, climate action must be accelerated, especially on a national level, in order to limit global warming to well below 2°C. “The domestic commitments to climate protection are still insufficient to reach the goals of the Paris Agreement”, says Dr. Lars Grotewold, Director Centre for Climate Change at Stiftung Mercator. As the host of the G20 Germany, must embrace this challenge: “Germany should be ambitious, and demonstrate with a successful energy transition that the transformation to a climate-friendly and sustainable economy is feasible.”

Dr. Michael Otto, businessman, chairman of the Michael Otto Foundation for Environmental Protection and initiator of the Berlin based Stiftung 2 Grad, emphasized the social and economic opportunities that arise as co-benefits of climate protection: “195 countries have committed to zero emissions by the end of the century. Whoever is developing the necessary technologies, products and services for this process is at the front line of international competition,” says Otto stating that it would be risky from a business point of view to be left behind in this development.

Regarding the USA, Otto added: “President Trump may reject the Paris Agreement, but he cannot stop the economic momentum behind climate action.”

Alongside with stakeholders from think tanks, business, civil society and trade unions from all over the world, the F20 Platform called upon G20 heads of state to confirm their commitment to climate action and urged them to implement the Paris Agreement as soon as possible.

place this Friday 7th and Saturday 8th July. The F20 aims at bridging the gap between the 20 most important industrial countries and emerging economies (G20), the private and financial sector as well as civil society. In total, the foundations represent a capital in the double-digit billion range (US dollars).

Other quotes from F20 members 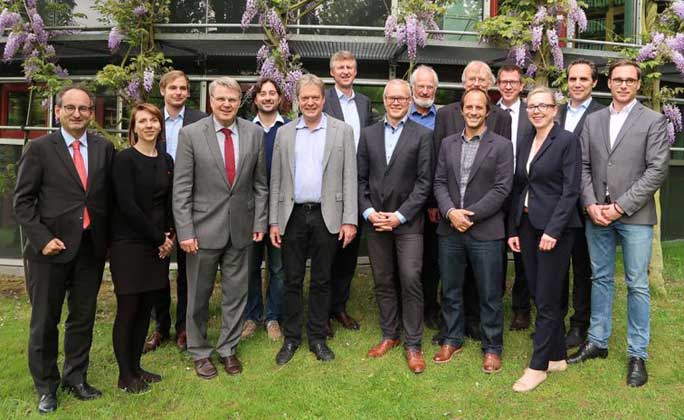