Countries around the world are upping the share of renewables in their energy mixes. The bad news is, they’re not doing it quickly enough to meet the Paris Agreement goal, to hold the global average temperature increase to “well below” 2°C above preindustrial levels, and as close as possible to 1.5°C.

Limiting global warming depends on a rapid transition from fossil fuels to more sustainable energy sources. Yet many countries continue to rely on coal-fired power to meet rising demand for energy.

Achieving a stable, sustainable and affordable global energy system will require a collaborative and systematic approach to solving problems and exploiting opportunities such as the new technologies of the Fourth Industrial Revolution, according to the latest edition of the World Economic Forum’s Fostering Effective Energy Transition report.

The report contains the Energy Transition Index (ETI), which compares the energy sectors of 115 countries and analyses their readiness for energy transition.

It does this by benchmarking countries’ energy systems based on an “energy triangle”, comprised of energy security and access, economic development and growth, environmental sustainability and how well they are set-up to succeed in the future.

There’s little change from last year at the top of the table, with Western and Northern European countries continuing to dominate. Sweden retains first spot, followed by Switzerland, Norway and Finland.

The report says despite the diversity of the top performing nations in their primary energy mix, systems and resources, they all share certain characteristics, demonstrating a combination of technical advances and effective policy-making and implementation.

Countries with high ETI scores also performed well on their readiness for energy transition, with Finland topping that list, followed by Denmark, and Austria in third.

By contrast, countries at the bottom of the ranking often lack effective regulatory frameworks and suffer from political instability. Ongoing geopolitical conflicts or dependency on legacy fossil-fuel based power generation infrastructure restrict opportunities to develop the conditions for energy transition, the report says.

Fossil fuel exporters, such as Nigeria, Mozambique and Venezuela, face major barriers to energy transition, as do countries with disproportionately high coal consumption, like South Africa and Mongolia.

Despite high contribution from the energy sector to economic development and growth due to large fossil fuel reserves, Nigeria ranks in the bottom 10% of countries in the report, with low overall system scores and a lack of enabling infrastructure.

The report highlights the scale of the challenge ahead. Overall the global energy transition has slowed with year-on-year increases in global average ETI scores at their lowest for five years – here’s the breakdown:

The report outlines a seven-step roadmap for countries to overcome the barriers to energy transition. These include identifying influential energy sector champions, establishing an operational structure to drive collaboration and defining specific milestones and action plans.

The hope is that by encouraging nations, supported by other global stakeholders, to follow these steps, the world will come closer to building an energy system based on sustainability, security, affordability and inclusiveness. 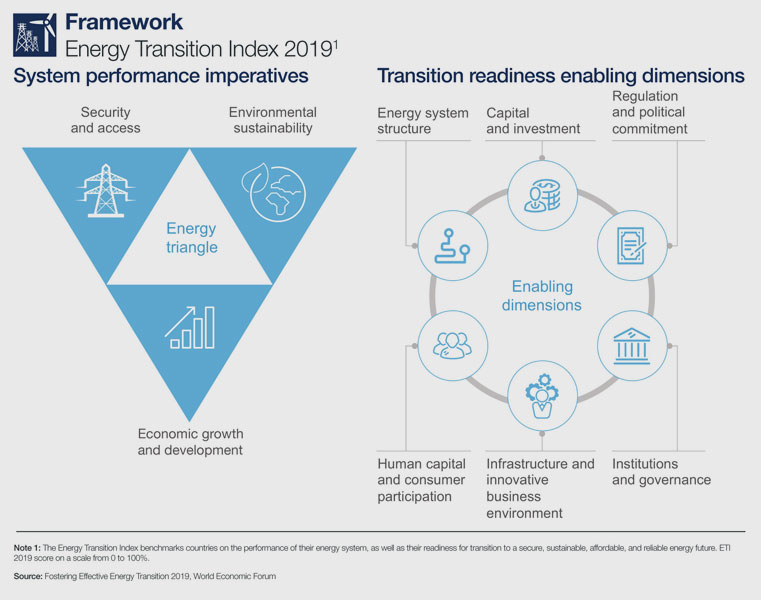