War, violence and persecution worldwide are causing more people than ever to be forcibly displaced, according to a report published today by UNHCR, the UN Refugee Agency.

UNHCR’s new Global Trends report, the organization’s major annual survey of the state of displacement, says that at the end of 2016 there were 65.6 million people forcibly displaced worldwide – some 300,000 more than a year earlier. This total represents an enormous number of people needing protection worldwide.

The figure of 65.6 million comprises three important components. First is refugee numbers, which at 22.5 million are the highest ever seen. Of these, 17.2 million come under the responsibility of UNHCR, and the remainder are Palestinian refugees registered with our sister-organization UNRWA. Syria’s conflict remains the world’s biggest producer of refugees (5.5 million), however in 2016 the biggest new factor was South Sudan where the disastrous breakdown of peace efforts in July of that year contributed to the outflow of 739,900 people by year’s end (1.87 million today).

Third is asylum seekers, people who have fled their country and are seeking international protection as refugees. As of the end of 2016 the number of people seeking asylum globally was 2.8 million.

This adds up to an immense human cost of war and persecution globally: 65.6 million means that on average one in every 113 people worldwide is today someone who is displaced – a population bigger than that of the world’s 21st most populous country, the United Kingdom.

“By any measure this is an unacceptable number, and it speaks louder than ever to the need for solidarity and common purpose in preventing and resolving crises, and ensuring together that the world’s refugees, internally displaced and asylum seekers are properly protected and cared for while solutions are pursued,” said UN High Commissioner for Refugees Filippo Grandi. “We have to do better for these people. For a world in conflict, what is needed is determination and courage, not fear.”

Among the report’s key findings, is that new displacement in particular remains very high. Of the 65.6 million people forcibly displaced globally, 10.3 million became displaced in 2016, about two-thirds of them (6.9 million) fleeing within their own countries. This equates to one person becoming displaced every 3 seconds – less than the time it takes to read this sentence.

At the same time, returns of refugees and internally displaced people to their homes, combined with other solutions such as resettlement in third countries meant that for some, 2016 brought the prospect of improvement. Some 37 countries together accepted 189,300 refugees for resettlement. Around half a million other refugees were able to return to their home countries, and about 6.5 million internally displaced people to their areas of origin – although many did so in less than ideal circumstances and facing uncertain prospects.

Worldwide, most refugees – 84 per cent – were in low- or middle-income countries as of end 2016, with one in every three (4.9 million people) being hosted by the least developed countries. This huge imbalance reflects several things including the continuing lack of consensus internationally when it comes to refugee hosting and the proximity of many poor countries to regions of conflict. It also illustrates the need for countries and communities supporting refugees and other displaced people to be robustly resourced and supported – the absence of which can create instability, have consequences for life-saving humanitarian work, or lead to secondary displacement.

By population, Syria still accounts for the biggest numbers of displaced people overall, with 12 million people (almost two thirds of the population) either displaced internally or having fled abroad as refugees or asylum seekers. Leaving aside the long-standing Palestinian refugee situation, Colombians (7.7 million) and Afghans (4.7 million) remained the second and third biggest population, followed by Iraqis (4.2 million) and South Sudanese (the world’s fastest growing displaced population with 3.3 million having fled their homes by the end of the year).

Children, who make up half the world’s refugees, continue to bear a disproportionate burden of the suffering, mainly because of their greater vulnerability. Tragically, 75,000 asylum claims were received from children travelling alone or separated from their parents. The report says even this number is likely to underestimate the true figure.

UNHCR estimates that at least 10 million people were without a nationality or at risk of statelessness at the end of 2016. However, data recorded by governments and communicated to UNHCR were limited to 3.2 million stateless people in 75 countries.

Global Trends is a statistical assessment of forced displacement, and as such a number of key developments in the refugee world in 2016 are not captured. These include increased politicization of asylum issues in many countries, and growing restrictions on access to protection measures in some regions, but also positive developments such as the historic summits on Refugees and Migrants in September 2016, the landmark New York Declaration that followed, the new all-of-society approach to managing displacement being pioneered under the Comprehensive Refugee Response Framework, and the enormous generosity of host countries and donor governments alike towards refugees and other displaced populations. 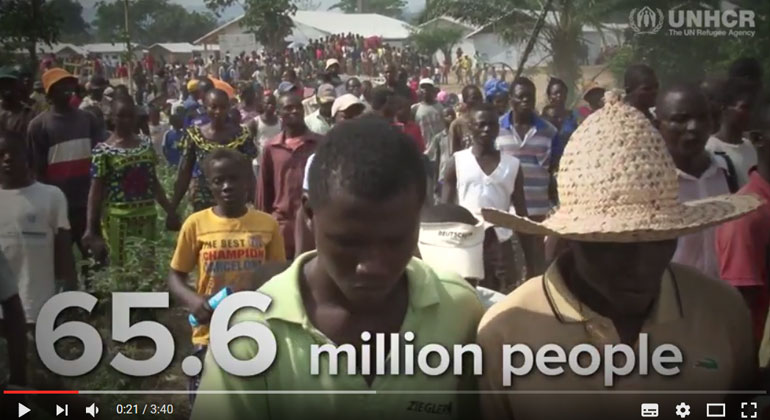 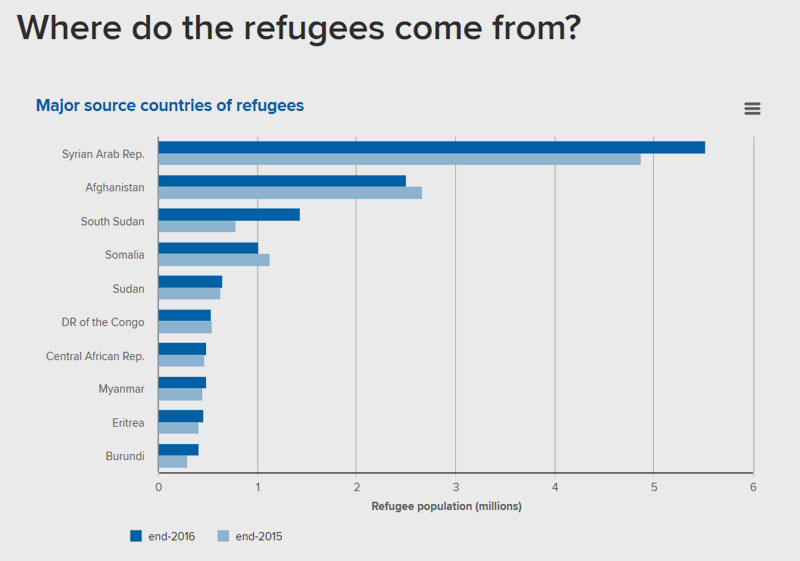