The first global map to be produced on potential insecticide contamination

Streams within approx. 40% of the global land surface are at risk from the application of insecticides. These were the results from the first global map to be modelled on insecticide runoff to surface waters, which has just been published in the journal Environmental Pollution by researchers from the Helmholtz Center for Environmental Research (UFZ) and the University of Koblenz-Landau together with the University of Milan, Aarhus University and Aachen University . According to the publication, particularly streams in the Mediterranean, the USA, Central America and Southeast Asia are at risk.

Unlike other chemicals, agricultural pesticides are intentionally applied to the environment to help farmers control insects, weeds and other potentially harmful pests threatening agricultural production. They can therefore affect land ecosystems but also surface waters from runoff. According to estimates, ca. 4 million tons of agricultural pesticides are applied annually, equating to an average of 0.27 kilograms per hectare of the global land surface. „We know from earlier investigations for example that pesticides can reduce the biodiversity of invertebrates in freshwater ecosystems by up to 42 percent and that we can expect an increased application of pesticides as a result of climate change“, explains Prof. Dr. Matthias Liess from the UFZ, who was recently appointed to a term of five years on the scientific advisory board “National Action Plan on Sustainable Use of Plant Protection Products” where he advises the Federal Ministry of Food and Agriculture. Liess warns of an increase in the application of pesticides in many developing countries as farmers increasingly switch from traditionally extensive agricultural practices to more intensive ones. Until now the global extent of the potential water pollution from the application of insecticides has remained largely unknown.

The international team of scientists therefore came up with a global model with a raster of ca. ten kilometres, into which agricultural data from FAO and land use data from NASA among other data were entered. Annual average temperatures and monthly maximum precipitation measurements from around 77,000 weather stations were also taken into account. Following that, the researchers then estimated the so-called runoff potential (RP), in other words the amount of insecticides that enters streams and rivers through the rainwater from agricultural land. „In this respect, daily rainfall intensity, terrain slope, and insecticide application rate play an equally important role as well as the crops cultivated“, explains junior professor Dr. Ralf B. Schäfer from the University of Koblenz-Landau. „In order to test such complex models, we therefore carried out control measurements of insecticide contamination in freshwater ecosystems from four different regions“.

Several world maps were produced: the vulnerability map only takes into account the geographic and climatic background. The risk map on the other hand shows the risks from this natural vulnerability through anthropogenic land use. In Central Europe, scientists largely assessed the risk for water bodies as medium to high. In the northern hemisphere, insecticide runoff presented an overall more significant latitudinal gradient. „The risks of insecticide exposure to water bodies increased significantly the further South one travelled on a North-South gradient in Europe, North America and Asia, mainly driven by a higher insecticide application rate as a result of higher average temperatures“, Dr. Mira Kattwinkel reports, who is now conducting research at the Swiss Federal Institute of Aquatic Science and Technology (Eawag). Because the economy and the population are growing rapidly in many countries of the southern hemisphere, scientists expect a higher insecticide application rate in those countries in the future to cover an increase in agricultural production. The map could therefore still change colour considerably in other parts of the world. At the moment it is water bodies in the Mediterranean, the USA, Central America and Southeast Asia that are particularly vulnerable.

In Southeast Asia, countries such as the Philippines or Vietnam are greatly affected for example. UFZ researchers are looking into solutions for such regions within the framework of the LEGATO-project together with the International Rice Research Institute (IRRI), in an attempt to reduce pesticide application rates. One approach for example could be to revitalise the functioning of ecosystems so that the natural competitors of rice pests can help to avoid their mass reproduction and subsequent harvest yield losses.

„Our analysis provides a global map of hotspots for insecticide contamination that are a major risk for biodiversity in water bodies. To our knowledge this is the first study that assesses insecticide contamination of water bodies on a global scale“, Prof. Dr. Matthias Liess summarizes the significance of the new investigation. The researchers intend to use the global map to sensitize citizens and authorities about this issue in vulnerable regions and to incite local investigations. Buffer zones along the edge of water bodies can significantly reduce negative impacts for example. Efficient environmental management and conservation efforts in the future should focus on informing authorities and farmers about the costs, impacts and alternatives. Ultimately, mitigation and management takes place at the local level, determining the extent to which a water body will be affected under the application of such chemicals.
Tilo Arnhold 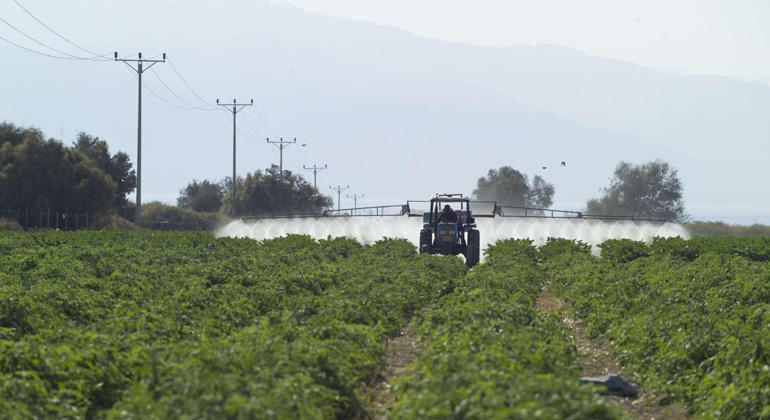