Agrophotovoltaics (APV), a technology which combines the production of solar electricity and crops on the same land, has already been successfully demonstrated in pilot projects in several European countries.

he Fraunhofer Institute for Solar Energy Systems ISE in cooperation with the Innovation Group “APV-Resola” have proven the feasibility of Agrophotovoltaics with a 194 kWp APV pilot system realized on a farm near Lake Constance in Germany. The project results showed that APV increases the land-use efficiency by 60 percent. “The next step is to establish a proof of concept for the APV system technology in developing and threshold countries. Due to the higher levels of solar radiation in these countries, APV can make better use of its strengths. The potential is enormous,” says Stephan Schindele, project head of Agrophotovoltaics at Fraunhofer ISE, who is now focusing on transferring the technology to other climatic zones as well as other applications.

Fraunhofer ISE, together with Fraunhofer Chile, tested three 13 kWp APV systems in the Chilean communities of El Monte, Curacavi and Lampa. The Chilean APV pilot project ended in spring 2018 and was financially supported by the Santiago de Chile Metropolitan Region Government. In the project, investigations were carried out to determine which plants benefit from less radiation exposure, i.e. shading from the APV array. Sensors measured the meteorological data like solar radiation, humidity, soil moisture and ground temperature. The data was also used to optimize the on-site irrigation system. The operation of the three farms chosen for the project differed greatly: The first APV system was installed on a farm using very professional methods to grow broccoli and cauliflower. The solar electricity was used in the production process to clean, package and cool the produce. The second APV pilot system was installed on a family-run farm that grows herbs and other crops. The third system was set up in a remote region with a weak infrastructure. Access to the electricity grid is available, but electric service is quite irregular. The APV plant provided electricity for seven families, providing power to an incubator for hatching chicken eggs, among other things.

The three APV systems in Chile are the first of their kind in Latin America. The Fraunhofer Chile supports the scientific parts of the project, and the Fraunhofer Center for Systems Biotechnology CSB analyzes the agricultural aspects. The Fraunhofer Center for Solar Energy Technologies CSET addresses the energy-related and technical questions in close consultation with Fraunhofer ISE. Investigations involve adapting and optimizing the APV technology according to the specific climatic and economic conditions in Chile. The results of both the crop and solar power production are very positive. As a result, the APV research at Fraunhofer Chile shall be expanded thanks to the support of the local government. The three pilot plants will be monitored for three additional years, operating them as on-field labs. A long term plan involving different type of crops has been coordinated with the farmers, so it will be possible to test the concept with a large variety of products. “At the beginning of the project, there was a transfer of technology and know-how from Germany to Chile. In the meanwhile, the transfer is taking place at the same level in both directions. Fraunhofer ISE is profiting from the new experiences with APV in Chile and vice versa,” remarks Stephan Schindele.

In the arid and semi-arid regions in Northern and Central Chile, there is great potential for APV, since a large percentage of the people live from agriculture, which is impacted by the increasing amount of dry periods, desertification and water scarcity due to climate change. The projects show that the partial shading of crops planted underneath APV can reduce their need for water and also offer livestock shelter from the sun. Also, it is expected that various fruits which normally do not grow well in dry climates with high solar radiation would grow underneath an APV system. At the same time, the generated electricity can be used to operate water pumps or desalination systems. In remote regions, the quality of life is increased immensely just with the electric output of a few solar modules providing improved access to information, education and also better medical care. In sub-Saharan Africa, about 92 percent of the rural population have no access to electricity. APV offers new sources of income to the local population and at the same time reduces the dependence on fossil fuels, needed, for example, for diesel generators. Besides this, solar power can be used for cooling and processing agricultural crops, making them preservable and also more profitable.

Aquaculture: A New Application for APV

In cooperation with the Deutsche Gesellschaft für Internationale Zusammenarbeit GIZ GmbH Vietnam, Fraunhofer ISE carried out a proof-of-concept study analyzing the possibility of installing Agrophotovoltaics at shrimp farms located in the Vietnamese Mekong Delta. In this region, there is an increasing competition for land between aquaculture and renewable energy.  The current project SHRIMPS “Solar-Aquaculture Habitats as Resource-Efficient and Integrated Multilayer Production Systems” has the potential to solve a series of systemic problems in Vietnam. It would promote the deployment of renewable energy as well as enact measures to counteract climate change, expand shrimp production yet protect water resources, decrease land use and reduce CO2 emissions at the same time. Based on the first analyses, the pilot project in Bac Liêu can save about 15,000 carbon dioxide emissions and reduce the water use by 75 percent compared to a conventional shrimp farm. “By combining aquaculture and photovoltaics, the land use rate increases by at least 65 percent compared to an open field PV plant,” so Max Trommsdorff from Fraunhofer ISE. This project can contribute an important part in reducing land use conflicts in this densely populated country while helping to meet the growing energy consumption (10 percent annually) with renewable energy sources. The aquafarm operators enjoy other advantages from this technology, such as protection against predatory animals, improved working conditions due to shading and a stable, lower water temperature that helps to promote the shrimps’ growth. With respect to the increasing growth of both PV and aquaculture worldwide, this concept becomes relevant for numerous other developing and threshold countries. “Fraunhofer ISE promotes the establishment of further APV demonstration plants in development and threshold countries with the aim of making a lasting contribution to improving resource-efficient land use and regenerating parched soil,” explains Stephan Schindele of Fraunhofer ISE. 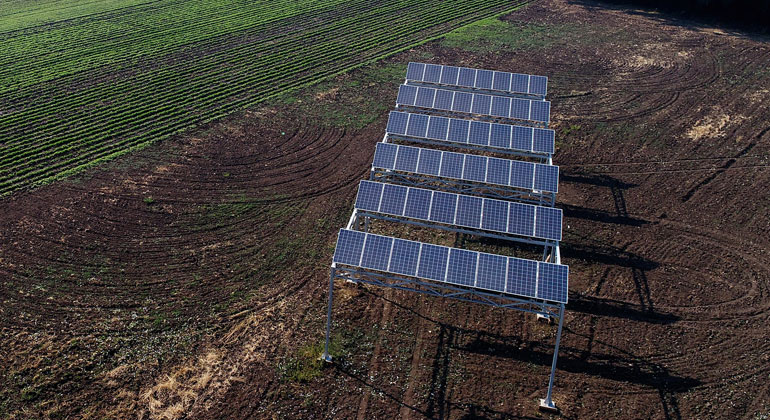