A new catalyst breaks carbon dioxide into useful chemicals faster, cheaper, and more efficiently than the standard method, reports a team of researchers in this week’s issue of PNAS. The discovery could make it possible to economically turn carbon dioxide into fuels.

Carbon dioxide is a stable, abundant gas. In fact it’s a little too abundant, and the extra carbon dioxide in the atmosphere is changing the planet’s climate. Knowing this, many chemists are working on efficient ways to turn carbon dioxide into other useful products. But carbon dioxide’s stability makes this tough. It’s hard to get the molecule, happy on its own, to react with anything else.

The best existing technique to electrochemically break carbon dioxide into pieces that will chemically react uses a catalyst made of platinum. But platinum is a rare, expensive metal.

Now, a team of researchers led by Yongtao Meng, a former UConn graduate student in the lab of Institute for Materials Science Director Steve Suib and now a researcher at Stanford University, has come up with a better way. They created an electrochemical cell filled with a porous, foamy catalyst made of nickel and iron. Both metals are cheap and abundant. When carbon dioxide gas enters the electrochemical cell, and a voltage is applied, the catalyst helps the carbon dioxide (a carbon atom with two oxygens) break off oxygen to form carbon monoxide (a carbon atom with one oxygen.) The carbon monoxide is very reactive and a useful precursor for making many kinds of chemicals, including plastics and fuels such as gasoline.

“It’s almost unheard of. Typically in a good system you’ll get 90 to 95% efficiency, but it might not be stable, might not work at the same low voltage or might not be cheap,” says Suib. This process has all of that.

Suib’s lab used scanning transmission electron microscopy to map cross-sections of the new nickel-iron catalyst, revealing its internal structure. Technically it’s a nickel iron hydroxide carbonate, with a porous structure that allows the carbon dioxide gas to flow through it. Suib’s microscopy work showed the catalyst stayed intact and did not degrade from use.

The next step in the process is to see if it can be scaled up, made in bulk, and tested in industrial situations such as power plants that produce large amounts of carbon dioxide as a waste product. 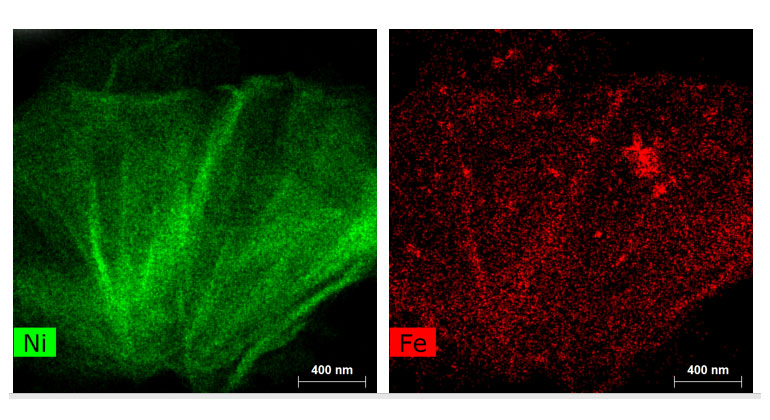