Scientists calculate the fate of the Greenland meltwater. The salinity of the waters around Greenland plays an important role in driving the Gulf Stream.

There are concerns that a progressive freshening by the increasing ice losses from the Greenland ice sheet could influence and weaken the current system. New model calculations conducted by an international research team suggest, however, that a large fraction of this meltwater is effectively removed from the most sensitive areas by swift, narrow boundary currents, delaying the influence on the Gulf Stream. The study is published today in the international journal Nature Geoscience.

Greenland’s glaciers are melting. Recent work by researchers at the University of Bristol found a 50 per cent increase in the freshwater flux since 1990. Due to both enhanced summer melt and calving of outlet glaciers more than 5000 cubic kilometers of extra meltwater have been flowing into the sea, equivalent to a quarter of the volume of the Baltic Sea. The fate of this freshwater is of great importance for the system of ocean currents in the North Atlantic, which is governed by the density of the waters surrounding Greenland. A reduction in the water density especially in the Labrador Sea due an increased influx of freshwater could ultimately lead to a weakening of the current system, including the Gulf Stream.

Using a newly developed computer model, an international team of scientists led by the GEOMAR Helmholtz Centre for Ocean Research Kiel has now simulated in detail the pathways and effects of the additional meltwater. “The effects of the melting Greenland glaciers initially remain smaller than expected, since a large part of the meltwater is effectively flushed out by fast, narrow currents along the coastline of North America. Thus changes in the critical, northern seas are delayed”, explains GEOMAR researcher Prof. Claus Böning, lead author of the study.

The computer model takes into account the regional differences in meltwater discharge trends and very fine details of the ocean currents. This fine detail allowed the researchers to assess more accurately the influences of the narrow boundary currents and small-scale eddies on the water exchange between the coastal shelf and the deep ocean.

The model calculations showed that more than half of the meltwater is transported southwards along the Canadian coast by the Labrador Current. Less than 20 percent remain in the area between Greenland and Labrador which is critical for the Gulf Stream system. The model suggests that the melting-induced impact on ocean salinity is, to date, only half as large as natural variations measured in the past decades.

However, the simulation also shows a progressive trend in the freshening of the Labrador Sea. “If we project the rise in Greenland melting rates into the future, we expect first noticeable changes in the Labrador Sea in two or three decades”, emphasizes Professor Böning, “in this sense the Gulf Stream may just get some breathing space”. “Meltwater fluxes from Greenland have been accelerating in recent years and if, as seems likely, this trend continues we could see changes in ocean circulation even sooner” explains co-author Jonathan Bamber, Professor at the University of Bristol.

Background information:
The model computations were performed at the North-German Supercomputing Alliance (HLRN). The study was supported by the cooperative programme RACE (Regional Atlantic Circulation and Global Change, BMBF grant 03F0651B) and the Cluster of Excellence “The Future Ocean” funded by the DFG. 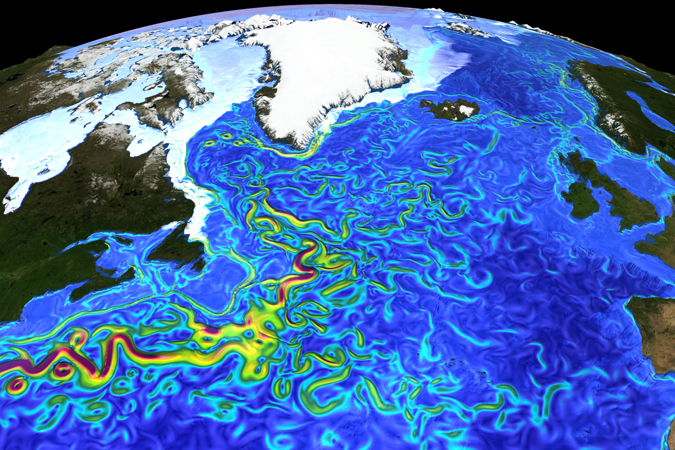 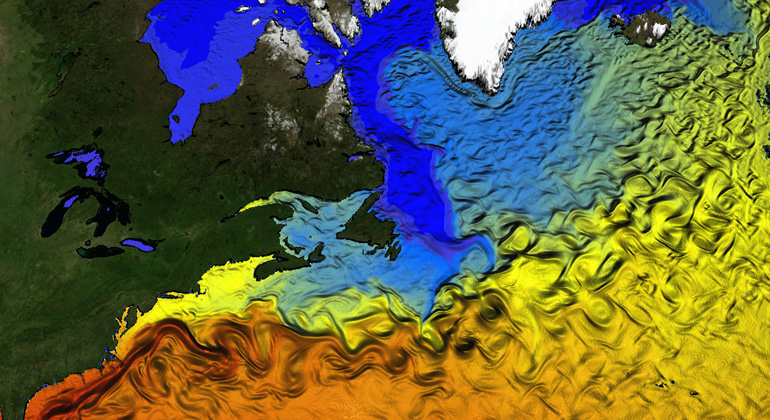