Greenhouse gas emissions caused by urban households’ purchases of goods and services from beyond city limits are much bigger than previously thought.

These upstream emissions may occur anywhere in the world and are roughly equal in size to the total emissions originating from a city’s own territory, a new study shows. This is not bad news but in fact offers local policy-makers more leverage to tackle climate change, the authors argue in view of the UN climate summit COP23 that just started. They calculated the first internationally comparable greenhouse gas footprints for four cities from developed and developing countries: Berlin, New York, Mexico City, and Delhi. Contrary to common beliefs, not consumer goods like computers or sneakers that people buy are most relevant, but housing and transport – sectors that cities can substantially govern.

“It turns out that the same activities that cause most local emissions of urban households – housing and transport – are also responsible for the majority of upstream emissions elsewhere along the supply chain,” says lead-author Peter-Paul Pichler from the Potsdam Institute for Climate Impact Research (PIK). “People often think that mayors cannot do much about climate change since their power is restricted to city limits, but their actions can have far-reaching impacts. The planned emission reductions presented so far by national governments at the UN summit are clearly insufficient to limit global warming to well below 2 degrees Celsius, the target agreed by 190 countries, therefore additional efforts are needed.”

Housing and transport cause most city emissions, locally but also upstream

Cement and steel used for buildings take a huge amount of energy – typically from fossil fuels – to be produced, for instance. If a city instead chooses to foster low carbon construction materials this can drastically reduce its indirect CO2 emissions. Even things that cities are already doing can affect far-away emissions. Raising insulation standards for buildings for example certainly slashes local emissions by reducing heating fuel demand. Yet it can also turn down the need for electric cooling in summer which reduces power generation and hence greenhouse gas emissions in some power plant beyond city borders.

In transport, expanding public facilities can minimize local emissions from car traffic. This reduces the number of cars that need to be built somewhere else, using loads of energy. So this is a win-win. But, again, more can be done. Cities can decide from which sources they procure the power needed to run, for instance, their subway trains or electric buses. By choosing energy from solar or wind, city governments could in fact close down far-away coal-fired power plants.

Interestingly, while the greenhouse gas footprint in the four cities that the scientists scrutinized range from 1.9 (Delhi) to 10.6 tons (New York) of CO2 equivalent per person and year, the proportions of local to upstream household emissions as well as the relative climate relevance of housing and transport turn out to be roughly the same. The international reach of upstream emissions is vast but varies. In terms of emissions, Berlin’s global hinterland is largest, with more than half of its upstream emissions occurring outside of Germany, mostly in Russia, China and across the European Union. But also around 20% of Mexico City’s considerably smaller upstream emissions occur outside Mexico, mainly in the US and China.

“Measuring indirect emissions of urban populations so far has often been considered to be unfeasible, at least in a way that makes it possible to compare different cities,” says Helga Weisz, senior author of the study and a research domain co-chair at PIK. “We show that it is possible, but you have to invest the effort to actually do it.” Her team analyzed huge amounts of existing data on economic input and output of different regions and successfully combined these with data on emission intensity of production in a lot of different sectors. The methodology that the scientists put together is in principle applicable in any place, enabling more effective collaboration between cities to reduce greenhouse gas emission footprints.

“The power of cities, open interconnected systems of great density, to tackle climate change even in times of uncertainty on the national and international level has been underestimated by both many local decision-makers and most of the international community,” says Weisz. “Cities must be encouraged and enabled to focus on their full emission spectrum – local and upstream– as they continue to develop their climate mitigation plans.” 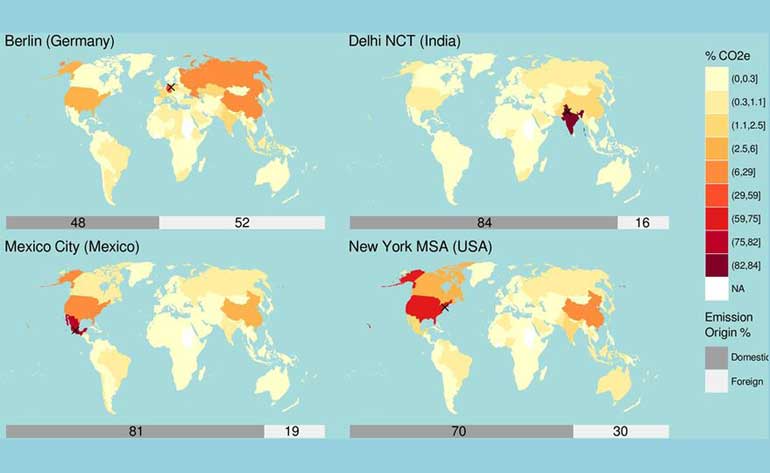