Coal power versus wind and solar energy – debates about the Paris climate targets often centre around electricity supply. Yet, even in a world of stringent climate policies and a clean power generation, the remaining use of fossil fuels in industry, transport and heating in buildings could still cause enough CO2 emissions to endanger the climate targets agreed on by the international community, an international team of researchers finds. Published in Nature Climate Change, their elaborate study is the first to focus specifically on the residual fossil fuel emissions from sectors that are not as easily decarbonized as power generation.

“We wanted to decipher what really makes the difference in terms of carbon budgets and residual emissions. To identify crucial decarbonization bottlenecks towards 1.5-2°C stabilization, we focused on the role of fossil fuel emissions that originate in industries like cement or steel making, fuel our transport sector from cars to freight to aviation and goes into heating our buildings,” explains Shinichiro Fujimori, researcher from the National Institute for Environmental Studies (NIES) and Kyoto University in Japan. “These sectors are much more complicated to decarbonize than our energy supply, as there are no such obvious options available as wind and solar electricity generation.”

It turns out that these are the activities that crucially determine how much carbon dioxide will be emitted within this century; if and how much the world will have to rely on negative emissions and ultimately if the internationally agreed climate targets can be met.

For the 1.5°C temperature limit, negative emissions are no longer an option, but a necessity

The Paris targets of keeping global warming well below 2°C and possibly even at 1.5°C imply a tight limit on cumulative CO2 emissions until 2100. To put this into perspective: the remaining budget for the 1.5°C target could be as low as 200 Gigatons of CO2, which is in stark contrast to the 4.000 Gigatons of CO2 that would be emitted if current trends continue. Mitigation efforts pledged so far are inadequate to reduce emissions sufficiently. This gives rise to concerns about the increasing reliance on uncertain and potentially risky technologies for so-called negative CO2 emissions, pulling greenhouse-gases out of the atmosphere by scaling up for instance bioenergy plantations or carbon capture and storage (CCS).

Hence, the researchers explored different decarbonization pathways towards the Paris climate targets. With sobering results: “We found that even with enormous efforts by all countries, including early and substantial strengthening of the intended nationally determined contributions (the NDCs), our calculations show that residual fossil carbon emissions will remain at about 1000 Gigatons of CO2,” explains Gunnar Luderer from the Potsdam Institute for Climate Impact Research (PIK, member of Leibniz Association), lead author of the study. “This seems to be a lower end of what can be achieved with even the most stringent climate policies, because much of the residual emissions are already locked-into the system due to existing infrastructures and dependencies on fossil fuels. To aim for the ambitious 1.5°C target for end-of-century warming would mean that an incredibly huge amount of at least 600 Gigatons of CO2 removal was required,” Luderer points out. “So negative emissions are no longer a choice but rather a necessity.”

The team of modelers from all over Europe, the USA and Japan worked with seven state of the art technology-rich Integrated Assessment Modeling (IAM) frameworks – sophisticated computer simulations describing the social and economic interactions that determine climate change as well as the options to stabilize the climate by reducing greenhouse-gas emissions, taking into account temperature targets as well as the economic costs and technological options. Their study is the first multi-model comparison in the light of the Paris Agreement that contrasts scenarios of early strengthening of policy ambition in line with the 1.5 -2°C goals with scenarios assuming no strengthening of the countries climate pledges (NDCs) before 2030.

“Our analysis shows that beyond a rapid full scale decarbonization of power supply, stabilizing warming in the 1.5‐2°C range also requires substantial reductions in energy demand sectors like industry, transport and buildings,” stresses Zoi Vrontisi from E3MLab of the National Technical University of Athens. “In order to achieve the additional fossil fuel reductions required for 1.5°C stabilization, we need to accelerate energy efficiency improvements and a widespread electrification of energy demand.” The researchers also show that not strengthening the NDCs before 2030 would not only increase near-term emissions, but also hurts the longer term emission reduction potentials as it locks-in even more investments into fossil-based infrastructures and leaves the world unprepared to turn around for decarbonization, according to their study. This will further increase the dependence on carbon dioxide removal and  is likely to push the 1.5°C target out of reach altogether.

“Climate mitigation might be a complex challenge, but it boils down to quite simple math in the end: If the Paris targets are to be met, future CO2 emissions have to be kept within a finite budget,” summarizes Elmar Kriegler from the Potsdam-Institute for Climate Impact Research. “The more the budget is overrun, the more relevant will carbon dioxide removal technologies become, and those come with great uncertainties. While it may still be difficult to determine the exact remaining CO2 budget for 1.5°C, one thing is very clear: Ambitions to reduce fossil fuel emissions have to be ramped up substantially and soon to keep doors open to meet the Paris targets.” 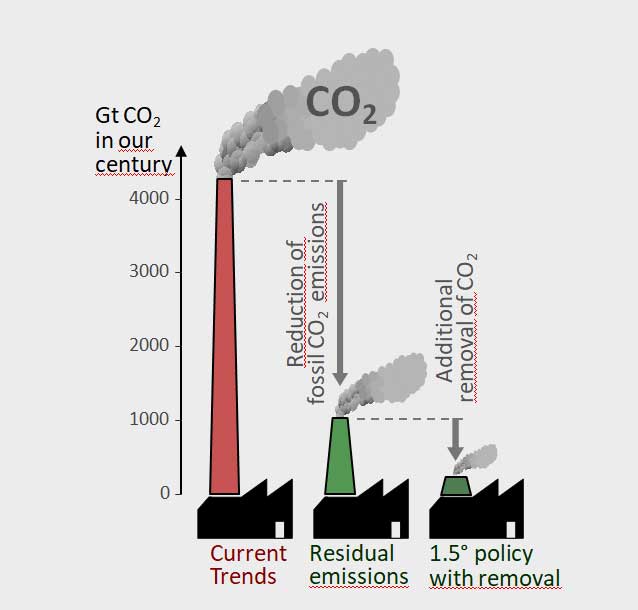