A research team from Leibniz IPHT has built electrodes with outstanding optical and electronic properties from leaves.

The researchers have coated leaf veins with copper and thus transformed them into electrically conductive and optically transparent electrodes. Designed on the basis of nature, the leaf-structure electrodes could be used to design novel solar cells, LEDs or displays.

“We took our inspiration from nature’s perfectly ingenious system and used the leaf veins of deciduous leaves to construct electrodes with a high power density and low material consumption,” reports Dr. Guobin Jia from Leibniz IPHT. He is first author of the study, which was published in the renowned journal Nano-Micro Letters.

Plant leaves behave like photochemical factories that convert water and CO2 into carbohydrates and oxygen through photosynthesis. Solar cells imitate this principle by converting sunlight directly into electricity. The fine, net-like branched leaf veins supply the leaf cells with water and nutrients and transport the carbohydrates produced by photosynthesis to other parts of the plant. “Thus, they have much in common with the electrodes in solar cells, batteries or LEDs that collect or distribute electrical current or signals,” explains Dr. Jonathan Plentz, who heads the Photonic Thin Film Systems working group at Leibniz IPHT. However, while the leaf veins remain functional even if parts of them are damaged, fractures in solar cells lead to a severe deterioration in performance.

Electrodes from the magnolia tree

The researchers have now taken advantage of the efficient transport network of the leaf veins to transmit electrical current. They detached the leaf green from leaves of the purple magnolia (Magnolia liliiflora), metallized the veins with copper and allowed electric current to flow through them. The leaf skeletons became transparent, conductive electrodes. The sheet resistance is two orders of magnitude lower — and thus the electrical performance is correspondingly better — than with conventional ITO (indium tin oxide) thin films, which are used for transparent electrodes in touch screens or thin-film solar cells, for example. The sheet electrodes also proved superior to conventional ones in terms of optical transmission in the UV and infrared range.

Using structures from nature could prove to be not only more efficient but also cheaper. “We need much less material for electrodes made from leaves,” explains Jonathan Plentz. In addition, the copper consumption for metallization is very low. The researcher therefore sees the metallized leaves as an alternative to conventional electrodes for solar cells. “The branched structure of the leaf veins is optimally designed for transport.” In contrast, the comb-like geometry of the electrodes on conventional solar cells requires an even silver layer that is unnecessarily thick in the peripheral areas. If the superior, vein-like structures of broadleafs were used for high-performance electrodes, Guobin Jia estimates that the consumption of silver for the mass production of solar cells could be reduced to less than a tenth of the current level.

In addition, the research team believes that the electrically conductive and optically transparent electrodes made of natural materials could open up new possibilities for the construction of batteries and supercondesators as well as for the design of novel LEDs or displays. “In general, we can learn from the efficiency of nature’s solutions,” says Guobin Jia. According to the principle of biomimicry, these solutions could also be applied to our reality, for example to rethink the organization of modern transportation systems. “If we were able to better understand the excellent distribution and transport function of leaf veins with the help of a mathematical model, this could help to improve completely different transport processes that run in two directions,” says the researcher. This applies, for example, to road systems in large cities, data transmission in fiber optic networks or power grids. 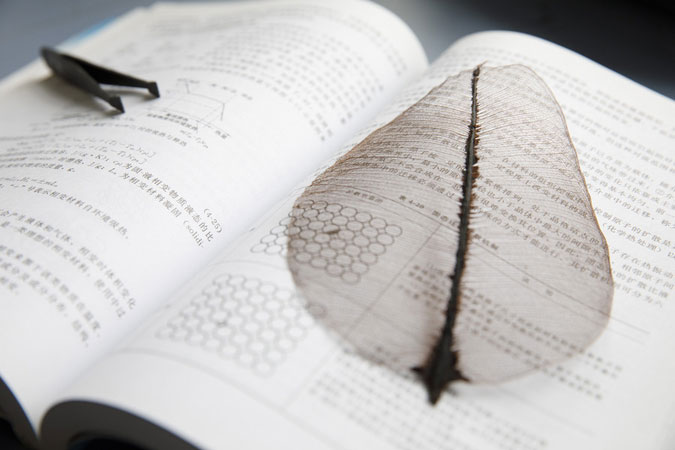