Sunny prospects: Under the direction of the Fraunhofer Institute for Laser Technology ILT in Aachen, five project partners from industry and research are developing technologies for the roll-to-roll production of organic photovoltaics in the EffiLayers project.

It is about organic photovoltaic cells (OPV cells), which are less efficient than traditional silicon-based solar cells, but are flexible and transparent. These last two advantages allow OPV cells to be functionally and decoratively integrated, for example, into building facades. By developing an efficient production process, the partners intend to boost the industrial mass production of OPV cells.

Since the individual layers of the OPV cells are only a few nanometers thick, the technology only requires small amounts of material to coat large areas of flexible substrates. This way, producers save on resources. The roll-to-roll process also makes it possible to manufacture on an industrial scale. Compared to classical silicon photovoltaic production, this process has lower manufacturing costs because energy-intensive and costly process steps are no longer necessary.

In the predecessor projects FlexLas and PhotonFlex, the partners focused on individual steps of the complex roll-to-roll production process for OPV cells. In September 2019, the EffiLayers research project was launched with the aim of implementing and integrating innovative analysis and process technologies into the production process. Individual process steps are monitored by high-resolution sensors and implemented in a process control system.

“We would like to implement the process in a manner oriented to the industry”, explains Ludwig Pongratz, a researcher at Fraunhofer ILT. “Our approach is to replace expensive, energy-intensive sputtering processes with wet-chemical coating processes”, says Pongratz.

The functional layers are applied on top of each other via wet-chemical solutions by means of heated slot-die coating. The 10 to 250 nm thick layers are processed with various laser sources from the short pulse and ultrashort pulse range. In the continuous process, the laser drying and laser thin film ablation are used to separate individual cells as well as to remove layers in the edge area. The OPV cells are then sealed by laser encapsulation with a barrier film to protect them from environmental factors.

Pongratz explains: “To produce OPV cells having an area of ten square meters, we only need three grams of organic active material. Because we were able to successfully implement many innovative process steps into our plant in the first two projects, the funding of a third project was approved with funds from the European Regional Development Fund (ERDF)”.

Laser scribing – a complex process in the ultra-short pulse range

In the EffiLayers research project, an ultrashort pulse (USP) laser in the femtosecond regime plays an important role. It separates the individual layers so that individual cells are connected in series. “With laser scribing, we guide eleven partial beams onto the surface while the film moves”, explains Pongratz. “The laser beams selectively separate the composite layers so that, at the end, twelve serially connected subcells are produced on a single film. The challenge is to selectively ablate the individual nanometer-thick layers without damaging the underlying layers or causing short circuits”.

Integration between industry and research

In order to map the entire process, Fraunhofer ILT is cooperating with the Chair of Applied Laser Technologies (LAT) at the Ruhr-Universität Bochum. Both research institutes are working closely with the plant manufacturer Coatema Coating Machinery GmbH from Dormagen, the communication experts of Ortmann Digitaltechnik GmbH from Attendorn and LIMO GmbH from Dortmund, the latter of which provides the optical components for the eleven partial beams.

In the meantime, development in the field of organic materials has also reached new standards. These novel materials are incorporated into EffiLayers project in order to achieve a significant increase in solar cell efficiency and to make OPV cells usable for indoor applications as well. Pongratz: “For us it is important to map the process in an integrated manner and to develop the necessary process monitoring and control along with our partners”. 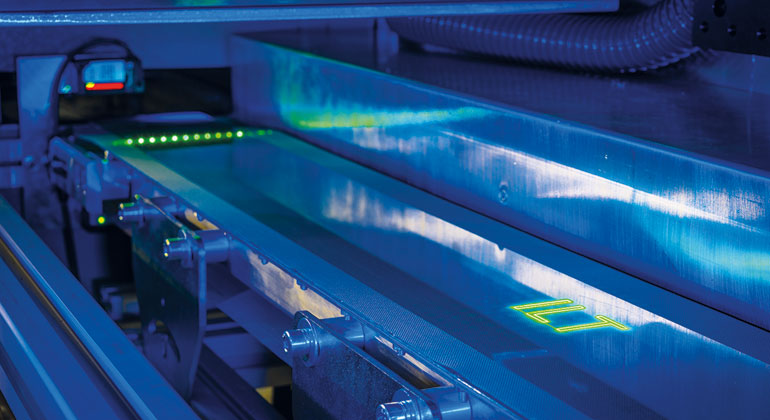