Scientists from Austria, Finland and Hungary are using laser scanners to study the day-night rhythm of trees. As it turns out, trees go to sleep too.

Most living organisms adapt their behavior to the rhythm of day and night. Plants are no exception: flowers open in the morning, some tree leaves close during the night. Researchers have been studying the day and night cycle in plants for a long time: Linnaeus observed that flowers in a dark cellar continued to open and close, and Darwin recorded the overnight movement of plant leaves and stalks and called it “sleep”. But even to this day, such studies have only been done with small plants grown in pots, and nobody knew whether trees sleep as well. Now, a team of researchers from Austria, Finland and Hungary measured the sleep movement of fully grown trees using a time series of laser scanning point clouds consisting of millions of points each.

Trees droop their branches at night

“Our results show that the whole tree droops during night which can be seen as position change in leaves and branches”, says Eetu Puttonen (Finnish Geospatial Research Institute), “The changes are not too large, only up to 10 cm for trees with a height of about 5 meters, but they were systematic and well within the accuracy of our instruments.”

To rule out effects of weather and location, the experiment was done twice with two different trees. The first tree was surveyed in Finland and the other in Austria. Both tests were done close to solar equinox, under calm conditions with no wind or condensation. The leaves and branches were shown to droop gradually, with the lowest position reached a couple of hours before sunrise. In the morning, the trees returned to their original position within a few hours. It is not yet clear whether they were “woken up” by the sun or by their own internal rhythm.

“On molecular level, the scientific field of chronobiology is well developed, and especially the genetic background of the daily periodicity of plants has been studied extensively”, explains András Zlinszky (Centre for Ecological Research, Hungarian Academy of Sciences). “Plant movement is always closely connected with the water balance of individual cells, which is affected by the availability of light through photosynthesis. But changes in the shape of the plant are difficult to document even for small herbs as classical photography uses visible light that interferes with the sleep movement.”
With a laser scanner, plant disturbance is minimal. The scanners use infrared light, which is reflected by the leaves. Individual points on a plant are only illuminated for fractions of a second. With this laser scanning technique, a full-sized tree can be automatically mapped within minutes with sub-centimeter resolution.

“We believe that laser scanning point clouds will allow us to develop a deeper understanding ofplant sleep patterns and to extend our measurement scope from individual plants to larger areas, like orchards or forest plots,” says Norbert Pfeifer (TU Wien).

“The next step will be collecting tree point clouds repeatedly and comparing the results to water use measurements during day and night”, says Eetu Puttonen.  “This will give us a better understanding of the trees’ daily tree water use and their influence on the local or regional climate.” 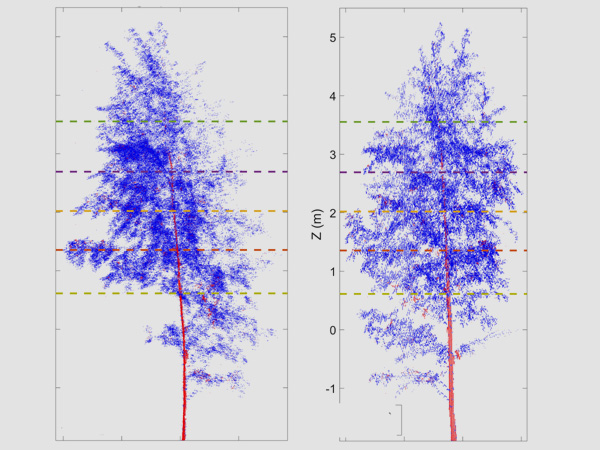