The iDiv Ecotron, a central experimental platform of the DFG Research Centre iDiv, was officially launched during a ceremony last Wednesday. Researchers will use this unique facility to better understand the consequences of species loss. The iDiv Ecotron will enable investigations into the interactions within food webs among plants, animals, microbes and the soil under controlled conditions in 24 experimental chambers.

Over 3.7 million euros have been invested into this modern platform, which is operated jointly by the German Centre for Integrative Biodiversity Research (iDiv) Halle-Jena-Leipzig and the Helmholtz Centre for Environmental Research (UFZ), and is anticipated to bridge the gap between simple laboratory experiments and complex ecosystem approaches. The iDiv Ecotron enriches the field research station of the UFZ in Bad Lauchstädt, which is gaining national and international stature as an ecological research station due to the cooperation between the UFZ and iDiv.

Many human activities are causing species loss. According to a number of estimates, numerous species of invertebrates are becoming extinct daily. Yet, what does this mean for the functioning of ecosystems? The following is clear: high species diversity has a positive effect on numerous functions of ecosystems. Thus, for example, a large number of plant species increases the production of biomass such as hay and wood, or the storage of climate-impacting carbon in the soil. This is demonstrated by experiments from various research platforms such as the Jena Experiment or the Biodiversity Exploratories of the German Research Foundation, which also involve researchers from iDiv and UFZ.

Little is known, however, about the role of small herbivores (e.g. snails or caterpillars), predators (e.g. ladybirds or spiders) or animals that live underground (e.g. earthworms or nematodes) and micro-organisms (e.g. bacteria or fungi). We know that these organisms play an important role in the food web and have a positive influence on many functions of ecosystems. Pollinators like bees and bumblebees, for example, are indispensable for the reproduction of many plant species. Other insects such as ants help plants spread their seeds. Decomposers such as earthworms and soil micro-organisms recycle nutrients for plant growth. But such dependencies between different food web components have, so far, been investigated in closer detail in only a few cases. Researchers plan to use the new research platform to change this. The iDiv Ecotron has been designed to find out how the disappearance of species at different locations of the food web impacts the functioning of ecosystems. This fundamental biological research has far-reaching economic relevance: functioning ecosystems are the basis for a series of so-called ecosystem services such as the provision of clean drinking water, food, and energy sources, which nature provides to people. UFZ scientists estimate that insects benefit the global economy in the realm of approximately 150 billion euros per year, just by pollinating cultivated plants in agriculture. Until now, it has been very difficult to make such estimates for other animals or micro-organisms.

How many losses can ecosystems cope with?

If many species are present, this has positive effects on ecosystems. But what happens when certain species disappear from complex food webs? Can their function be taken over by other species? How many losses can ecosystems take? The iDiv Ecotron chambers carefully examine the food web in all its complexity. In addition, researchers can replace or entirely remove certain animal and plant species in the closed systems. “We can examine, for example, the interplay and the interactions among different species above and below the soil”, explains Prof. Nico Eisenhauer (iDiv and Leipzig University), who manages the facility. “Similar to a climate chamber, which simulates the warmer climate of the future, the iDiv Ecotron enables us to look at a future world which contains fewer species.”

In doing so, Eisenhauer and his colleagues wish to investigate three key issues:

Does the complexity of the interactions between the species affect the functions of an ecosystem? How dependent are ecosystem functions on the relationships between aboveground and belowground organisms and processes? What are the impacts of global change on biodiversity, interaction networks and ecosystem functions? These environmental issues are of far-reaching importance. The German Research Foundation (DFG) has, for that reason, funded the facility with roughly three million euros and is financing two employees. Also involved financially, the UFZ has modernised the hall of the iDiv Ecotron for three-quarters of a million euros and is financing one employee.

The goal of the experimental chambers is to explore ecosystem functions by manipulating complex animal and plant communities. The environmental conditions must be as constant as possible to avoid disruptive events, which could distort the results. The 24 chambers are therefore all structurally identical and deploy extensive technology, which sets and adjusts the light, temperature and precipitation. That means that, for the first time, it will be possible to manipulate aboveground and belowground communities and their interactions on relevant spatial scales. The “EcoUnits” are experimental chambers, which consist of a bottom section filled with soil, a top section, and a technical section, and stand 1.55 x 1.55 metres wide and 3.20 metres high. Each “EcoUnit” can be divided into up to four largely independent compartments, due to aboveground partition walls and underground steel cylinders (lysimeters). All chambers are equipped with extensive technology. This includes, for example, cameras that observe the interactions between animals and plants. “Because such a facility has not yet been built, we have invested a lot of time over the past years in developing and optimising the technology together with the manufacturers. In some areas, we had to enter uncharted territory, which has often not been easy. We’re so much happier that everything is now running and the scientific experiments can finally start”, reported Dr. Manfred Türke from the iDiv and Leipzig University, who is coordinating the work at the facility. After the pilot phase, the facility will also be made available to external scientists. A commission will decide on proposals and applications and allocate the capacities – as is customary for large-scale scientific research equipment of international importance.

The iDiv Ecotron enriches the field research station of the UFZ in Bad Lauchstädt, which is gaining in national and international stature as an ecological research station due to the cooperation between the UFZ and iDiv. In addition to a multitude of experiments in soil and biodiversity research at this location, since 2013 the UFZ has operated a globally unique outdoor experiment known as the Global Change Experimental Facility (GCEF), in which a seven-hectare test area is used to examine the impact of climate change on different forms of land use. “The research station in Bad Lauchstädt, with a total area of about 40 hectares, has in recent years already made a name for itself among ecologists, thanks to the highly varied range of experiments. The station is now getting a further boost thanks to its collaboration with iDiv. “And actually, many experiments have only just started”, says a delighted Prof. François Buscot, who as head of the UFZ department of soil ecology is jointly responsible for the research station of the UFZ in Bad Lauchstädt, and is also Deputy Director of iDiv. Three platforms are among the new experiments: the MyDiv tree diversity experiment, the NutNet global research initiative to examine changes in nutrient availability and Drought-Net, the global network to examine the effects of extreme drought. With immediate effect, the iDiv Ecotron will complement these field experiments in Bad Lauchstädt and enrich biodiversity research in central Germany. Volker Hahn / Tilo Arnhold 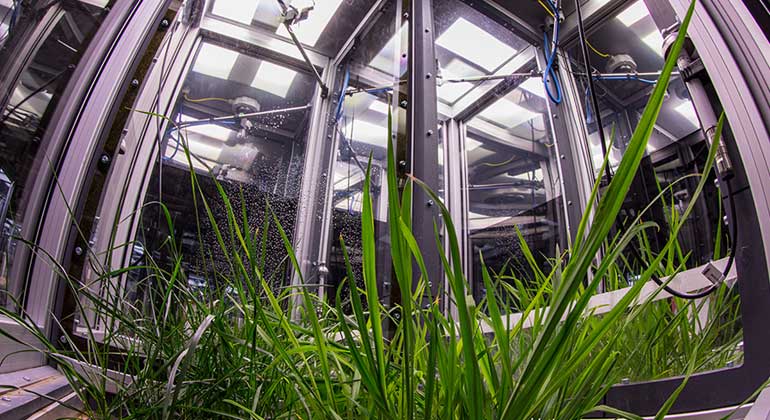 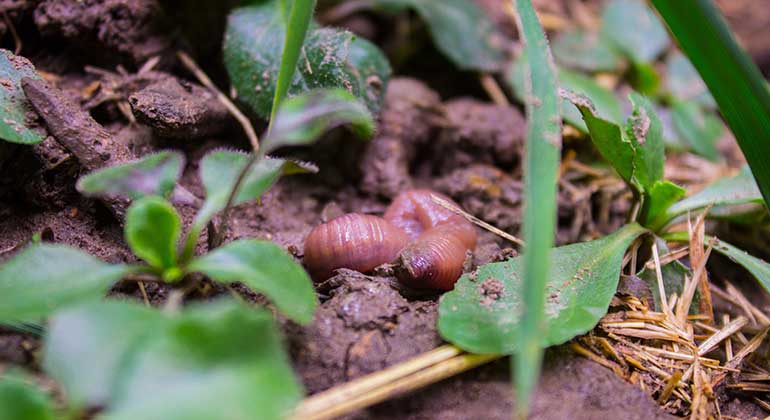