How does the expansion or intensification of arable farming affect global agricultural markets and biodiversity?

Global agricultural production must be further increased in the coming years in order to meet rising demand and changing patterns of consumption. This will require either intensification of cropland use or an expansion of farmland. Researchers based at LMU Munich, at the Kiel Institute for the World Economy, at the Helmholtz Center for Environmental Research (UFZ) and at Palacký University in Olomouc (Czech Republic) have now evaluated the trade-offs between food security and the preservation of biodiversity associated with both strategies in the context of global agricultural markets. The study appears in the journal Nature Communications.

“Agriculture is one of the major drivers of biodiversity loss worldwide, and increases in production are almost always achieved at the expense of biodiversity. But whether and where production rises due to intensification or expansion of cropland does make a difference,” says Dr. Florian Zabel of the Department of Geography and Remote Sensing at LMU.

The researchers involved in the interdisciplinary collaboration set out to identify those areas in which it would be profitable, under projected climatic and socioeconomic conditions for the next decade, to increase agricultural production by intensifying or expanding the use of land for farming. They then asked what effects each of these strategies would have on biodiversity and global agricultural markets.

“Our results show that, for a given rise in food production, the impact of cropland expansion on biodiversity is many times greater than that of the intensification scenario. This is because expansion can be expected to occur in those regions with the highest existing levels of biodiversity, mainly in Central and South America,” says Dr. Tomáš Václavík, who is in the Department of Ecology and Environmental Sciences at Palacký University in Olomouc. Near-term intensification of agriculture on existing cropland, on the other hand, primarily presents a threat to biodiversity in Sub-Saharan Africa.

However, while biodiversity is set at risk in those regions in which more food is produced, the study suggests that all parts of the world – including those in which the local rise is modest – will profit from the fall in food prices that ensues as a result of the overall growth in global production. “This result has potentially critical implications, because it suggests that, while all regions – including North America and the EU – will profit from sinking food prices, the threat to biodiversity is greatest in developing countries in the tropical regions,” says Dr. Ruth Delzeit of the Kiel Institute for the World Economy. The effects of intensification and expansion are also predicted to play out differently within these regions. Intensification promises the highest gains in food security in some regions of the tropics, principally India and Sub-Saharan Africa. In contrast, the study sees inhabitants of Latin American countries such as Brazil as the primary beneficiaries of lower food prices brought about by cropland expansion. However, in this region, the expansion strategy presents an especially serious threat to biodiversity.

In addition, the study shows that most existing nature reserves are not located in those regions of high species diversity that were identified as likely targets of cropland expansion. “Most of the areas with high levels of biodiversity that are suitable for agricultural expansion and intensification in the coming years are not currently protected. We therefore recommend to develop global mechanisms which recognize land as a limited resource. Measures should be implemented to protect biodiversity in landscapes that are in use rather than focusing solely on protection sites,” says Professor Ralf Seppelt of the Helmholtz Center for Environmental Research in Leipzig. This is the only practicable way to achieve a balance between the conservation of existing biodiversity and the need to increase global agricultural production. 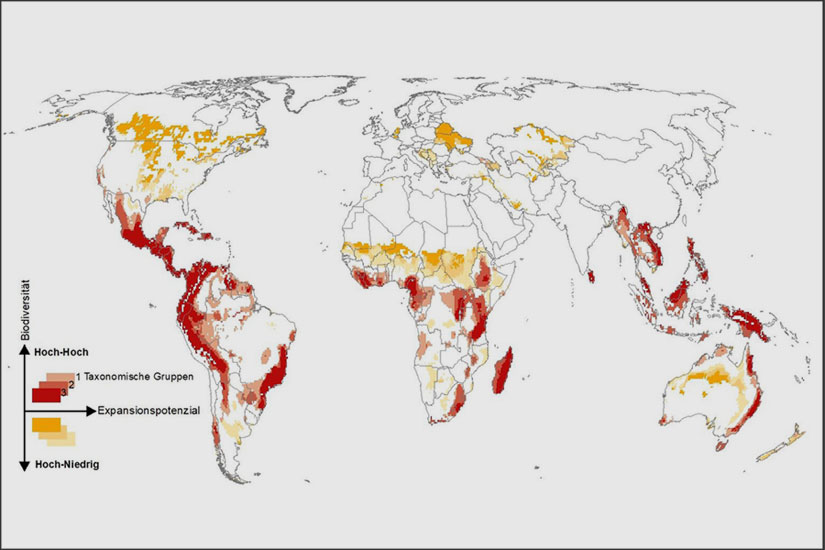 LMU Munich, at the Kiel Institute for the World Economy, at the Helmholtz Center for Environmental Research (UFZ) 2019