CO2 greenhouse gas amounts in the atmosphere are likely higher today than ever before in the past 3 million years.

For the first time, a team of scientists succeeded to do a computer simulation that fits ocean floor sediment data of climate evolution over this period of time. Ice age onset, hence the start of the glacial cycles from cold to warm and back, the study reveals, was mainly triggered by a decrease of CO2-levels. Yet today, it is the increase of greenhouse gases due to the burning of fossil fuels that is fundamentally changing our planet, the analysis further confirms. Global mean temperatures never exceeded the preindustrial levels by more than 2 degrees Celsius in the past 3 million years, the study shows – while current climate policy inaction, if continued, would exceed the 2 degrees limit already in the next 50 years.

“We know from the analysis of sediments on the bottom of our seas about past ocean temperatures and ice volumes, but so far the role of CO2 changes in shaping the glacial cycles has not been fully understood,” says Matteo Willeit of the Potsdam Institute for Climate Impact Research, lead author of the study now published in Science Advances. “It is a breakthrough that we can now show in computer simulations that changes in CO2 levels were a main driver of the ice ages, together with variations of how the Earth’s orbits around the sun, the so-called  Milankovitch cycles. These are actually not just simulations: we compared our results with the hard data from the deep sea, and they prove to be in good agreement. Our results imply a strong sensitivity of the Earth system to relatively small variations in atmospheric CO2. As fascinating as this is, it is also worrying.”

Studying Earth’s past and its natural climate variability is key to understanding possible future pathways of humanity. “It seems we’re now pushing our home planet beyond any climatic conditions experienced during the entire current geological period, the Quaternary,” says Willeit. “A period that started almost 3 million years ago and saw human civilization beginning only 11,000 years ago. So, the modern climate change we see is big, really big; even by standards of Earth history.”

Learning from Earth’s past to understand the future

Building on previous research at PIK, the researchers reproduced the main features of natural climate variability over the last few million years with an efficient numerical model – a computer simulation based on astronomical and geological data and algorithms representing the physics and chemistry of our planet. The simulation was driven only by well-known changes in the ways the Earth circles the sun, the so-called orbital cycles, and different scenarios for slowly varying boundary conditions, namely CO2 outgassing from volcanoes. The study also lookedt into changes in sediment distribution of the Earth surface, since ice sheets slide more easily on gravel than on bedrock. It has also accounted for the role of atmospheric dust, which makes the ice surface darker and thereby contributes to melting.

“The fact that the model can reproduce the main features of the observed climate history gives us confidence in our general understanding of how the climate system works,” says co-author Andrey Ganopolski, author of several previous groundbreaking studies the new analysis now builds upon. “The simulations we develop have to be simple enough to allow for thousands of calculation runs of many thousands of years, and yet have to capture the critical factors that drive our climate. This is what we have achieved. And it is confirming how outstandingly important changes in CO2 levels are for Earth’s climate.” 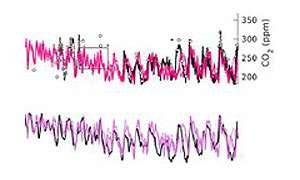