Solar panels require a lot of space, so why not use the space which is abundant in large bodies of water to produce environmentally-friendly electricity? The main obstacle to this is waves, which endanger large floating installations on the water. A new lightweight construction has been developed at TU Wien which can be used to build platforms spanning one hundred metres long which remain steady and firmly in place – even in rough sea weather.

Stable in rough weather
“The key to this, is that Heliofloat is supported by open floatation devices,” explains Prof. Markus Haider, from the Institute for Energy Systems and Thermodynamics. “Were a platform to be simply mounted onto air-filled, closed containers, the design of the construction would have to be inefficiently heavy and robust in order to be able to withstand heavy waves.”

The Heliofloat buoyancy units, however, are analogous to downward-facing barrels made from a soft, flexible material that floats on water. The upper section contains air that cannot escape, which enables the barrel to float; however, the air has direct contact with the water below. There is no closed air cushion, but rather an air column over the water which acts as a shock absorber. The flexible side walls of the ‘barrels’ only absorb small, horizontal forces.

Heliofloat is supported by several of these downward-facing open air tanks, stationed below a large, even floor space. When the air tanks are correctly dimensioned, the waves rise and fall under the Heliofloat without making any significant impact on the platform, allowing the construction to float steadily just above the water. Such a construction would be impossible using closed and rigid air cushions, as these would absorb the wave energy to a much greater extent, causing the platform to sway wildly and eventually break.

Solar energy and much more
This new construction allows areas the size of football fields to be made available on the water with ease. The research team at TU Wien has developed concepts for harnessing the sun over the water using photovoltaics and parabolically shaped mirrored troughs, with many further possible applications are also being considered. “Heliofloat platforms offer new possibilities for desalination plants and biomass extraction processes for salt water,” affirms Dr Roland Eisl, a TU Wien alumnus and Director of Heliofloat GmbH. “In hot countries, Heliofloat platforms could be utilised to protect lakes against drying up.” Although the evaporation surface becomes smaller, Heliofloat platforms allow sunlight to penetrate through to the water, ensuring the aquatic ecosystem is not negatively impacted. Heliofloat could also be deployed in aquafarming applications, or even in the construction of sports facilities. And perhaps one day, residential homes will be built on water too. 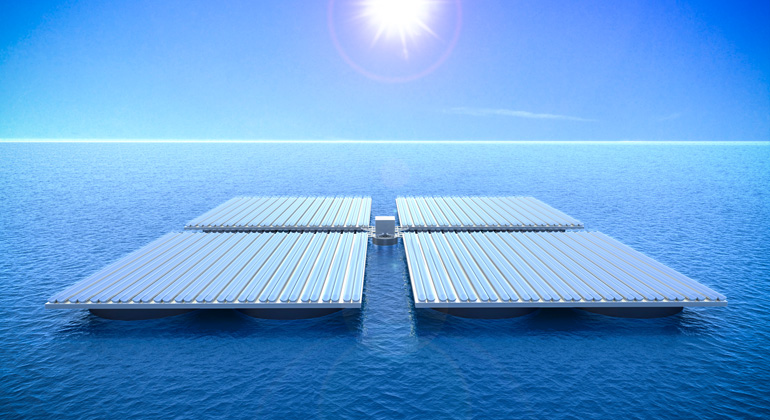