This success stems from French-German cooperation between Soitec, CEA-Leti and the Fraunhofer ISE and confirms competitive advantage of European photovoltaic industry

A new world record for the direct conversion of sunlight into electricity has been established. The record multi-junction solar cell converts 46 % of the solar light into electrical energy and was developed by Soitec and CEA-Leti, France, together with the Fraunhofer Institute for Solar Energy Systems ISE, Germany. Multi-junction cells are used in concentrator photovoltaic (CPV) systems to produce low-cost electricity in photovoltaic power plants, in regions with a large amount of direct solar radiation. The achievement of a new world record one year after the one previously announced in September, 2013 by these French and German partners shows the strong competitiveness of the European photovoltaic research and industry.

Multi-junction solar cells are based on a selection of III-V compound semiconductor materials. The world record cell is a four-junction cell, and each of its sub-cells converts precisely one quarter of the incoming photons in the wavelength range between 300 and 1750 nm into electricity. When applied in concentrator PV, a very small cell is used with a Fresnel lens, which concentrates the sunlight onto the cell. The new record 46.0% efficiency was measured at a concentration of 508 suns and has been confirmed by the Japanese AIST (National Institute of Advanced Industrial Science and Technology), one of the leading centers for independent verification of solar cell performance results under standard-testing conditions.

A special challenge that had to be met by this cell is the exact distribution of the photons among the four sub-cells. This has been achieved by precise tuning of the composition and thicknesses of each layer inside the cell structure. “This is a major milestone for our French-German collaboration. We are extremely pleased to hear that our result of 46% efficiency has now been independently confirmed by AIST in Japan”, explains Dr. Frank Dimroth, project manager for the cell development at the German Fraunhofer Institute for Solar Energy Systems ISE. “CPV is the most efficient solar technology today and suitable for all countries with high direct normal irradiance.”

Jocelyne Wasselin, Vice President Solar Cell Product Development for Soitec, a company headquartered in France and a world leader in high performance semiconductor materials, says: “we are very proud of this new world record. It confirms we made the right technology choice when we decided to develop this four-junction solar cell, and clearly indicates that we can demonstrate a 50% efficiency in the near future”. She adds: “To produce this new generation of solar cells, we have already installed a line in France. It uses our bonding and layer-transfer technologies and already employs more than 25 engineers and technicians. I have no doubt that this successful cooperation with our French and German partners will drive further increase of CPV technology efficiency and competitiveness.” 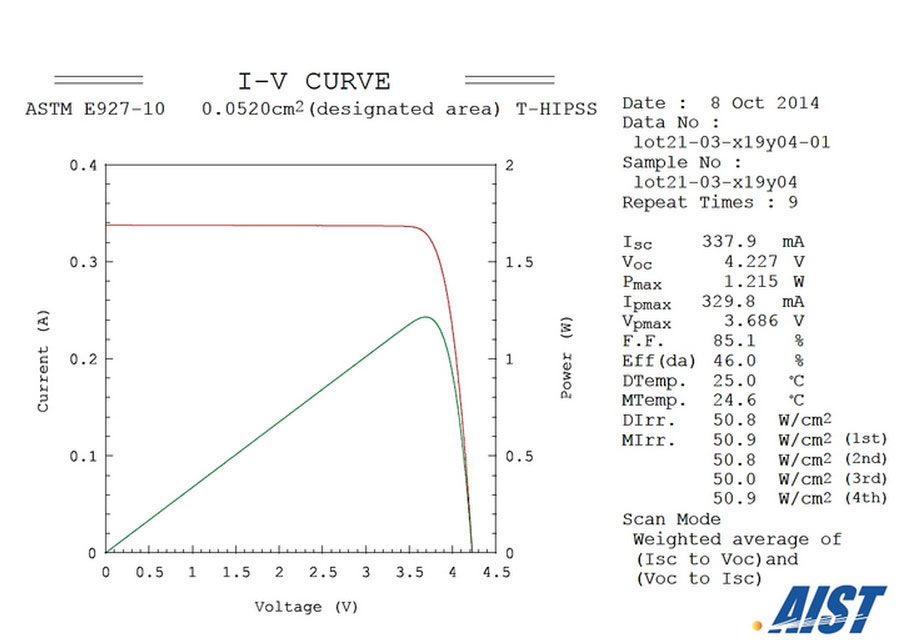