A new analysis shows the world’s oceans were the warmest in 2019 than any other time in recorded human history, especially between the surface and a depth of 2,000 meters.

The study, conducted by an international team of 14 scientists from 11 institutes across the world, also concludes that the past ten years have been the warmest on record for global ocean temperatures, with the past five years holding the highest record.

The authors published their results on Jan. 13 in Advances in Atmospheric Sciences, with a call to action for humans to reverse climate change. In the face of such disastrous effects as the 17.9 million acres Australian bushfire, which has resulted in 24 deaths and thousands of homes destroyed so far, the researchers report that global ocean temperature is not only increasing, but it’s speeding up.

“That’s a lot of zeros indeed. To make it easier to understand, I did a calculation. The Hiroshima atom-bomb exploded with an energy of about 63,000,000,000,000 Joules. The amount of heat we have put in the world’s oceans in the past 25 years equals to 3.6 billion Hiroshima atom-bomb explosions,” said CHENG Lijing, lead paper author and associate professor with the International Center for Climate and Environmental Sciences at the Institute of Atmospheric Physics (IAP) of the Chinese Academy of Sciences (CAS). CHENG is also affiliated with CAS’s Center for Ocean Mega-Science. “This measured ocean warming is irrefutable and is further proof of global warming. There are no reasonable alternatives aside from the human emissions of heat trapping gases to explain this heating.”

The researchers used a relatively new method of analysis from IAP to account for potentially sparse data and time discrepancies in instruments that were previously used to measure ocean warmth specially from the ocean surface to 2,000 meters deep. The newly available data allowed the researchers to examine warmth trends dating back to the 1950s. This study also includes ocean temperature changes recorded by the National Oceanic and Atmospheric Administration (NOAA) in the United States. The two independent data sets indicate that the past five years have been the warmest on record for global ocean temperatures.

The researchers also compared the 1987 to 2019 data recording period with the 1955 to 1986 period. They found that over the past six decades, the more recent warming was ~450% that of the earlier warming, reflecting a major increase in the rate of global climate change.

“It is critical to understand how fast things are changing,” said John ABRAHAM, co-author and professor of mechanical engineering at the University of St. Thomas in the United States. “The key to answering this question is in the oceans — that’s where the vast majority of heat ends up. If you want to understand global warming, you have to measure ocean warming.”

2019 broke the previous records set in prior years for global warming, and the effects are already appearing in the form of more extreme weather, rising sea levels and harm to ocean animals.

“Global warming is real, and it’s getting worse,” Abraham said. “And this is just the tip of the iceberg for what is to come. Fortunately, we can do something about it: We can use energy more wisely and we can diversify our energy sources. We have the power to reduce this problem.”

According to the researchers, humans can work to reverse their effect on the climate, but the ocean will take longer to respond than atmospheric and land environments. Since 1970, more than 90% of global warming heat went into the ocean, while less than 4% of the heat warmed the atmosphere and land where humans live.

“Even with that small fraction affecting the atmosphere and land, the global heating has led to an increase in catastrophic fires in the Amazon, California and Australia in 2019, and we’re seeing that continue into 2020,” CHENG said. “The global ocean warming has caused marine heat waves in Tasman Sea and other regions.”

One such marine heat wave in the North Pacific, dubbed “the blob,” was first detected in 2013 and continued through 2015.

“The blob is documented to have caused major loss of marine life, from phytoplankton to zooplankton to fish – including a 100 million cod – to marine animals, such as whales,” said Kevin TREMBERTH, co-author and distinguished senior scientist at the National Center for Atmospheric Research in the United States. “These manifestations of global warming have major consequences.”

Trenberth also noted that a hot spot in the Gulf of Mexico in 2017 spawned Hurricane Harvey, which led to 82 deaths and caused about $108 billion in damages according to the Rice Kinder Institute for Urban Research. The following year, a hotspot in the Atlantic Ocean near the Carolinas led to Hurricane Florence. According to Moody’s Analytics, an economic research organization, the storm caused 53 deaths and between $38 and $50 billion in economic damage.

“The price we pay is the reduction of ocean-dissolved oxygen, the harmed marine lives, strengthening storms and reduced fisheries and ocean-related economies,” Cheng said. “However, the more we reduce greenhouse gasses, the less the ocean will warm. Reduce, reuse and recycle and transferring to a clean energy society are still the major way forward.”

Next, the researchers are examining how warming impacts oceans beyond temperature. They plan to study how water temperatures affect the water’s buoyancy, which directly affects the distribution of nutrients and heat. 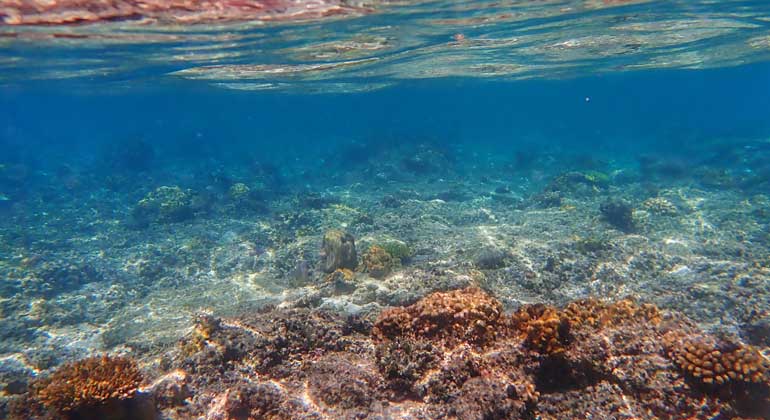 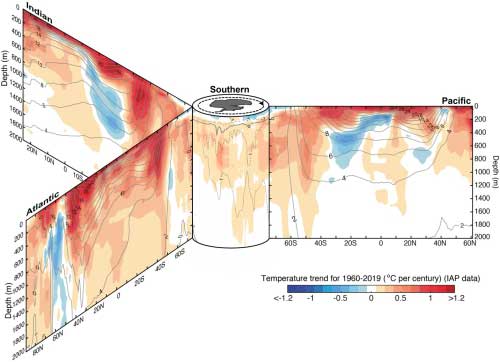 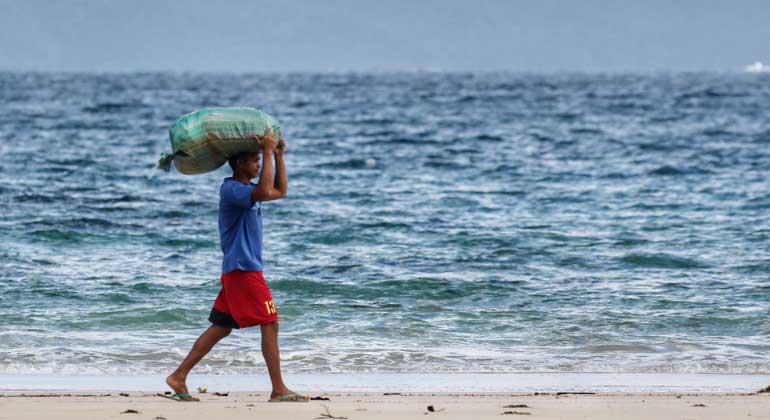