Tabular icebergs can drift through the Southern Ocean for eight years or more, and predominantly melt at the bottom.

When, in the foreseeable future, a tabular iceberg nearly seven times the size of Berlin breaks off the Larsen C Ice Shelf in the Antarctic, it will begin a journey, the course of which climate researchers at the Alfred Wegener Institute, Helmholtz Centre for Polar and Marine Research can accurately predict. The researchers have now succeeded in modelling how Antarctic icebergs drift through the Southern Ocean, and in identifying the physical factors behind their movement and their melting. Which factors are most important tends to depend on the size of the iceberg in question. Their findings were recently released on the online portal of the Journal of Geophysical Research: Oceans.

Polar researchers around the globe are currently watching the Antarctic Peninsula with bated breath. On the Larsen C Ice Shelf, a massive iceberg has begun to break off from the rest. The future iceberg will be roughly 175 kilometres long, and will measure 50 kilometres across at its widest point. As such, it will have a total surface area of nearly 6,000 km2, making it seven times the size of the greater Berlin metropolitan area. Further, at ca. 1,300 gigatonnes, the colossus will weigh nearly as much as all of the new icebergs formed in the Antarctic in the course of an average year.

It is virtually impossible to predict exactly when ice masses of this size will calve. However, climate researchers at the Alfred Wegener Institute can now better predict how small, medium-sized, and large icebergs will drift through the Southern Ocean once they have broken off from their ice shelf, and which physical factors are responsible for their movements – these factors can vary greatly, depending on their size.

Winds blow the dwarfs out to the open sea, while the giants remain near the coast

“Icebergs that aren’t longer or wider than two kilometres normally drift away from the ice shelf edge and out of coastal waters within a few months. The wind pushes them out to the open sea, where they ultimately break up into smaller pieces and melt in the course of two to three years,” explains Thomas Rackow, a climate modeller at the Alfred Wegener Institute in Bremerhaven and first author of the new study.

When it comes to mammoths on the scale of the Larsen C candidate, the wind is largely irrelevant. Instead, the icebergs’ motion is chiefly driven by their own weight, and by the fact that the surface of the Southern Ocean is not flat, but instead leans typically to the north. As a result, sea level can be up to 0.5 metres higher on the southern edge of the Weddell Sea or along the Antarctic Peninsula than at its centre. As Rackow elaborates, “When large icebergs drift, they initially slide down the inclined ocean surface, but not along a straight line; they tend to veer to the left. This is due to the Coriolis force, which is a consequence of the Earth’s rotation and ultimately puts the icebergs on a course parallel to the coast, one similar to the Antarctic Coastal Current.”

Heading north – on one of four highways

The deflecting effect of the Coriolis force also explains why large tabular icebergs linger near the coast for the first three or four years. Many only make their way to the open sea once the Antarctic Coastal Current leads them away from the coast – or once they become trapped in pack ice, and the wind drives pack ice and iceberg collectively away from the coast. “In this way, even the large tabular icebergs end up in more northerly ocean regions with warmer water,” says Rackow.

Once in warmer waters, especially the tabular icebergs start to melt at the bottom and, depending on their point of origin, follow one of the four “highways” that transport all floating ice in the Antarctic northwards. One of these iceberg highways follows the eastern coast of the Antarctic Peninsula, leading from the Weddell Sea toward the Atlantic. There is a second “exit” at the Prime Meridian, on the eastern edge of the Weddell Sea – at roughly the same point where Germany’s Antarctic research station Neumayer III is located on the Ekström Ice Shelf. The third exit is at the Kerguelen Plateau in the eastern Antarctic, while the fourth leads the ice northwards from the Ross Sea (see graphic).

Once they have begun their journey north, some large icebergs make it as far as the 60th parallel south, covering thousands of kilometres before they disappear. Some have even been sighted off the coasts of South America and New Zealand.

How far the future Larsen C iceberg will drift depends on whether it remains intact after calving, or quickly breaks up into smaller pieces. Further, the iceberg may run aground for a time. According to Rackow, “If it doesn’t break up, chances are good that it will first drift for about a year through the Weddell Sea, along the coast of the Antarctic Peninsula. Then it will most likely follow a northeasterly course, heading roughly for South Georgia and the South Sandwich Islands.”

Given its massive weight, the Larsen C iceberg will likely survive for eight to ten years; according to the computer model, that’s the maximum life expectancy for even the largest “white wanderers”.

For the new study, Thomas Rackow and his colleagues fed actual position and size data of 6,912 Antarctic icebergs into the Finite Element Sea Ice-Ocean Model FESOM, which they combined with a dynamic-thermodynamic iceberg model (both of which were developed at the AWI). The researchers subsequently simulated how the icebergs would drift and melt over a twelve-year timespan. The potential routes produced by the model were then compared with actual data on large icebergs from the Antarctic Iceberg Tracking Database, and with positioning data from GPS transmitters that the AWI had installed on various icebergs in the Weddell Sea in the years 2000 and 2002.

“The primary goal of our study was to understand in which region of the Southern Ocean the large icebergs melt, adding massive quantities of freshwater in the process. The fact that we have now also succeeded in unravelling the fundamental mechanisms so thoroughly is a wonderful extra bonus,” Rackow concludes. 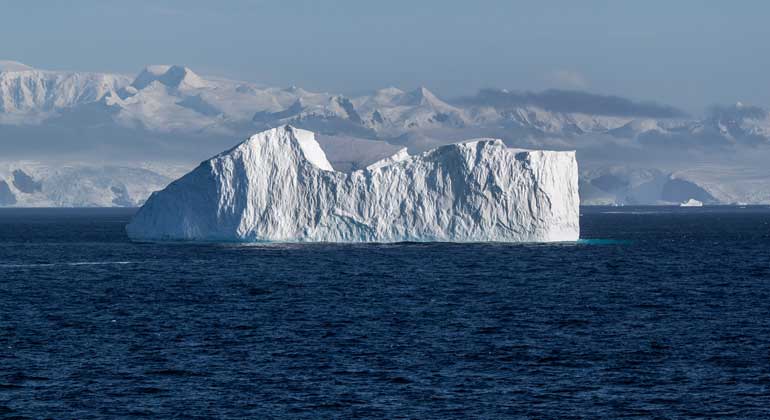 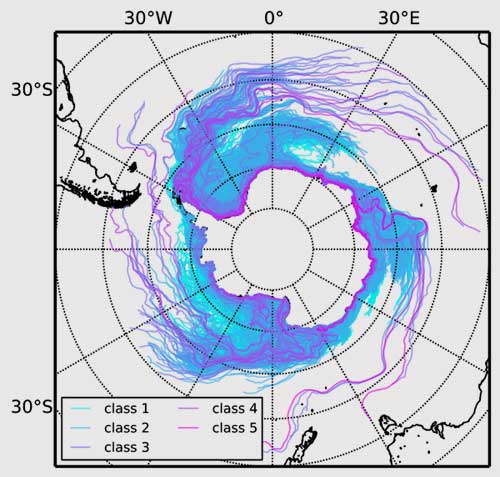