As carbon dioxide (CO2) levels in the atmosphere rise, more CO2 gets absorbed into seawater. As a result, the world’s oceans have grown more acidic over time, causing a wide range of well-documented problems for marine animals and ecosystems. Now, researchers reporting in Current Biology on January 11 present some of the first evidence that similar things are happening in freshwaters too.

Studies on ocean acidification have shown that there are consequences for marine food webs, nutrient cycles, overall productivity, and biodiversity. Yet, the researchers say, surprisingly little has been known about the impact of rising atmospheric CO2 on freshwater systems. While scientists expected that there had been increased pCO2 in freshwater bodies, the data were lacking.

To investigate, Weiss and colleagues looked to four freshwater reservoirs in Germany. Their analysis of data over 35 years, from 1981 to 2015, confirmed a continuous pCO2 increase. As in the ocean, that increase has been associated with a decrease in pH (increasing acidity). In fact, they report a change in pH of about 0.3 within 35 years, suggesting that freshwaters may acidify at a faster rate than the oceans.

But what effect was that increasing pCO2 having on freshwater organisms? To begin to explore that question, the researchers focused their attention on small, freshwater crustaceans called Daphnia, also known as water fleas. Daphnia are a dominant species in many lakes, ponds, and reservoirs, and they are important as a primary food source for many larger animals.

When Daphnia sense that predators are around, they respond by producing helmets and spikes that make them harder to eat. Weiss’ team found in the lab that rising pCO2 levels get in the way of the water fleas’ ability to produce those protective features.

“High levels of CO2 reduce the Daphnia’s ability to detect their predator,” Weiss says. “This reduces the expression of morphological defenses, rendering them more vulnerable.” She adds that such effects on Daphnia may have broader effects on freshwater communities.

Weiss says they were fortunate to obtain such a long data series on four freshwater reservoirs. It will now be important to gather more data representing freshwater impoundments around the world.

“We now want to know the global degree of this phenomenon,” Weiss says. The question is: “Are all freshwater impoundments prone to this kind of acidification?” 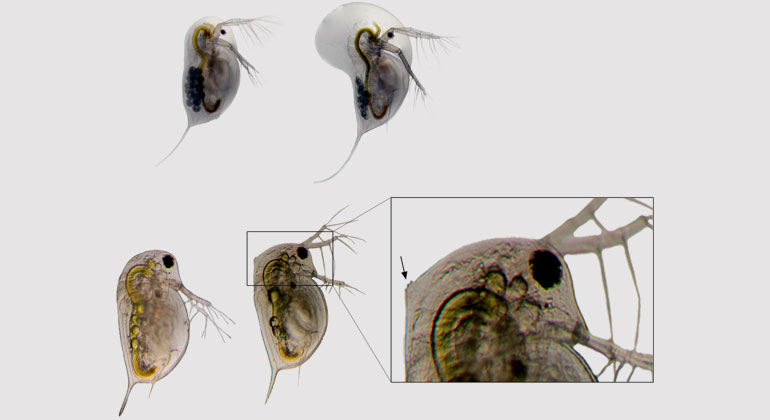