With the increased significance of lithium-ion batteries, the pressure on the availabiltity of relevant ressources rises.

Lithium and cobalt are fundamental components of present lithium-ion batteries. Analysis by researchers at the Helmholtz Institute Ulm (HIU) of the Karlsruhe Institute of Technology (KIT) shows that the availability of both elements could become seriously critical. Cobalt-free battery technologies, including post-lithium technologies based on non-critical elements such as sodium, but also magnesium, zinc, calcium and aluminium, represent possibilities to decrease the dependency and avoid the criticality of lithium and Co. supplies in the long term. The researchers present these results in the journal Nature Reviews Materials.

Besides lithium as charge carrier, cobalt is a fundamental component of the cathode in present lithium-ion batteries (LIBs), determining the high energy and power density as well as the long lifetime. However, as outlined in the article by Dr. Christoph Vaalma et al., this element is suffering from scarcity and toxicity issues. “In general, the rapidly growing market penetration of LIBs for electromobility applications, such as fully electric cars, will lead to an increasing demand for raw materials, especially with respect to lithium and cobalt”, says Professor Stefano Passerini, who supervised the study together with Dr. Daniel Buchholz at the Helmholtz Institute Ulm.

Their scenario-based analysis until 2050 for various applications of batteries shows that the shortage and price increase of cobalt are likely to occur, since the cobalt demand by batteries might be twice as high as the today’s identified reserves. In contrast, today’s identified lithium reserves are expected to be much less strained, but the production will have to be strongly upscaled (possibly more than ten times, depending on the scenario) to match the future demand. However, both elements additionally suffer from strong geographical concentration, moreover in countries which are reported to be less politically stable. According to the researchers, this gives rise to strong concerns about a possible shortage and associated price increase of LIBs in the near future. “It is therefore indispensable to expand the research activities towards alternative battery technologies in order to decrease these risks and reduce the pressure on cobalt and lithium reserves”, says Daniel Buchholz. Stefano Passerini, HIU deputy director, emphasises: “Post-lithium systems are especially appealing for electromobility and stationary applications. This is why it is both very important and urgent to unlock their potential and develop these innovative, high-energy batteries towards market maturity“.

These results are further confirmed by the global scenario for battery applications in the field of electromobility until the year 2050, recently developed at HIU and published as book chapter. “The future availability of cobalt for the mass production of LIBs has to be classified as very critical, which is also evident from the price increase of cobalt higher than 120% within one year (2016-2017)“, HIU system analyst Dr. Marcel Weil points out. In addition, the establishment of a battery economy with a high rate of recycling would certainly be imperative to decrease the pressure on critical materials.

Both studies highlight the importance of new battery technologies based on low-cost, abundant and, at best, non-toxic elements, demonstrating the importance of their further development in order to decrease the pressure on critical resources. To address this need, KIT and University of Ulm joined their efforts in the proposal for a Cluster of Excellence Energy Storage Beyond Lithium: New Storage Concepts For A Sustainable Future, focusing on the development of sodium-ion, magnesium-ion and other batteries based on abundant materials. The Centre for Solar Energy and Hydrogen Research Baden-Württemberg (ZSW) and the Justus-Liebig University Gießen are also involved in these efforts. 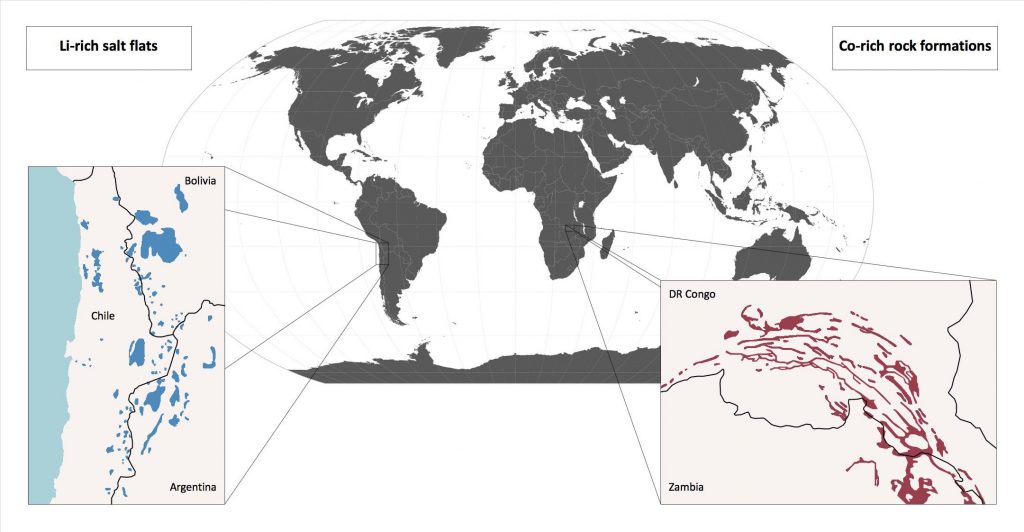