In addition to warming and acidification of seawater, the loss of oxygen in the ocean increasingly leads to a shift in the biological, chemical and physical equilibrium of our oceans.

This result was presented in the 562-page report of the Interna-tional Union for Conservation of Nature (IUCN) at the UN Climate Change Conference in Madrid on 7 December, with contributions by scientists from GEOMAR Helmholtz Centre for Ocean Research Kiel.

No life without oxygen – even in the ocean. And in many areas oxygen is continuously decreasing and thus increasingly limiting the habitats for marine organisms. This can then have fatal consequences for fishing and related industries. Since the loss of oxygen is largely driven by global warming, the report by the International Union for Conservation of Nature (IUCN) represents a further “wake-up call” to the participants of the World Climate Conference in Madrid.

In addition to global warming, the IUCN report also identifies other reasons for oxygen reductions. These include eutrophication of coastal waters and changes in ocean circulation. “Nevertheless, global warming is a major contribution, water because warmer water stores less oxygen and hence can transport less oxygen from the surface to the deeper layers of the ocean”, explains Dr. Lothar Stramma, oceanographer at GEOMAR Helmholtz Centre for Ocean Research Kiel. Scientists from GEOMAR have contributed with their results to this report. They carried out their research within the framework of the Collaborative Research Centre (SFB) 754 “Climate-Biogeochemical Interactions in the Tropical Ocean” funded by the German Research Foundation (DFG). In one of the studies within SFB754, the oceanographer Dr. Sunke Schmidtko was able to prove that the global oxygen content has decreased by more than two percent over the past 50 years.

The IUCN report also clearly shows that oxygen loss varies substantially from region to region. While there are areas in the ocean in which the oxygen content hardly changes, the development in others is much clearer. This is particularly true for coastal waters, where for example over-fertilization by fertilizers and fish farms promotes algae growth and increases oxygen consumption. “Considering that coastal areas such as Peru or West Africa are responsible for a large part of the worldwide fishing yields, this can already have a direct impact on humans”, emphasizes Prof. Dr. Andreas Oschlies, speaker of the SFB 754 from GEOMAR.

One year ago, participants of an international conference organized by the SFB754 issued the “Kiel Declaration on Ocean Deoxygenation” to draw attention to the global loss of oxygen in the ocean and called to tackle its causes. However, the project, which is now coming to an end, has not yet been able to answer all the questions on this subject. “For example, computer models still show a smaller oxygen loss than we actually measure in the ocean. This means that we have not yet understood all the related processes”, emphasizes Prof. Andreas Oschlies. “Therefore we are pleased that the IUCN is taking up this topic with its new report and pointing out new avenues for future research”.

The Collaborative Research Centre 754 (SFB 754) “Climate and Biogeochemical Interactions in the Tropical Ocean” was established in January 2008 as cooperation between Kiel University and the GEOMAR Helmholtz Centre for Ocean Research Kiel. The SFB 754 investigates changes in ocean oxygen content, their potential impact on oxygen minimum zones and the consequences for the global interaction of the climate and biogeochemistry of the tropical ocean. The SFB 754 is funded by the German Research Foundation (DFG) and is in its third phase (2016-2019). 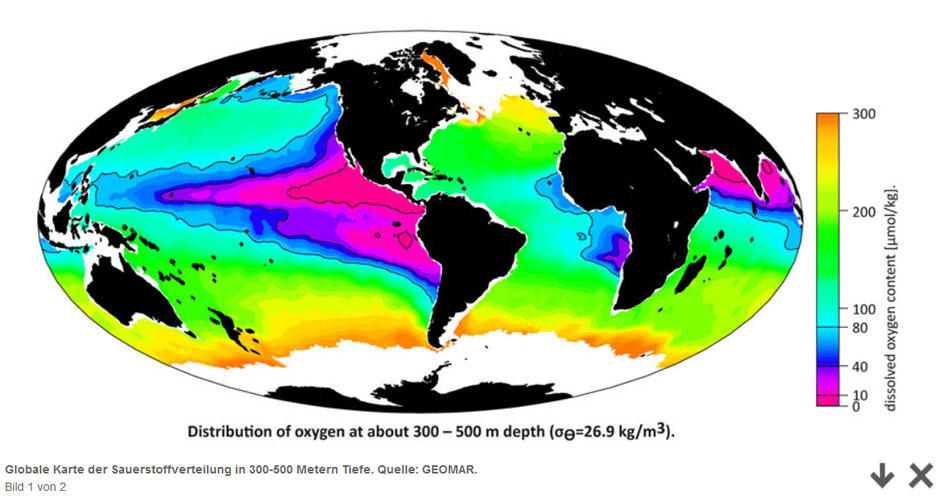