Biologists analyze data of long-term experiment to monitor and predict how plant species will respond to climate change.

Plant Ecology researchers at the University of Tübingen have developed a technique to monitor and predict how plant species will respond to climate change. Dr. Mark Bilton and Professor Katja Tielbörger, from the Institute of Evolution and Ecology, reanalysed data with Spanish collaborators from their unprecedented 16-year experiment. The experiment was conducted in an area the size of two football pitches within the Garraf National park south west of Barcelona. The landscape is mostly a Mediterranean scrubland, featuring thickets of low rise shrubs and herbs such as rosemary and thyme, and home to many protected species.

Using large automatic shelters, climate for the plants living in their natural environment was changed in order to match climate conditions predicted in the future, separately by decreasing rainfall and by raising temperatures. However, until now, it was unclear how the different species of plants were responding to changed climate, making it difficult to make further predictions about which species may be most affected in the future. The results of the study were published in the New Phytologist.

In general, global warming and reduced precipitation may lead to large-scale species losses and vegetation shifts in ecosystems around the world. Depending on whether plants are better adapted to warm and dry conditions or to cool and wet conditions, the response to a changed climate is likely to vary even within a region. In the study the scientists showed, that within a region, the relative rate and direction of plant response to a changed climate can be directly related to where and which climates the species occur in more frequently.

Therefore the researchers used a large online database containing the localities of where the different species in the experiment occurred all throughout southern Europe. These observations were combined with rainfall and temperature maps. This way the average temperature or rainfall requirements of the different co-occurring species in Spain could be used to rank them, based on which climates they are more commonly found. This ranking technique helped the scientists unlock the secrets behind which species were changing in the experiment, and monitor their changes over time.

In this particular experiment, the overall species diversity and vegetative biomass did initially respond negatively, but from 8 to 16 years the overall amount of vegetation was increasing again. Here the researchers showed that the initial decrease was due to a disappearance of the wet adapted species, followed by a delayed increase in the dry loving species. In addition, the novel ranking technique showed, that the species that declined under decreased rainfall, were different to those disappearing under increased temperatures.

By finding that responses were mainly related directly to where the species originally occur more frequently, separately for either rainfall or temperature, predictions can be extended to other future scenarios of climate change. “The technique is logical, but also surprisingly revealing”, says Dr. Mark Bilton, who has been using the same method to study plant responses in Israel. “It allows us to compare the rate of change of species within a habitat, but also between habitats”. Combining the ranking technique with the leading experimental approach to understanding climate change responses, the response of vegetation in other regions can be monitored and compared. “Within a region this can aid conservation efforts to identify those species likely to be lost most quickly. We are also confident it can help identify, which species and regions around the world may be more vulnerable to climate change in the future.” 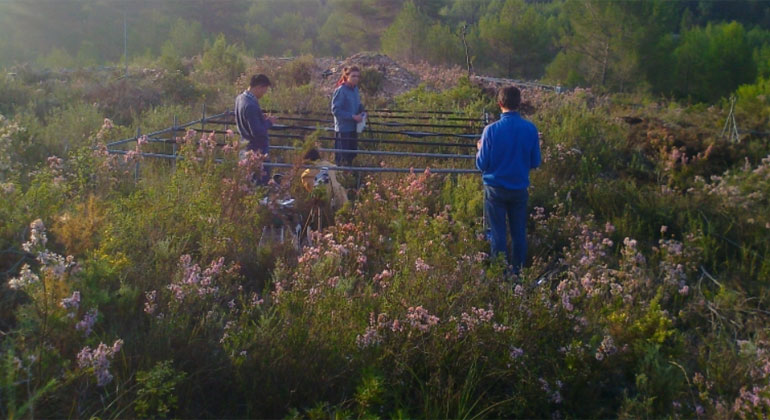