The researchers found out why, in near-bottom waters, lakes may even cool down despite warming at the surface, and what the consequences are for the production and emission of greenhouse gases.

A research team led by the University of Basel and the Université de Montréal examined how the ongoing climate warming affects the “behavior” of lakes. The researchers found out why, in near-bottom waters, lakes may even cool down despite warming at the surface, and what the consequences are for the production and emission of greenhouse gases. The results of the study were published in the most recent edition of the journal Limnology and Oceanography Letters.

Lakes play an important role in the global carbon cycle, acting as large natural bioreactors. The temperature of a lake represents an important constraint on the amount of carbon dioxide and methane it emits into the atmosphere. It was generally assumed that global warming stimulates microbial respiratory processes and the production of these greenhouse gases, while at the same time reducing the carbon storage in lake sediments. An international research team has now examined these interactions more closely and discovered unexpected effects.

The research project not only targeted the direct effects of global warming, but also the indirect ones. The main focus of the investigations was the water temperature and greenhouse gas production in the deeper parts of the lakes. “We don’t want to question the fundamentals of thermodynamics. There is no doubt that the rates of respiratory metabolic processes in lakes are generally higher at increased water temperatures,” explains Professor Moritz Lehmann from the Department of Environmental Sciences at the University of Basel. “However, climate change will not cause every lake to warm up everywhere.”

Lakes worldwide are warming at the surface. However, they are also losing transparency due to increased algae production and enhanced turbidity of the lake water. “The surface-water warming and the loss of transparency have the effect that more heat is trapped in the upper layers of the lakes, leaving the deeper waters thermally isolated,” says lead author Dr. Maciej Bartosiewicz from the Department of Environmental Sciences at the University of Basel. “Under some circumstances, this can even lead to the cooling of water masses near the bottom of the lake.”

The subtle cooling slows down respiratory decay processes and carbon dioxide production in the lakes, increasing carbon burial within the sediments. Model simulations suggest that the observed effects are most pertinent to relatively small and shallow lakes, which make up approximately half of the global lake surface.

The increased differential warming in lakes has yet another effect: the pronounced thermal stratification entails that the deeper water layers do barely mix and are poorly ventilated, which can lead to prolonged anoxia. Under these oxygen-free conditions, methane production by anaerobic microorganisms is enhanced.

“All in all, global warming increases the greenhouse gas potential of lakes, as expected. However, this has less to do with the warming directly, and more to do with increased oxygen depletion at the bottom of these lakes,” concludes Bartosiewicz.

The study was conducted in collaboration with the Université de Montreal and the Eau Terre Environnement Research Centre at the Institut National de la Recherche Scientifique in Quebec. 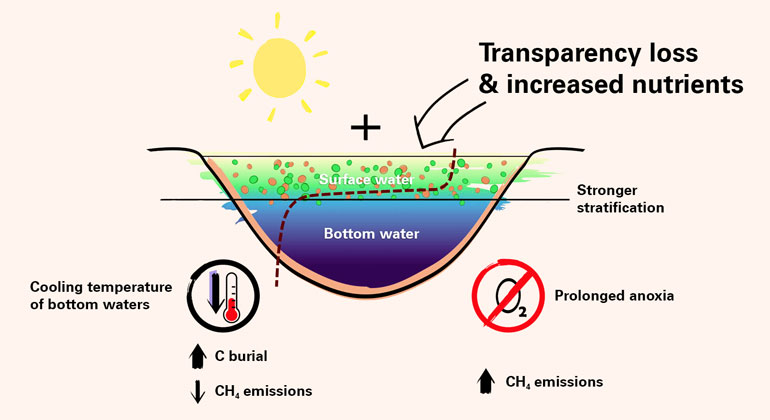