Clean water is a rare commodity in many countries in Central Asia. Mongolia is among those greatly struggling to keep their supplies of fresh water flowing.

Since 2006, Fraunhofer researchers have been working hard to establish a sustainable water management system in the Mongolian city of Darkhan and the surrounding area. Their efforts in the second-largest industrial region in the country – covered by thousands of acres of steppe and desert – are now proving to be a great success. Reducing leaks in the region’s water distribution network from 50 to 25 percent is just one of their accomplishments. A project is currently underway to install new pipelines, pump systems and waste water treatment plants.

Ensuring a supply of clean drinking water and the effective treatment of waste water poses a major challenge in Mongolia. On top of the outdated technical infrastructure, dilapidated pipelines and pump systems have caused living conditions in many regions of the country to deteriorate in recent years. Increasing industrialization and intensive mining and farming activities are polluting groundwater and rivers, and extreme seasonal variations in temperature make matters even worse. In a project known as MoMo, which stands for Integrated Water Resources Management for Central Asia: Model Region Mongolia, a team of natural and social scientists, engineers and partner companies have been working since 2006 to put sustainable measures in place for the protection of scant water resources. The Advanced System Technology Branch (AST) of Fraunhofer Institute of Optronics, System Technologies and Image Exploitation IOSB is coordinating the municipal water management component of the project – now in phase III. Germany’s Federal Ministry of Education and Research (BMBF) is backing Fraunhofer’s participation with funding to the tune of 2.9 million euros.

The model region selected for the researchers to study covers the catchment area of the river Kharaa and the city of Darkhan, where the team is monitoring environmental factors and installing innovative water management technologies. Darkhan is a typical Mongolian industrial city. It is home to some 100,000 inhabitants, approximately half of whom live in permanent housing while the other half live in yurts on the city’s outskirts. These yurt or “ger” settlements do not have their own supply of potable water. Instead, the inhabitants generally get their drinking water from water kiosks. The communities also lack proper sewage systems.

Dr. Buren Scharaw, project manager and scientist at Fraunhofer IOSB-AST, has been traveling to Mongolia on a regular basis since 2006, where he has been helping to establish a sustainable supply of drinking water. In phase I of the project, Scharaw, who is Mongolian by birth, used monitoring systems to demonstrate that over 50 percent of drinking water in the distribution network in Darkhan was being lost due to leaks. “Large volumes of drinking water were simply draining away into the ground. Given that temperatures drop significantly below freezing in the winter, the pipes are installed 4.5 to 5 meters deep underground. This makes it difficult to locate the leaks,” says Scharaw. Using Fraunhofer’s HydroDyn water management software, the scientists created a computer model of the distribution network and used it to simulate hydraulic flow behavior, flow velocities and water pressure. By visualizing the network in this way, they were able to gain an understanding of the process in areas for which they had no previous records. They employed a range of different methods, including data monitoring, volume and mass balancing as well as the comparison of physical and simulated values, to identify where the water was escaping. Using this information in conjunction with the sensors installed in the distribution network, Scharaw and his colleagues were able to track down the locations of the leaks, reduce the volume of lost drinking water from 50 to 25 percent and minimize operating costs as a result. “In phase III, we’re renewing the pipework and now that we can monitor their energy consumption, we’re working on optimizing the energy-intensive, decrepit pumps,” says the engineer. Given that groundwater is the only sustainable water supply in Mongolia, Scharaw and his team also analyzed and mapped the groundwater resources, including their volume and quality. “We have to monitor the groundwater continuously because contamination levels change all the time.”

In another project milestone, the urgently needed reconstruction of Darkhan’s dilapidated central water treatment plant has now begun, with partners from Germany among those involved in the task. Plans are also in place to construct 25 decentralized water treatment plants in Mongolia.

The yurt communities on the outskirts of Darkhan obtain their fresh water from three water kiosks. Previously these kiosks opened only on an hourly basis. An operator would turn the tap on and off again, selling clean drinking water to the locals – usually children who would come with water canisters to fill. “This setup was highly impractical, which is why we automated the kiosks. Now, the locals can come and fill up at any time at the simple push of a button. They pay for the water with prepaid top-up cards,” Scharaw explains.

But the biggest challenge of all for Scharaw is yet to come: Phase III of the MoMo project is scheduled to end on December 31, 2018. This is when the project partners’ involvement also comes to an end. After this date, all plants and equipment must be operated by local staff. “As things stand, they’re not qualified to do so. The staff still need to be trained to make sure the region can continue to supply drinking water and waste water services in the future too. It’s a mammoth task and responsibility lies with Fraunhofer to see it through,” says Scharaw. Afterwards, he plans to transfer the research results to similar neighboring regions and consequently establish a foothold in the environmental and water sectors in the Central Asian market. 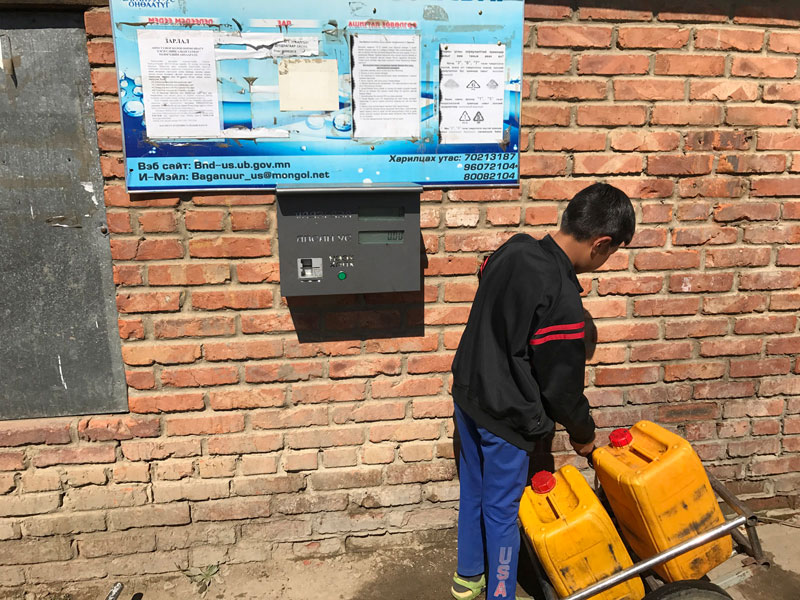