The Energy of the New Century – First-hand account of solar energy development by one of the pioneers in renewable energy – Presents interesting facts and anecdotes about renewables and conventional energy based on the author’s experience.

As the new century came, the world began to turn its back on the reckless developments of the past that resulted in global pollution and the deep misery it entails, a climate getting out of kilter, the threat of a nuclear war, and all perils brought about by the unchecked use of fossil and atomic resources. We have now resolutely begun to move to a life that believes in harmony with nature, with the Sun. Not only the climate but everyone is a winner going with the Sun, the celestial body that distinguishes itself with its constancy and bounties. Thanks to innovation and mass production, the power derived from the Sun now beats the conventional energy sector with its own strength: socio-economy. Solar energy has become cheaper than the energy harvested from conventional resources. The result is a booming economy that is not just sustainable, but is also capable of producing millions of new jobs.

In this book, Wolfgang Palz, an independent expert on energy matters and the economy, presents his views on a solar revolution to which he made significant contributions. It is not a compendium of ecological dreams and wishful thinking for a better world, but a thorough report, buttressed with facts and figures, on what happened. Beginning with fundamentals, the book discusses the key role of the Sun in nature and life. It details what happened when the search for a cleaner world began and elaborates the efforts of the people who brought about the change.

Wolfgang Palz is a German physicist. For more than half a century, he has been a global leader of the development of solar energy and other renewables. As an official of the European Commission in Brussels, he was the manager of PV development in Europe for 20 years. From 2000 to 2002, he was a member of an “Enquête Commission” of the German Parliament on the German energy perspective on the horizon 2050. Later, he was a consultant for the EU Commission on PV programmes for the poor in Latin America. Dr. Palz has received numerous awards, including the International Solar Energy Society (ISES) Global Leadership Award in Advancing Solar Energy Policy (2011). He is a bearer of an Order of Merit of the German Republic. 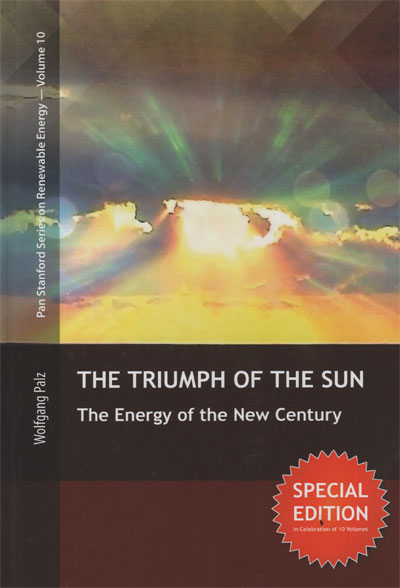