Top 35 companies are highly concentrated in a small number of countries that have a disproportionate share of global meat and dairy production and consumption.

What do Smithfield, Tyson and Cargill have in common? Besides being three of the largest meat producers in the United States and the world, each of them has committed to reducing its climate footprint. But are they? Who is monitoring these companies to hold them accountable?

Today, IATP and GRAIN jointly published a first of its kind study that quantifies emissions from 35 of the world’s largest meat and dairy companies and scrutinizes their climate plans. What do these companies intent to do to reduce their share of emissions for the world to avoid climate catastrophe?

The short answer: These companies are pursuing growth strategies that will actually increase their emissions.

Our research shows that:

As dire as these findings may sound, the solution is reachable with citizen action. Our report identifies the handful of governments that must be held accountable to take concrete and effective action on the industry’s climate impacts in the next few years to help us achieve the Paris Agreement goals of limiting global warming to less than 1.5 degrees Celsius. The indirect subsidies the industry receives through governments footing the bill for their air, water and land pollution, public health impacts from antibiotics overuse and biodiversity loss can and must be stopped. Moreover, taxpayer funds that go toward methane digestors, clean-up of their operations and sustaining below the cost of production grain prices could instead be channeled toward creating an agroecological transition of our food system where farmers, consumers and the planet all benefit.

The climate community’s attention has been focused on fossil fuel companies. It is time we broadened our focus to include the meat and dairy majors. In the next ten years, we must work together to build a just transition of our agricultural economy that helps restore rural communities and our soil, and sustain our planet. 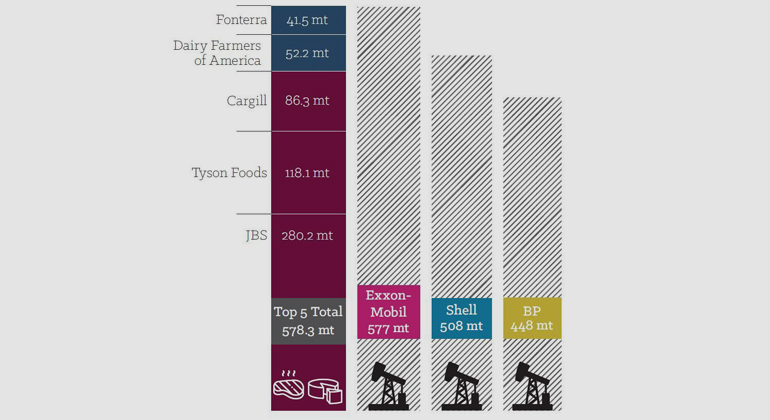