Plans for developing additional capacity have declined even further. Nearly  70% (1,141) of the companies currently have no active plans for new power capacity, either in the pre-construction or the construction stage.

In additional to CoalSwarm’s survey of coal plant owners, a survey of political entities carried out by CoalSwarm and Greenpeace has identified 5 countries, provinces, states, and cities that have already phased out coal power, and another 18 planning a coal power phase-out by 2030 or sooner.

The findings of the ownership and political entity surveys coincide with other research reporting a shift away from investments in coal. This includes a survey by the UN Environmental Program showing overall coal- and gas-fired generation investments globally falling to less than half of non-hydro renewable investments.

Globally, the International Energy Agency’s World Energy Investment 2017 report found investments in coal power down by 20% and poised to decline further, with money flowing increasingly toward lower-cost solar, wind, and natural gas. A study by industry tracker Prequin found that investment in coal mining and coal power by private funds in North America “has completely dried up.”

According to a recent Institute for Energy Economics and Financial Analysis (IEEFA) report, the ability of renewables to outbid coal caused underperforming utilities to incur US$185 billion in lost revenues from 2007 to 2016.

For governments, coal phase-out plans have come in response to concerns over misallocation of resources in the wake of coal power overcapacity and falling utilization rates; public outcries over high levels of air pollution, especially in major Chinese and Indian cities; and growing pressure across civil society for decisive action on climate change.

As of July 2017 the Global Coal Plant Tracker showed 548 gigawatts (GW) of coal power capacity in pre-construction planning and 264 GW under construction, a decline of 41% and 25% respectively from the levels reported in July 2016. These declines continue the trend documented in the CoalSwarm/Greenpeace/Sierra Club report Boom and Bust 2017 which reported a 48% percent decline in overall pre-construction activity, a 62% decline in new constructions starts, and an 85% decline in new Chinese coal plant permits during calendar year 2016.

Graphic: Source: CoalSwarm, Global Coal Plant Tracker Created with Datawrapper | (“Announced” is the most preliminary stage; “pre-permit” refers to projects moving forward in securing permits or funding; and “permitted” refers to plants cleared for construction. Click here for a more detailed description of the status categories.) 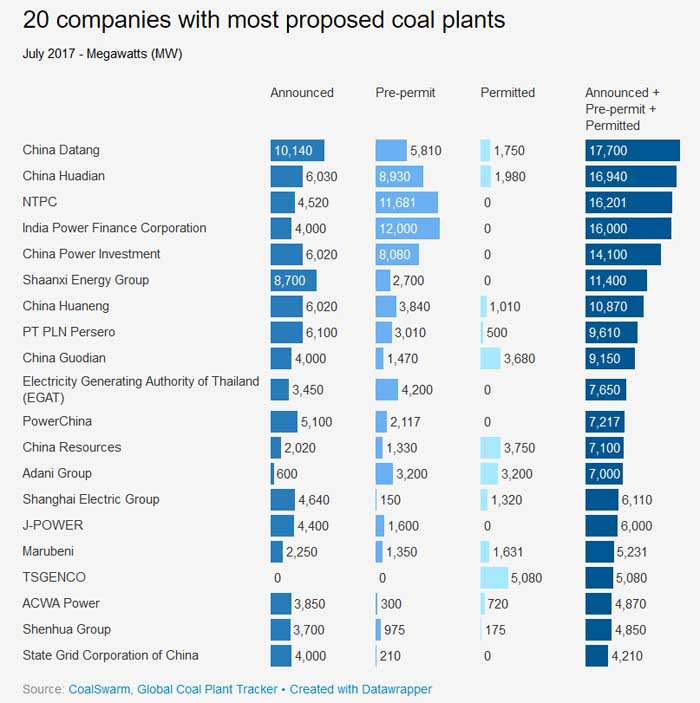