SolarPower Europe presented its latest solar market data at the SolarPower Summit, which illustrated a very successful 2017 for the industry. Global solar power additions increased by 29.3% to 98.9 GW in 2017, in comparison to 76.5 GW in 2016. The European solar market grew at nearly the same growth rate, increasing by 28.4% to 8.6 GW in 2017, up from 6.7 GW of newly installed capacity the year before.

Christian Westermeier, President of SolarPower Europe commented: “It is good to see European solar growing again, and it is particularly encouraging that this increase is at about the same level as the global market. Yet the EU has a lot of work to do if it wants to keep pace with the rest of the world on solar energy – and therefore we hope that the EU will agree to a 35% Renewables target in the Clean Energy package”.

“After an astonishing 50% growth in 2016, many solar experts did not expect any growth in 2017,” said Michael Schmela, Executive Advisor and Head of Market Intelligence at SolarPower Europe. “The fact that we saw solar continue to grow at such a high rate despite these analyses proves that solar has been constantly underestimated. The solar revolution is unstoppable and happening much faster than anticipated.”

James Watson, CEO of SolarPower Europe, said: “Solar’s continued growth is great news as we move the global energy transition forward – but Europe is at risk of being left behind. The EU must ensure that it addresses obstacles to solar’s potential, such as barriers to self-consumption and it must ensure a strong framework for small scale solar. The EU must support policies that encourage more solar installations, such as the removal of trade barriers on solar panels. Not only will this ensure a clean energy future for the EU, but it will boost local development, it is expected that solar will provide over 40,000 more jobs in Europe by 2019 if the trade barriers are removed.”

This solar installation data for Europe are first estimates from SolarPower Europe for 2017 solar power on-grid installations and are based on official data from government agencies whenever possible. If such information was not available from primary sources, SolarPower Europe has gathered data mostly through its members, comprising national solar associations. As complete data for 2017 is often not yet completely available or will be updated by national entities responsible for solar statistics in the coming months, the actual installation numbers might differ from this first estimate.

The final 2017 numbers and a 5-year solar demand forecast will be published in SolarPower Europe’s ‘Global Market Outlook For Solar Power 2018 – 2022’, which will be launched at Intersolar Europe in Munich on 19 June 2018. 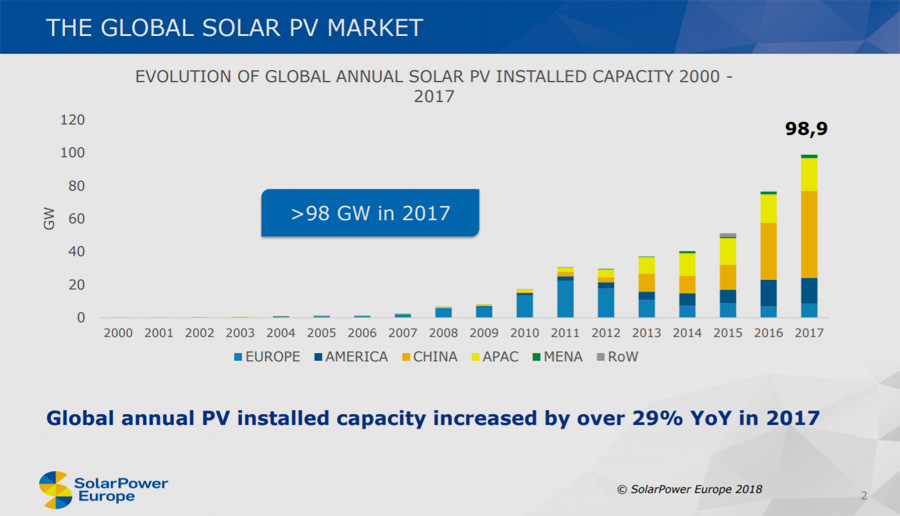 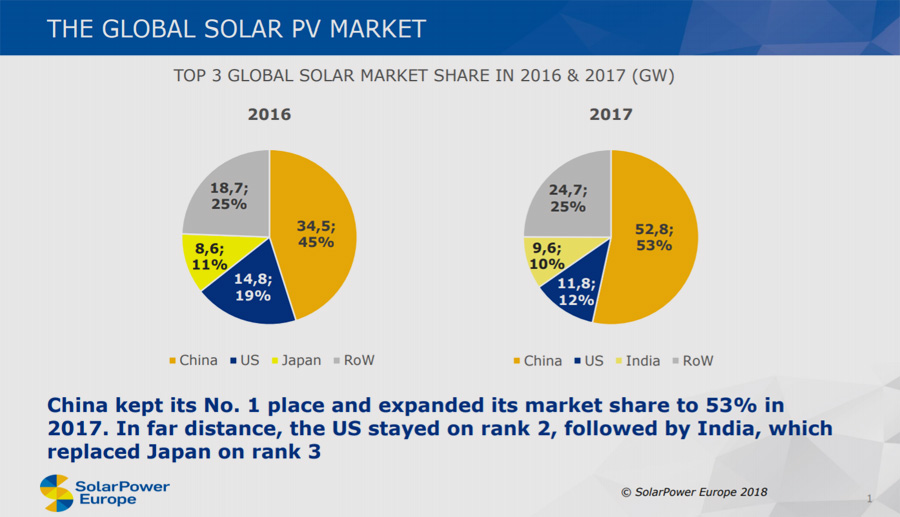