The expansion of renewable energy enjoys high acceptance not only in Europe but also in North America, Australia and New Zealand. This is shown in an analysis of relevant surveys by the German Renewable Energies Agency (AEE).

The results are compiled in the new AEE background paper “Opinions on Renewables – A Look at Polls in Industria¬lised Countries”. As can be gauged, the renewables meet with high rates of approval regardless of the country’s current state in development of renew¬able energy sources. This approval is in most cases well over 80 percent. “Our analysis shows that the large majority of citizens in important in¬dustrialised nations want an Energiewende,” explains AEE Managing Director, Philipp Vohrer.

The AEE analysis of around 15 surveys from ten countries, which is offered in both German and English, focuses on the socio-political acceptance of renew-able energies. This covers the acceptance of individual renewable energy tech-nologies in general and also the approval of certain promoting measures. The highest approval for the expansion of renewable energies was registered in Germany, closely followed by France and Japan. However, this large approval for the expansion of renewables is not only found in France, but also in other European countries whose policies support the further support of nuclear energy, for example in the United Kingdom.

Expansion Goals in Focus
Despite the massive approval from EU citizens of national renewable energy goals from their governments, the heads of state and government decided differently in Brussels: After 2020, there are currently no binding EU targets for the further expansion of renewable energies in EU member states. The only goal set to date is a share of at least 27 percent of final energy consump¬tion from renewable sources by 2030 in the European Union as a whole. A different approach is pursued in North America, where concrete expansion goals for renewable energy have been set by state and provincial govern¬ments. These goals also meet with very high approval; however this approval is also connected to the possible effect on the energy bill.

Snapshots and Developments Over Time
The surveys are snapshots, but some countries’ developments can be traced over several years, for example in Germany, the United Kingdom, France and the United States. According to a survey from the Gallup Institute, environ¬mental protection has become more important to people in the United States than the continued exploitation of fossil fuels like oil, gas or coal. Whether this is because of the low cost of oil, an increased awareness of climate change, or better availability of renewable energies cannot be inferred from the polls.

Overall the analyzed polls show that people do not have any reserve when confronted with the dynamic development of renewable energies. “At the G7 Summit in June 2015 in Elmau and at the UN Climate Conference, the inter-national community committed itself to decarbonisation and to limitting  global warming. These decisions need to be followed by actions. The people support the necessary strong development of renewable energies,” stresses Vohrer.

RENEWS KOMPAKT: “OPINIONS ON RENEWABLES – A LOOK AT POLLS IN INDUSTRIALISED COUNTRIES – STRONG SUPPORT FOR RENEWABLES IN MAJOR WESTERN ECONOMIES” 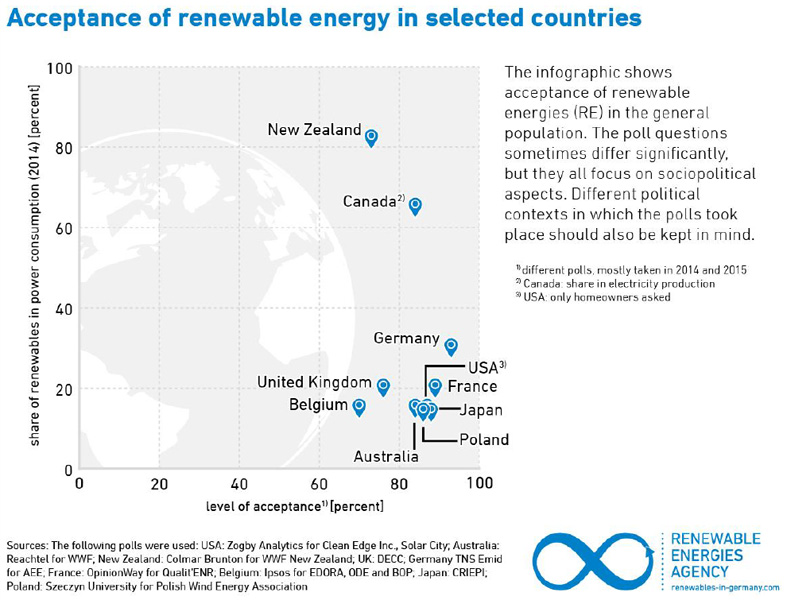 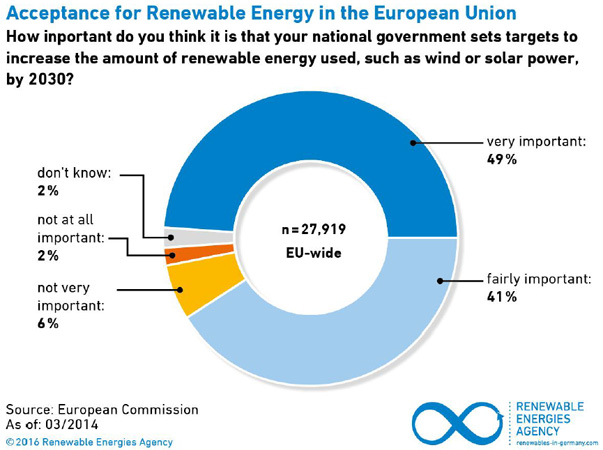