Global energy-related carbon dioxide emissions were flat for a third straight year in 2016 even as the global economy grew, according to the International Energy Agency, signaling a continuing decoupling of emissions and economic activity.

This was the result of growing renewable power generation, switches from coal to natural gas, improvements in energy efficiency, as well as structural changes in the global economy.

Global emissions from the energy sector stood at 32.1 gigatonnes last year, the same as the previous two years, while the global economy grew 3.1%, according to estimates from the IEA. Carbon dioxide emissions declined in the United States and China, the world’s two-largest energy users and emitters, and were stable in Europe, offsetting increases in most of the rest of the world.

The biggest drop came from the United States, where carbon dioxide emissions fell 3%, or 160 million tonnes, while the economy grew by 1.6%. The decline was driven by a surge in shale gas supplies and more attractive renewable power that displaced coal. Emissions in the United States last year were at their lowest level since 1992, a period during which the economy grew by 80%.

“These three years of flat emissions in a growing global economy signal an emerging trend and that is certainly a cause for optimism, even if it is too soon to say that global emissions have definitely peaked,” said Dr Fatih Birol, the IEA’s executive director. “They are also a sign that market dynamics and technological improvements matter. This is especially true in the United States, where abundant shale gas supplies have become a cheap power source.”

In 2016, renewables supplied more than half the global electricity demand growth, with hydro accounting for half of that share. The overall increase in the world’s nuclear net capacity last year was the highest since 1993, with new reactors coming online in China, the United States, South Korea, India, Russia and Pakistan. Coal demand fell worldwide but the drop was particularly sharp in the United States, where demand was down 11% in 2016. For the first time, electricity generation from natural gas was higher than from coal last year in the United States.

With the appropriate policies, and large amounts of shale reserves, natural gas production in the United States could keep growing strongly in the years to come. This could have three main consequences: it could boost domestic manufacturing, supply more competitive gas to Asia through to LNG exports, and provide alternative gas supplies to Europe. US and natural gas prospects will be explored in details in the next World Energy Outlook 2017.

In China, emissions fell by 1% last year, as coal demand declined while the economy expanded by 6.7%. There were several reasons for this trend: an increasing share of renewables, nuclear and natural gas in the power sector, but also a switch from coal to gas in the industrial and buildings sector that was driven in large part by government policies combatting air pollution.

Two-thirds of China’s electricity demand growth, which was up 5.4%, was supplied by renewables — mostly hydro and wind – as well as nuclear. Five new nuclear reactors were connected to the grid in China, increasing its nuclear generation by 25%.

“In China, as well as in India, the growth in natural gas is significant, reflecting the impact of air-quality measures to fight pollution as well as energy diversification,” said Dr Birol. “The share of gas in the global energy mix is close to a quarter today but in China it is 6% and in India just 5%, which shows they have a large potential to grow.”

In the European Union, emissions were largely stable last year as gas demand rose about 8% and coal demand fell 10%. Renewables also played a significant, but smaller, role. The United Kingdom saw a significant coal-to-gas switching in the power sector, thanks to cheaper gas and a carbon price floor.

Market forces, technology cost reductions, and concerns about climate change and air pollution were the main forces behind this decoupling of emissions and economic growth. While the pause in emissions growth is positive news to improve air pollution, it is not enough to put the world on a path to keep global temperatures from rising above 2°C. In order to take full advantage of the potential of technology improvements and market forces, consistent, transparent and predictable policies are needed worldwide. 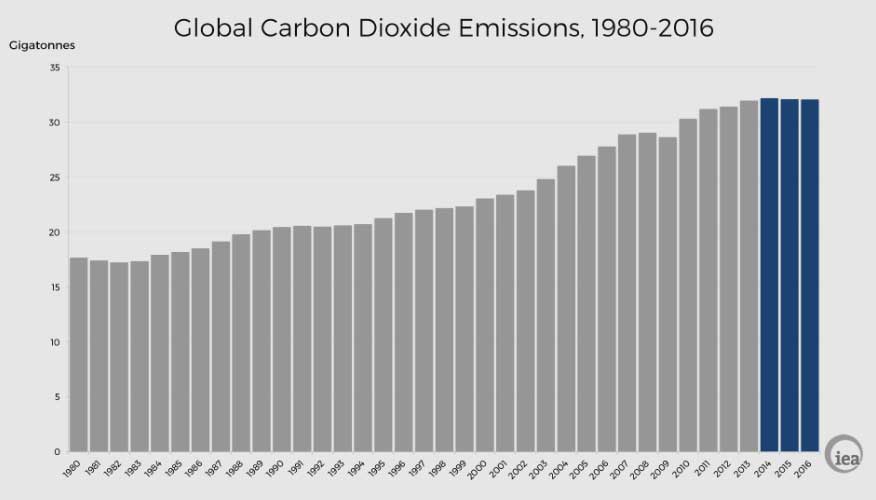