The Institute for Energy Economics and Financial Analysis (IEEFA) published a report today that describes how the rise of renewable energy is disrupting electricity markets worldwide.

The report, “Global Electricity Utilities in Transition: Leaders and Laggards: 11 Case Studies,” documents a pace of change in Asia, Europe, the Americas and Africa that has surprised almost everyone, driven by technological advances and declining costs in wind- and solar-power generation.

The combined loss in market capitalization of the underperforming utilities covered in the report from 2007-2016 totaled US$185 billion.

“From Europe to Asia to the Americas and Africa, wholesale electricity prices are being pushed down by the rise of renewable generation,” said Tim Buckley, lead author of the report and IEEFA’s director of energy finance studies, Australasia.

“Developers of renewables can now consistently outbid fossil fuel-based generation, in no small part because renewable generation has no fuel costs.

“Crucially, renewables need only capture a relatively small market share for market disruption to occur, and for it to continue.

While it may take decades yet for renewables to become the dominant form of generation globally, their presence today is permanent and their advance inevitable,” Buckley said.

“Electricity utilities still considering how and when to embrace the global shift toward renewables would do well to accelerate their transition if they are to avoid the financial damage typically incurred in stranded-asset write-downs of late movers,” the report concludes.

Additional highlights from the report: 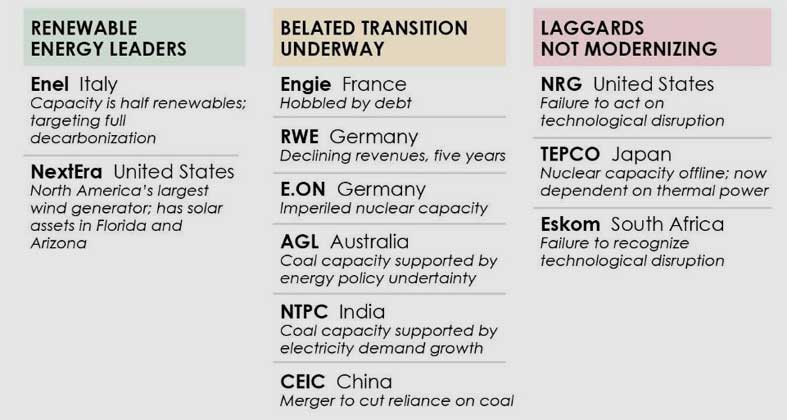 The Institute for Energy Economics and Financial Analysis (IEEFA) conducts research and analyses on financial and economic issues related to energy and the environment.