From today onwards you can check your bank in Germany too. Germany is the 8th country to release its Fair Finance Guide. The first free consumer portal rating the social and environmental commitments of German banks sees GLS Bank and Triodos Bank in the lead.

On today’s World Consumer Rights Day, a coalition of German non-governmental organizations (NGOs) is launching the first free online portal reviewing German banks’ social and ecological guidelines: www.fairfinanceguide.de. Until today there has been no clear method for bank customers to collect independent information about how their banks consider human rights and environmental standards. But the demand by the public for increased social responsibility by their banks is growing. Representative surveys show that about 60 % of the German public would change their bank if it engages in food price speculation or invests in weapon manufacturers. Against this opaque background, the Fair Finance Guide Germany provides bank customers with a ranking of eight German banks’ policies based on detailed research analysing over 240 criteria. The result: GLS Bank and Triodos Bank are the frontrunners, whereas Pax-Bank scores lowest.

“Bank customers have the right to know the guidelines a bank applies, and to which companies a bank provides financial support, this is also true for private pensions,” says Thomas Küchenmeister, managing director of Facing Finance e. V., the organisation coordinating the Fair Finance Guide Germany. “Banks play a central role in the transformation to a more sustainable economy. For this reason, social and environmental criteria need to be an integral part of their business model. If banks are unwilling to implement these standards on their own, sooner or later their customers will force their hand – and we seek to enable this process”, says Küchenmeister.

Of all the banks investigated, the GLS Bank and Triodos Bank guidelines fulfil the most evaluation criteria investigated under the topics of the Fair Finance Guide. They lead the ranking, followed by the Protestant KD-Bank. The Catholic Pax-Bank however, ranks lowest. “The public guidelines of PAX-Bank have so far been considered to be largely vague and unspecific. In addition, the PAX-Bank was the only bank unwilling to enter into constructive dialogue about the results of the evaluation”, regrets Rank a Brand’s Mario Dziamski.

Private commercial banks, public banks, as well as cooperative institutions, have, to varying degrees, huge deficits in terms of the implementation and transparency of social and environmental guidelines for sensitive and controversial sectors, for example mining and power generation. “Our investigation shows that Deutsche Bank, Commerzbank and DZ Bank invest in or finance controversial companies despite policies to the contrary”, criticizes the project lead of the Fair Finance Guide Germany, Sarah Guhr from Facing Finance.

“Looking at the commercial banks the LBBW ranks lowest, even though the bank is a major player in financing renewable energy and has implemented a sustainability system”, says Antje Schneeweiß from Südwind. The reason for this is that the LBBW does not publish strict guidelines for many industries and business sectors, which require the bank to comply with norms such as the ILO’s core labour standards. Furthermore, the bank is not willing to restrict it’s financing of weapon manufacturers, beyond excluding cluster munitions, land mines, and countries under embargo, as Schneeweiß says.

Banks should also give greater consideration to climate policy. “The Paris Agreement demands a climate-friendly restructuring of global financial flows. This requires banks to be more transparent about the risks related to fossil fuel investments, to restrict climate-damaging investments, and to push green investment opportunities. The top ranking banks in the Fair Finance Guide are clearly shown to be more ambitious than the other banks”, says Alexander El Alaoui, Co-Author of the study from Germanwatch. 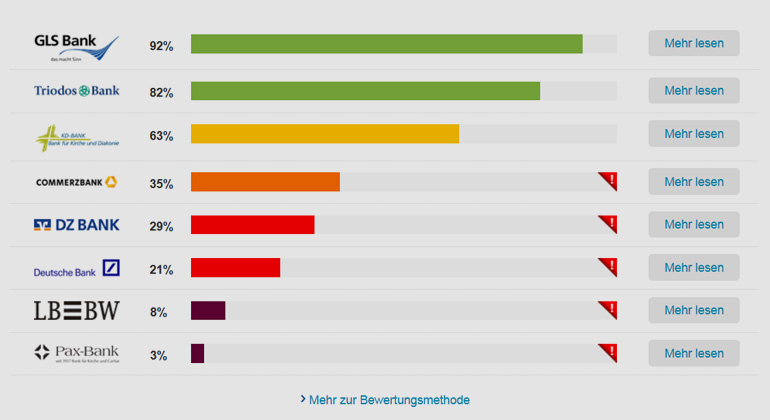